When I wrote about the Points & Money award changes last week (read more here), I promised to have comparison between number of hotels how many points were required for awards on February 28 and after Hilton had moved to the new award schedule on March 1.

I just tabulated the differences for the hotels listed below and was somewhat surprised with the findings. Note that I searched for fifth night free awards for August 18 – 23, 2017.

Here’s the sample of 60 hotels: 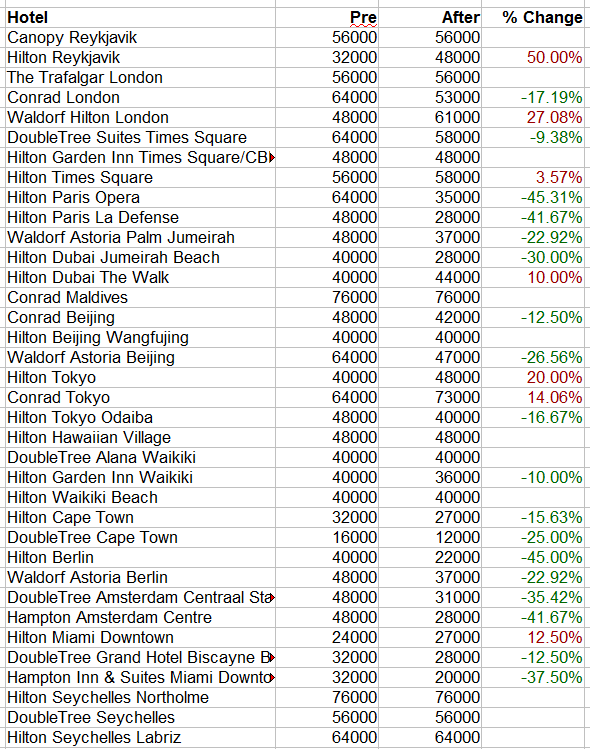 Those hotels that don’t have any changes are likely at their “category” maximum price.

When Hilton Honors announced this change and removed all the award categories, they promised that no one hotel would cost more than their previous category maximum. How long this will last? Nobody knows.

This change is beneficial for those that book cheap hotels using points. Your point is valued around half a cent each. There won’t be difference for those that always book during the high season when the paid rates are expensive. The point price is then at the category maximum.

Losers are those that book hotels that are expensive that previously weren’t pricing at the category maximum, as was my booking for the Hilton Reykjavik that went up by 50% by this change. The previous Points & Cash awards that were often good value are scrapped and replaced

Previously there were no advantage of booking an award room early besides availability that may disappear. Now that the non-maximum rates are directly tied to the paid ones, booking early ma save you points.

Here are the previous award categories with seasonal pricing:

I am not personally sure if I like this change or not. The sample above indicates that on average for these hotels and the August dates, the price using points has gone down and often significantly.

My personal use of points is different, however. I only use them when the paid rates are very expensive and using points makes most sense. As long as Hilton Honors keeps the previous category maximums in place and don’t move hotels up in award categories that are supposedly abolished, this change is mostly non-event for me.

If you're traveling even on mainline airlines such as British Airways or Lufthansa these days you'll find that many if not all of their...