American Airlines AAdvantage has sent out new membership cards to their lifetime status members that from now on won’t include neither an expiration date or a designator of lifetime/unlimited status validity. 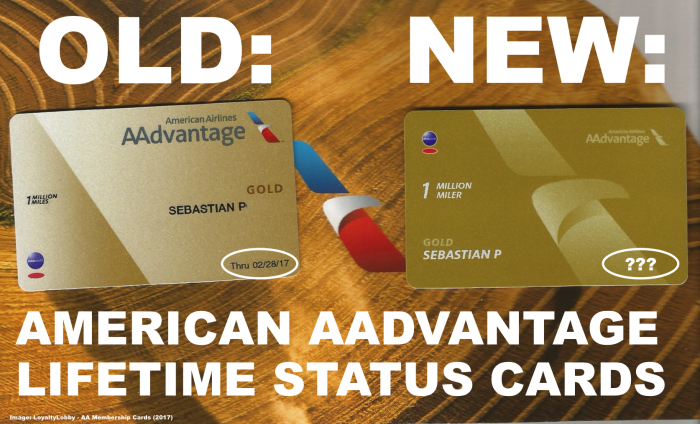 This might become a serious problem especially for those who hold Lifetime Platinum (2 Million Miles+) status and seek to use their card in order to gain lounge access.

When I opened my mailbox today and found the letter I was actually surprised that American was so ‘fast’ this year as in the previous years I haven’t received anything until the summer.

I’m not an active frequent flyer of American Airlines anymore and maybe use them once or twice a year even though I still have Lifetime Gold Status with AAdvantage as I flew them a lot between 2006 and 2012.

Back then you were able to earn Lifetime Status as soon as you had 1 Million Miles for Gold (oneWorld Ruby) and 2 Million Miles for Platinum (oneWorld Sapphire) and it didn’t matter how these miles were accumulated. All miles added to the account counted towards the lifetime counter including bonus miles from Elite Bonus (100% as Platinum/Executive Platinum), purchased miles, credit card spend, retail promotions etc. You can learn more about Americans Million Miler Lifetime Program here.

I never had a credit card with American Airlines or one of their financial partners (usually Citibank depending on the country) but was still able to clock in ~ 1.2 Million Miles with AAdvantage before the system changed. Nowadays only the flown miles count towards the lifetime status and even though my RDM Bonus Miles balance grew since then the lifetime balance pretty much stood still since I moved to British Airways Executive Club as my primary program.

As a low Lifetime Gold I don’t expect to be affected by the new changed too much but when I read the letter that came with the new card I instantly smelled trouble for Platinum members who enjoy lounge access. 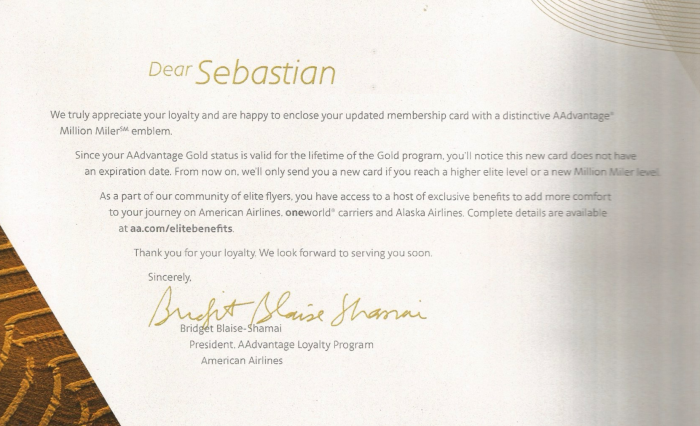 There will be no more annual cards sent out which sort of makes sense but at the same time the card doesn’t show an expiration date anymore. Neither does it say the Status is “good for life” and that no replacement is needed.

Platinum members who use the card for lounge access might find themselves confronted with overly rigid personell who will refuse them entry. For example when I started to collect with British Airways I always showed my AA Executive Platinum Card at the lounge to gain access until I was Emerald with BA as well. This will very likely prove difficult with a non-designated membership card.

I’m not sure why AAdvantage didn’t design these cards in a way that it actually shows either “Lifetime Gold/Platinum” or just added a pro-forma expiration date of 12/2099. They should correct this design before members run into issues.

Every now and then I’m still being asked for the card even if the status shows on the boarding pass. Unlike Hotel Loyalty cards which I never carry around, the airline membership cards are always in my travel wallet just in case a “lounge dragon” at the reception is overly eager.