This weeks Compensation Clinic is making a stop in Seoul, South Korea where yours truly had a very terrible stay at one of the two aloft properties in town (Gangnam District).

Remember that our readers can also always email us, send us a Facebook message or Tweet about the issues you have with hotels, airlines and other travel providers. We’ll feature one new Compensation Clinic each week.

Seoul is a beautiful city if you appreciate certain aspects of it, especially culturally and that’s why I always like to return. Hotels however can prove difficult and I came across only a few properties that really reflected what one would call professional, international standard.

Since SPG has quite a few properties in Seoul I decided to try the Aloft Seoul Gangnam for a night which showed up in the hotel pool the company offers. The previous night was a private stay where I used points at the Intercontinental Grand Parnas, probably my favorite hotel in that part of town.

The check-in at the aloft was already rocky with the associate actually charging my credit card instead of just taking an authorization. I was assured it wasn’t a charge, sure enough the hotel needed to refund the full amount. 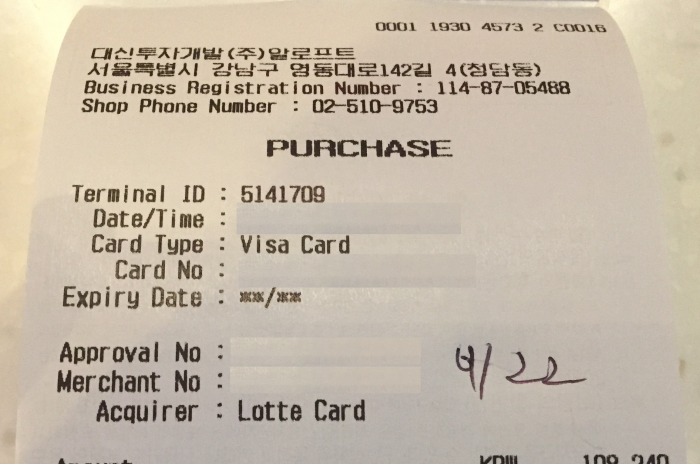 I don’t like this at all because usually I give remaining currency to the hotel before I leave to pay part of the bill so I don’t have to drag it around until the next visit.

What’s bothering me most is that these lies “Oh, it’s just an authorization” were kept until the end. The account statement of my Chase Hyatt Card showed clearly that it was a purchase and reversal of the transaction.

The “upgrade” at this aloft was a joke, apparently to a River View to which I say at any hotel: A view isn’t an upgrade. The room was like a tiny box and since I have stayed at multiple aloft before I can say this isn’t the standard for this brand. I’m quite a fan of these select service properties because it’s usually a clean, easy stay for a decent rate with acceptable standards.

The next issue was the alarm clock which rang around 5:45am since it hasn’t been reset from the previous guest visit. Great way to start the day when you just had to get up at 9:30am. Not!

Final straw was the breakfast as I was informed the evening before it would go until 10:30am. When I reached the restaurant at 10:05am it was already taken down as it actually just goes until 10:00am.

I requested to speak to the General Manager of the property because at this point too many things had been piling up. Now the usual Korean spiel (and Asian style in general) comes into play where the person telephones around and speaks for minutes to some person discussing everything apart from the issue. too bad for them if the customer understands what they’re talking about though as in this case. I told the lady to end the call and get management down to the restaurant. It took 14 minutes in total.

The GM was empathetic and I appreciated the time he took to eventually come down and discuss the matter. It’s not his fault that the employees try to give the customer the runaround. I find that in Asia nobody likes to call the boss due to a customer service issue and you almost have to go berserk so they finally relent and call the GM’s office.

I mentioned the issue and that we’d go and have breakfast or early lunch (whatever was available) outside of the hotel. Since I had a meeting at the COEX we ended up eating there and paying ~ 50,000 KRW for 2 guests (a hotel breakfast is charged at 22,900 KRW as per the sign outside).

This is roughly half of the corporate room rate but honestly that’s not my fault and I should have been given the correct timing beforehand. Since I realize the amount is quite high I offered to accept 7,000 SPG points instead which is the equivalent of one free night at this property.

Upon check-out the Assistant Manager offered 3,000 points without even mentioning the email and the receipt i sent. I declined that offer and said it’s either a full reimbursement of the check or the 7,000 points which is already a concession on my part. Eventually he confirmed the 7,000 points credit.

The points credited roughly a week after the stay and I didn’t press in the meanwhile as I was sure I could trust the word of a manager in Korea if he confirms such an offer verbally. There are other countries where I wouldn’t be so sure of it though.

I believe that the compensation in this case was fair and even though on the high side in terms of points value, I value cash much higher and rather have $50 in cash that was my personal money instead of piling up points. With 7,000 points I say it’s a break even for me all things considered. Good thing with SPG is that full points stays are qualifying as well.

To be fair I will likely end up redeeming these point at the same property again so the loss for them is marginal if any. I actually prefer the brand new aloft in Myeongdong (where I was even upgraded to a suite multiple times before as a Platinum) but for convenience and proximity to my appointments I need to use the Gangnam location at least during business stays.