Wall Street Journal (Murdoch’s paper) yesterday had a piece about changes coming and/or already implemented for those wishing to enter the United States. 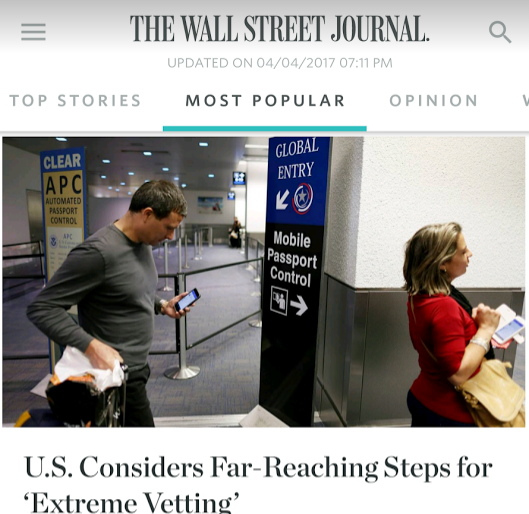 Seems that some travelers are asked to give the agents the passwords for their social media accounts and also financial records.

Here’s an excerpt from the WSJ piece (access here):

The changes might even apply to visitors from the 38 countries that participate in the Visa Waiver Program.

The biggest change to U.S. policy would be asking applicants to hand over their cellphones so that officials could examine their stored contacts and perhaps other information.

A second change would ask applicants for their social-media handles and passwords so that officials could see information posted privately in addition to the public posts.

The effort would be time-consuming, they said and it could drive people with bad intentions to change their practices.

The administration is also working on implementing “ideological test” for people coming to the U.S.

Seems that the current administration is trying to do its’ best to make sure that there is nothing left of the tourism industry in the U.S. that relies on foreigners willingness to visit the country.

The electronics ban already affects travelers coming from select Muslim countries that need to check these items before taking direct flight to the United States. These same electronics are not threat, however, when taking a connecting flight via Europe for example.

The bad guys will make sure that their phones, laptop and social media accounts are clean and only contain material that these immigration agents are advised to be appropriate.

On a positive side, one can expect airfares to/from United States to be lower in the coming months when people fed up with these “extreme vetting” procedures visit other countries and airlines need to fill up their cabins.

Argentina Will Reopen For Neighboring Countries This Summer