British Airways used to have a decent customer service that regulates legitimate complains (such as EU compensation) in a proper manner, but recently more and more people have to take the airline to court. 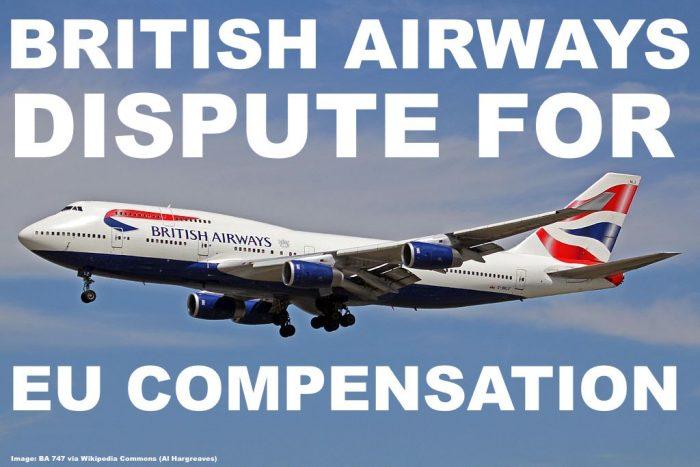 Thanks to the EC261/2004 regulation, the guidelines when compensation from an airline is due are pretty clear and there isn’t really a grey area, yet some carriers try and sit the situation out hoping the claimant will just go away.

I had one such case last November where I was flying on a round trip from Bangkok to Germany and return on an upgraded World Traveler Plus (Premium Economy) ticket which is one of the best value spots in the Executive Club redemption list (the WT+ ticket cost as much in total as the tax for a Business Class Redemption would have been).

The issues were on the way back when I found upon boarding that my seat was broken and there was no other open seat on board the flight, the Supervisor offered to rebook me via Hong Kong to Bangkok which I accepted rather than flying on an immovable Business Class seat on an overnight flight.

That particular day the entire range of BA departures was delayed for no apparent reason, in the end it was announced that we incurred a delay due to no BA Security Team being available to sweep and clear the aircraft. This 3 hour delay caused me to also miss the connection in Hong Kong.

For whatever reason (I guess since the original ticket was Premium Economy) BA refused to rebook me onto Cathay Pacific Business Class at the 5:30pm departure but wanted to downgrade me to regular Economy leaving Hong Kong at 10pm. I refused and said that either I go in Business or in the very least Premium Economy which is available next day at 1pm but in which case British Airways had to pay for hotel and meals. Crazy enough they did just that instead of getting the passenger home, delaying the whole ordeal for another 14 hours (irrelevant for the 600 EUR EU compensation which already kicked in during the original delay).

Escalating the entire issue to British Airways Customer Relations brought no result except them either stonewalling or ‘investigating’ the case without reply.

Here was their final response 3 months after the flight and immediate complaint: 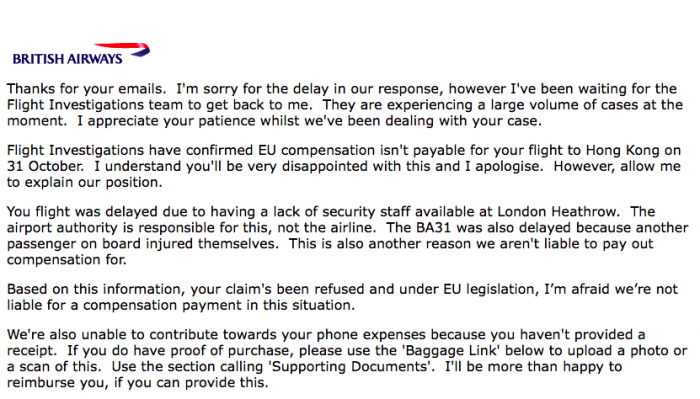 In light of the circumstances and total delay that response is absolute baloney. I decided to forward the case to the national regulators. First to the LBA in Germany since the flight started in Berlin who then forwarded it to their UK counterparts who informed me that in the UK all disputes have been outsourced to a center called CEDR (Centre for Effective Dispute Resolution).

Their email was this:

Should you wish to know more about Alternative Dispute Resolution, the CAA website  provides additional information about the ADR scheme.

Fair enough, I went ahead and filed my case with the CEDR and the website allows you to create a very practical case file with communication windows for all parties involved as well as a dropbox to upload supporting documents for your claim (I submitted flightstats screenshots showing the delay, boarding passes and the new passenger receipt showing INVOL (Involuntary) for the rebooking as well as the hotel voucher for Hong Kong.

Basically after you file a case and it is accepted (not all claims are accepted, they have to fall under the CEDR’s actual authority) the airline has 2 weeks to respond, in this case BA responded on the very last day they need a brief extension of time (a total of 5 business days was granted to them).

Note: If your case is totally unsuccessful you are liable to pay CEDR a 25 GBP fee which is probably to avoid people making frivolous claims. Not sure how they would enforce that payment from complainants abroad but anyway people should only claim a specific amount if it has a solid basis of being a successful claim.

British Airways then took 3 days to upload a settlement offer, confirming they are liable to pay me 600 EUR per EC261/2004 regulation – something they have denied on multiple occasions before.

… The Passenger claims compensation for the delay to BA009 on 31 October 2016. Compensation is not payable as the Passenger did not travel on the delayed service. Also, this flight was not delayed on arrival by three hours or more.

What an absolute nonsense and waste of time. Three months of correspondence for this just to in the end and after taking them on through the CEDR confirm that compensation is actually due. Remember, a month ago their customer relations agent denied that any compensation is due – a blatant lie!

The money has in the meanwhile been credited to my account (only 24 hours processing time within the EU).

One of our readers also had an issue with BA involving an involuntary downgrade that was settled through the CEDR a few months back. I can highly recommend using this service to solve your dispute with British Airways as it seems to be the only channel they actually take serious. Should there be no amicable solution the CEDR administrators have the authority to adjudge a case and decide if and how much compensation is due.

Airlines lie and cheat all the time, even when it comes to cases where compensation to the passenger is clearly due based on the EU regulation in place. They do it because there are no consequences for them doing so and it’s cheaper to sit complaints out and have 95% of the passengers/complainants go away. The 5% that are left over and go through the hassle of taking the airline to court or the regulating agencies are nothing more than calculated cost in a big financial chess game for the airlines.

Sure I could have given the case to one of the known agencies who complain and sue on your behalf but why taking a large cut of the compensation when I know that I’m due the entire amount. It’s likely that BA will also have to pay a processing fee to the CEDR which is probably still cheaper for them than court costs and attorney fees should they lose a case.

Le Club AccorHotels Worldwide Up To 50% Off Private Sales April 5, 2017