A visiting female U.S. citizen who got into a dispute about wait times at Munich Airport (oh, the irony) has been fined 1,200 EUR by a German court after she insulted the Immigration Officer with profanity. 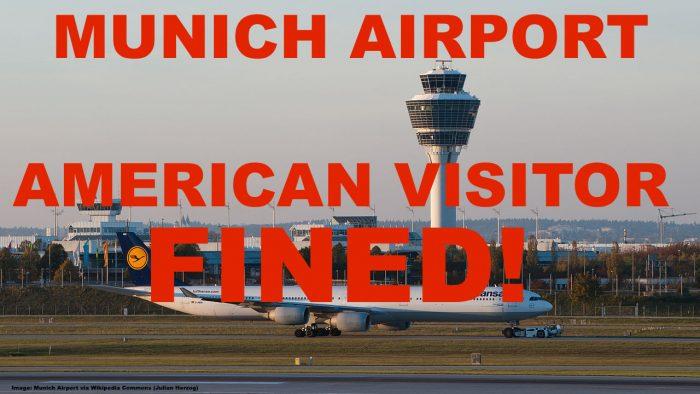 The 55 year old woman was upset about the wait times at passport control and that E.U. Citizens were processed faster through the dedicated lane and called the officer a ‘Piece of Shit’.

Insulting government officers is prohibited and punishable under German law, something that the individual (the term “lady” obviously doesn’t apply here) now got to feel when the court sentenced her in absentia to a fine of 1,200 EUR.

As per the collective German news outlet Presseportal (access here – in German) the incident took place in November 2016.

Translated in excerpts as follows:

A 55 year old female U.S. citizen who transited at Munich Airport en route to Hungary in early November 2016 just received a reminder of better being courteous even and especially when traveling abroad.

Even before the immigration officer was able to make any inquiries about the purpose of her trip and other basic questions that passengers are being routinely asked she already pushed the officer to “hurry up or she would miss her flight”.

She furthermore complained about the fact the the lane to her left (reserved for E.U. Citizens) was processed faster. The officer explained the procedure to the passenger which was not well received either.

After returning her passport the woman attempted to leave the passport control area with a goodbye message of “you piece of shit”. – Not a good idea under any circumstances, in any country as she should well know considering the authority and attitude of immigration officials at U.S. ports of entry. –

The officer immediately acted and initiated proper legal action in the matter. – As mentioned before, insulting government officers as well as any natural person is punishable under German law (§ 185 StGB). –

Now roughly four months after the fact, a German court has found the woman guilty and sent her the appropriate bill: 1,200 EUR fine for her behavior. If the fine isn’t paid the court order will be transformed into an arrest warrant which will undoubtedly create even more troubles for her next European transit.

Traveling tends to get people nervous, riled up and some to lose their manners. It just cries stupidity to think that I could call any police officer, immigration official or other individuals with certain authority such names without having to bear severe consequences.

I can imagine that doing such a thing when attempting to enter the U.S. would result in even more severe consequences as the officers would make it a point to make her life as difficult as possible. Even a U.S. citizen who would approach an officer that way would almost certainly been sent to secondary inspection and they would let her sit there for a couple hours of “inspection”. A foreigner… more than likely the same plus they might very well find a reason to deny the individual entry and have the person removed on the next flight out.

It’s especially ironic considering this coming from an American who probably has no idea about the average wait times and treatment that foreign visitors to the U.S. have to endure. Let’s hope she learned her lesson from this (I somehow doubt it).

In fact if European Airports and Governments wanted to fully reciprocate then the lines would be 2-3 times as long and an Electronic Visa/Travel Authorization similar to the U.S. ESTA mandatory. It’s actually more than overdue.

Marriott Bonvoy previously introduced Annual Choice Benefit-options for members that reach 50 and 75 nights per calendar year and I want to have a...