Another PR Nightmare for United Airlines!

A couple of weeks ago, Sebastian wrote here about United Airlines taking a lot of heat over forcing passengers (who turned out to be traveling on an employee pass) to change their attire before boarding. 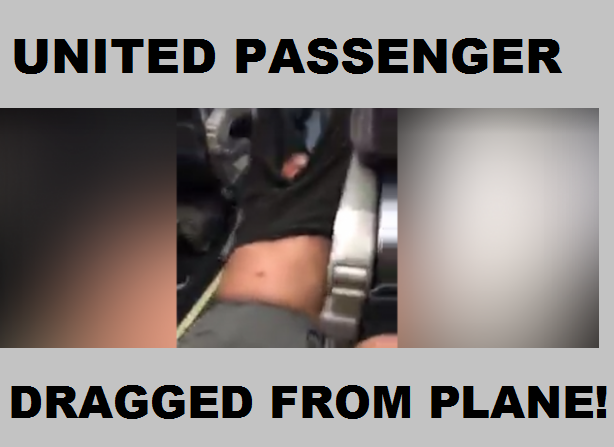 Seems that the United PR department has another nightmare on their hands after videos posted to social media showing a paying passenger being forcibly dragged from his seat and off the plane by security officers is going viral.

However, as with many stories like this, some of the facts are being reported somewhat incorrectly by many of the mainstream media outlets out there.  Here is a video showing the incident from YouTube:

This article here from the Washington Post explains the incident, which took place on United Flight 3411 from Chicago (ORD) to Louisville (SDF) which was scheduled to leave ORD at 5:40pm last night and is operated by Republic Airlines on a 70-seat ERJ plane.  Here is an excerpt from the article:

United Airlines says a man wouldn’t give up his spot on an overbooked flight Sunday.

So, according to witnesses and videos of the incident, he was pulled screaming from his seat by security, knocked against an arm rest and dragged down the aisle and back to the terminal at Chicago’s O’Hare International Airport.

United refused to answer questions about the incident, which horrified other passengers on the Louisville-bound flight. An airline spokesman only apologized for the overbooked flight, and said police were called after a passenger “refused to leave the aircraft voluntarily.”

First, the article explains that the flight was overbooked. Regardless of whether the flight was overbooked or not did not have any bearing on this particular incident. The fact was that because of some other irregular occurrence somewhere else in their network (IRROPS as referred to in the airline industry) United needed to get 4 crew members to Louisville to operate another flight either later that night or the next morning to prevent other cancellations, and given that Chicago is a hub for United, this situation is not too out of the ordinary.

Aside from that, there were other details that were left out by many of the mainstream media articles. United initially offered passengers a $400 voucher and a free hotel stay and accommodations on a flight the next afternoon, then increased the offer to $800 when they didn’t have any volunteers.  After no one took the offer, they announced they would randomly select passengers to deboard.  The first two selected left without incident. The next selected was the man in the video, who refused to get off because he “had to get to a hospital to see patients in the morning”.  After two security officers tried to reason with him to leave, he still refused, and a third was brought on and they forcibly removed him from his seat causing some injuries.

After their PR department was silent about this, after the video went viral, they posted a response earlier this afternoon from CEO Oscar Munoz: 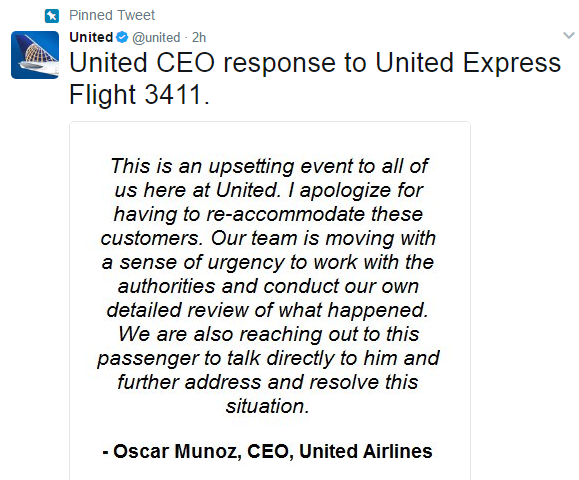 So this incident brings up some questions, which we have done our best to explain below, but we’ll leave it up to you to also provide your opinions and comments:

Why do airlines overbook flights?

Even though the situation here is slightly different, overbooking is a general practice in the industry, as there are always a certain percentage of people that don’t show up for flights, either because of missed connections or travel plans changing resulting in taking an earlier or later flight. Computer models are usually pretty good at predicting the percentage of no-shows for a particular flight on any given date/time, so this reduces the potential for overbookings, but statistics can vary, especially for smaller planes.

The US Department of Transportation (DOT) reports that out of 613 million passenger boardings in the US in 2015 there were only 552,000 denied boardings, and only 46,000 (less than 10% or 1/100th of 1% of total boardings) were involuntary. If there were laws in place to prevent airlines from overbooking, these situations would happen even less, but it would also artificially drive up the cost of airfare as airlines would sell less seats.

Why aren’t there laws to protect passengers more in situations like this?

Although there is no law in the U.S. that dictates how airlines should handle overbooking situations, there is a federal law that entitles passengers to cash compensation (not airline vouchers) of 200-400% of the value of their one way fare (depending on length of delay) if they are involuntarily denied boarding on a flight whether they are a paid passenger or flying on an award ticket.  The U.S. DOT rules on overbooking are here.  There are some exceptions to this for smaller planes that sometimes require passengers to deboard for weight and balance or other safety issues.

What could airlines do better to avoid this type of situation happening?

I’ve been in several situations where a flight was oversold and volunteers were asked at the gate if they would be willing to give up their seat in exchange for a voucher to be used on a future flight. Most US airlines will also ask at checkin (either online or at the airport checkin desk or kiosk) when there is potential for an oversell if you are willing to give up your seat in such a situation. This can potentially separate out passengers who really need to get to their destination on time vs those who may be willing to take a later flight in exchange for compensation. But sometimes last minute events like this can really shake things up.

However, it only takes 20-30 minutes to board an ERJ; I would think quicker internal communication from United after they found out that this crew needed to be repositioned could have allowed gate agents to get passengers to give up their seats before the plane was boarded.

There are probably a number of things that could have prevented this situation from blowing up like this. But I also find it hard to believe that on a plane of 70 people, not one was willing to give up their seat for an $800 travel voucher that would come with very few restrictions (with the exception of the value likely expiring in a year). Perhaps most passengers think that there are more catches to using these vouchers than there are and think it would be more of a hassle than it’s worth.

Maybe the DOT should think about revising the rules of what airlines should offer passengers for voluntary bumps and not just involuntary situations.  If passengers were offered a higher voucher amount or a cash payment instead, I’m sure they wouldn’t have had as much trouble finding volunteers to take the offer. 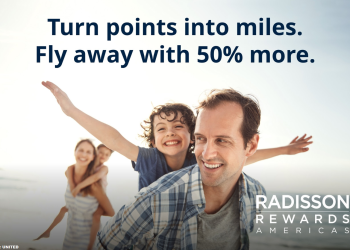 United Airlines and Radisson Rewards Americas have launched a conversion offer for transactions through October 31, 2022. There is a...