Thai Airways and Bangkok Airways today signed a code-share agreement for placing codes on each others flights for initially March 26 – October 26, 2017, and renewable there ever after. 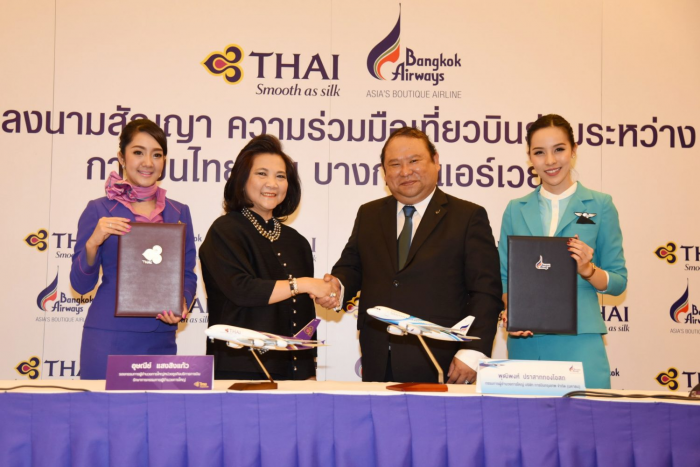 Here are the routes:

Roundtrip international flight on the route Bangkok-Singapore and other future routes are being considered.

Mrs. Usanee Sangsingkeo (second from left), Acting President of Thai Airways International (THAI), said that THAI and Bangkok Airways have had a good long-standing relationship for more than 20 years.  The two air carriers entered into an interline agreement in 2003, which made it possible for passengers to purchase air tickets and conveniently travel on connecting flights between THAI and Bangkok Airways, which help to boost commercial sales for both airlines.  The agreement between THAI and Bangkok Airways has further developed into a code-share agreement in order to better facilitate expansion in the area of commercial sales and increase passenger convenience on more flights that connect between the two air carriers.  This also helps strengthen the Thai airline industry, supports the Thai economy, increases tourist arrivals into the country, and elevates Thailand as the aviation hub of ASEAN.Mr. Puttipong Prasarttong-Osoth (second from right), President of Bangkok Airways Public Company Limited, said that Bangkok Airways continually works towards making product and service improvements for maximum passenger satisfaction. Building code-share agreements with leading international airlines is to increase its capacity through the route network and sales. What is most important is to make travel convenient for passengers traveling inbound from destinations across the world and to connect them to various final destinations operated by the airline.  Currently, the company has entered into code-share agreements with 22 leading air carriers worldwide.

Bangkok Airways has taken the important step to enter a code-share agreement with THAI which is the national carrier, a leading international airline with international service standards, and operates to 61 destinations across the world and Bangkok Airways’ current network covers more than 12 domestic and 16 international destinations with strong connections to ASEAN countries and the airline continues to expand its route network.  This cooperation will help to strengthen the relationship between both airlines as well as their respective networks, successively elevating the quality of service for Thai air carriers, which supports Thailand as the aviation hub of ASEAN.

For more information, reservations and ticketing, passengers may visit www.thaiairways.com or call the THAI Contact Center at Tel. 02-356-1111 or through travel agents across Thailand.

Passengers may also visit www.bangkokair.com or call the Bangkok Airways Call Center by calling 1771 24 hours a day (at a service charge of 3 Baht nationwide, for landline calls only).

Thai Airways and Bangkok Airways have interlined already for a long time. This code-sharing already started couple of weeks back and I was surprised to see TG code on some PG flights to Phuket in late March (had to get there to start one Malaysia Airlines ticket).

Bangkok Airways has code-share agreements with high number of airlines that use the “boutique” airline to get passengers to various destinations within Thailand and in nearby countries.

Members that use Star Alliance frequent flier programs and have Thai flights operated by Bangkok Airways or even Thai Smile are not eligible for any additional benefits that come with Gold status. Bangkok Airways, however, operates domestic and international lounges in Suvarnabhumi airport that are open for all passengers flying the airline.