Would You Visit North Korea? I Will, This Week.

They are testing rocket engines for their nuclear warheads . The US government is sending a warship to the Korean peninsula. The newspapers are talking of an increased risk of accidental war. And I will be there this week hoping there are no major fireworks during my stay. 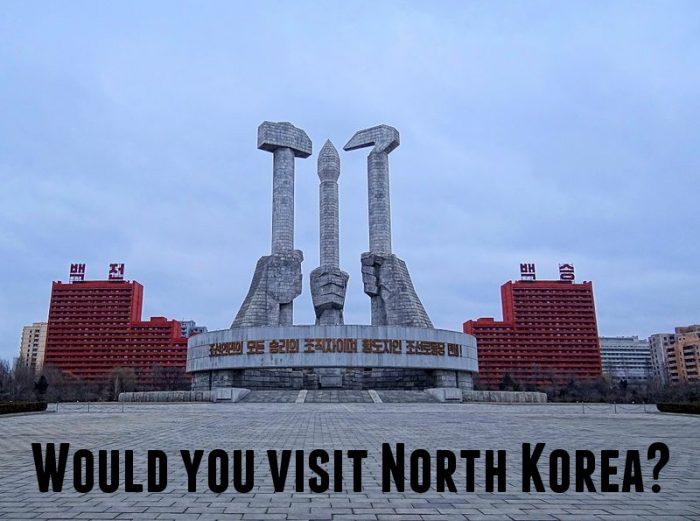 I was planning for a lovely Easter break in Tuscany when a friend of mine suggested to go to North Korea instead. He had been planning this trip for almost a year, and at the moment I thought that if I was ever to do such trip, better do it with people I know and trust.

North Korea is a very secluded country. The government limits the access of international media and the information that comes out through the official channels is consciously selected and highly curated. Tourism in North Korea is controlled by the government, and only about 1500 Western tourists visit the country each year.

My friend had previously used the services of Young Pioneer Tours (a China-based travel agency specialized in “budget travel to destinations your mother would rather you stayed away from”) on a previous trip to Kazakhstan. This agency is one of the handful of private tour operators that help provide access to North Korea. The agency offers tours of different duration, most of them configured around sporting events or milestone national celebrations.

The first step of the booking process was getting in touch with the agency. They have a group of English-speaking staff that act as liaison with the clients and also as tour conductors in North Korea. When we expressed our interest in one of their offerings, they sent us detailed information not only of the itinerary and costs, but also of what to expect in terms of access, guidelines on what you could or could not do once in the country and especially the red lines you are not supposed to cross during your stay.

All tour options available were priced in Euros, and all of them included accommodation and meals during the stay, as well as a return train ticket between Beijing and Pyongyang. Not amused with the idea of a 24 hour ride on a Chinese train, we opted for adding a return ticket on Air Koryo between PEK and FNJ as an add-on to the tour (mandatory for US citizens, which can only access the country via a flight). And who am I kidding? I want to ride that airline, have their infamous burger and write a review about it! The agency also deals with the visa request process (for a fee).

The payment options offered by the agency included PayPal and wire transfer, definitely being PayPal more convenient (cheaper and faster than an international bank transfer). They also offered the possibility of dividing the payment in various installments.

Two weeks ago they opened a Facebook group for all the attendants to answer the multiple questions that can arise from such trip (there have been plenty), and last week we got our visas and our Air Koryo e-tickets.

I am typing this on board a plane on my way to Beijing, and as I will lose all connectivity with the outside world for six days (there is no Internet access in North Korea), John will post this article on my behalf once I am already in the country. If I make it out of the country in one piece, I promise you will get my impressions on such a unique experience.

I am crazy. It is the only plausible explanation. I am at the same time excited and distressed about this trip. I am not only traveling in space to a new country, but also in time to a place stuck on the darkest moments of last century’s cold war. Wish me luck!

Preferred Hotel Group iPrefer 25,000 App Booking Bonus For A Reservation Made By April 21, 2017