This weeks Compensation Clinic comes with compliments of the Sheraton Kobe Bay Hotel & Towers in Japan where my stay was starting and ending on a rather bitter note. 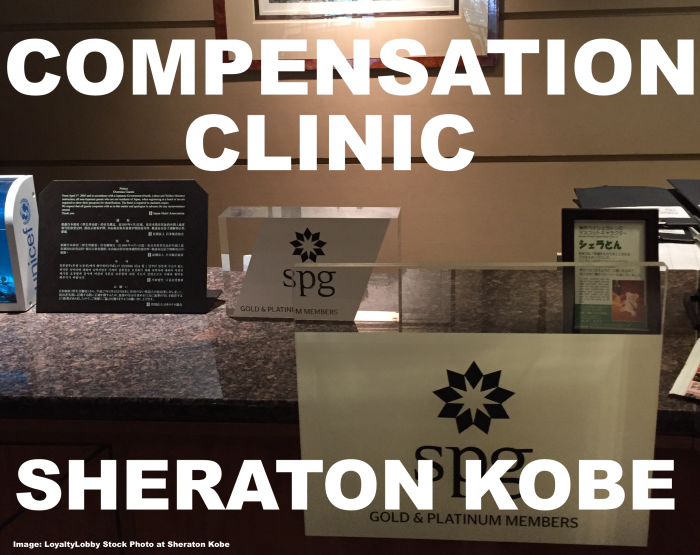 Check-in process, Room allocation, Breakfast and then the Check-Out were all completely unacceptable for a Sheraton Hotel and the really isolated location didn’t help to make it better either.

Sometimes a stay already starts bitter when you’re being told point blank “Check-Out time is 12:00pm” despite being a Platinum member. This is exactly what happened at the Sheraton Kobe, in the Club Lounge no less.

At this point a room upgrade wasn’t even discussed yet and this property is one of the few that doesn’t update the Room Category and Room # to be visible online or in the SPG App. The App is a useful feature nowadays to see in advance when the hotel upgrades you (or not).

Needless to say that greeting didn’t go over well and I simply stated that the Sheraton Kobe is neither a resort or conference center and that the standad platinum benefit at 4pm checkout applies without limitations.

The club attendant then said if I insist on a late checkout there would be no upgrade beyond the standard room booked and even those they only had with two twin beds. At this time check-in was more or less on red alert when I aborted it and had her call the Front Office Manager. After then it was suddenly not an issue anymore to both upgrade the room and to apply a late check-out (which I didn’t need as I checked out at 12:30pm but that’s not the point).

The benefit letter I got was complete nonsense. I didn’t any of the listed in room amenities.

The Club Lounge also has very strange hours of 17:00-19:00h for the evening cocktail. At the time of check-in (19:10) there were only peanuts, crackers and some wine on the table.

At breakfast time the lounge was packed so I ventured downstairs to the restaurant where a super long lineup formed it’s was through the lower lobby. After a 20 minute wait I was seated at a table – without cutlery. Coffee and tea have to be taken by the guest from a machine and half the dishes were gone due to the masses of people attacking the buffet. I ended up having some orange juice, a miso soup and some salad which was pretty much all I could gather until the buffet closed on time at 10:30am. No idea what they did with the people behind me in the line.

Check-Out at the Club Lounge was impossible. There were three parties and it took an eternity for the agent to check even one couple out. Not sure if it’s necessary to do everything in such detail and to engage in endless small talk if it’s obvious there are three more parties waiting for the one attendant.

At the Front Desk itself there is a shiny SPG Gold & Platinum Members sign but the counter isn’t manned. I requested the Front Office Manager again (turned out the gentleman from the previous evening was the Duty Manager). I laid out the issues in detail and requested something to be done about it but didn’t request specific compensation (I tend to do that only if there is no movement from the management of the hotel what offer).

The FOM discounted the daliy rate by 50% which represents a value of 7,603 JPY.

The hotel also paid for the taxi the my next hotel (Crowne Plaza Kobe) which showed another 4,500 JPY on the clock.

There are only a few international chain hotels in Kobe and I found the Crowne Plaza a bit better and more centrally located (right next to the Shin-Kobe Shinkansen station). In hindsight I’d probably rather book a basic Japanese hotel instead of the Sheraton if I had a choice.

This was a very generous compensation from the manager at Sheraton Kobe and the stay also posted to my SPG account with the full rate so no points were lost in the process. The value of the compensation combined equaled almost a free stay.

I found this to be much more effective than a SPG points credit and also much cleaner in terms of the account. Sometimes I favor in house compensation for the ease of getting it done over points credits.