Plans call for the airport to finally receive a proper public transit access with a viable terminal connection that would replace the current bus services which provide access via shuttle (a real pain).

It’s been years since I last used public transit as an experiment to get to LAX since the matter popped up in my news feed every now and then. It wasn’t a horrible experience but far from practical and I only had one small suitcase, however I had the chance to talk to other people on the line who took the trip on a regular basis and reported that the stations often don’t feel very safe during early morning and nighttime plus the hassle of actually accessing the terminal from the Crenshaw station via bus shuttle.

Most of this is supposedly going to change when the new facilities develop within the next 6 years or so.

The Blog of LA METRO called the source (access here) unveiled the updated plans on Tuesday and it looks really nice.

… The station will be where riders on the Crenshaw/LAX Line, Green Line and local buses will transfer to the future LAX people mover that will serve the airport terminals. The renderings show the design of the station to date with a lot of work still to be done.

The project is funded by Measure R and Measure M and will be built separate from the Crenshaw/LAX Line. Los Angeles World Airports — which operates LAX — is aiming to have the people mover complete by 2023. …

I think the only thing that really stands out apart from cosmetic improvements of the Crenshaw/Aviation stop will be to have the actual people mover in place and that won’t be happening until 2023.

The plans to remodel and shake up the public transport access to LAX have been in the making for a while now. Details about the entire project can be seen in this PDF:

The design looks pretty cool and if people are willing to accept public transport as an alternative to the often choked 405 Freeway or local access via Sepulveda/LaCienega then it might help to ease the traffic situation at LAX at the same time which has traditionally been a mess (but which airport isn’t really). 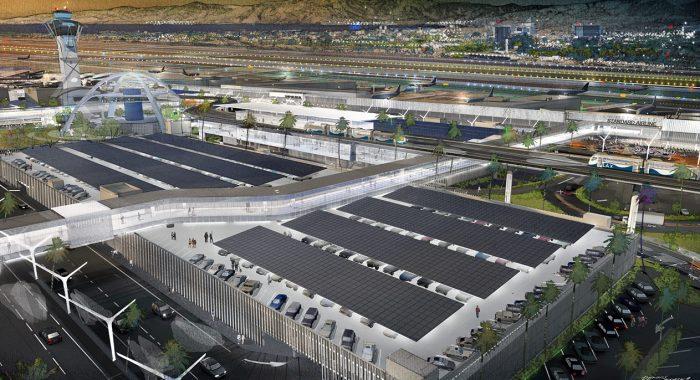 However keep in mind these are renderings and all of us familiar with LAX and the dimensions of that Mega Airport know that walking longer distances is a real pain so the stops of the people mover are better in close proximity to the actual terminals.

Public transport has a bad reputation in Los Angeles, however it improved in the past decade or so after being neglected for long and mostly used by the low income population to move around the city. I never found it to be really that bad but again, LA is a huge city and relying on public transport (bus, train or a combination of both) means you need to budget even more time than for a regular commute with your own car.

I hope this project comes to a good end and makes arriving and departing to/from LAX a bit more pleasant again. Right now the terminal area is covered with construction and accessing the terminals sometimes takes forever, be it by car or hotel/rental car shuttle bus. Are you using public transport to go to the airport sometimes? Comment below!