Seems that it is now American Airlines turn to demonstrate how badly the airlines in the United States treat their passengers and how hot headed some flight attendants can be (shouldn’t be in the business).

Female passenger with kids tried to store a stroller in the overhead compartment (some are certified to be within the limits of cabin bags) and this male flight attendant ended up grabbing it from the passenger hitting her with it in the process.

The video above doesn’t show the incident as it happened but the first class passengers seem to side with the female passenger and not the male flight attendant that appears to be on a power trip and shouldn’t be on the customer facing business.

The flight was delayed by an hour due to this incident:

I was on this flight sitting in the first row behind first class. A few rows behind where this video was shot from. Will try to best provide context to what happened from what I have seen. Proof I was on flight: http://imgur.com/a/GyyGC. It took place in multiple parts of the plane so it is hard to have the complete picture.

The Argentinian lady and her two children were in the mid to back of the plane, she was somehow able to get her stroller on board and back to near her seat. Since I was near the front, I cannot know what happened. If she tried to put the stroller in the overhead bin or what. The flight attendant told her she could not have the stroller on the plane and he needs to take it. She refused to let him take it and was to the near point of shouting. The flight attendant shouted up for security very soon on, escalating the situation more (he should have been working on deescalating)

The flight attendant and the woman started making their way to the front of the plane (I forgot who had the stroller at this point). She had her two kids. She shouted something about being an Argentinian woman and yada yada.

The video you see above, and I have a similar video (wish i recorded earlier in the situation), is the aftermath. A lot of people were upset in how he treated the woman, knocked her, and her having children around. The first class passenger as you saw went off on him and the flight attendant should have ignored him instead of getting hot headed and continue to escalate it.

In the end, the woman was removed from the plane. The flight attendant remained, served me my ginger ale. I was nice to him but you could tell he was worried for his job and could only respond with basic responses.

The woman well knows to not bring a stroller on a plane, she refused to let it go, she was shouting… so she is also at fault as well in my opinion. But don’t get me wrong, flight attendant should be way more professional than he was.

I’m surprised the first class passenger was not kicked off for his aggressive threatening of a flight attendant, but yes… flight attendant was kinda a dick and did a lot of things wrong. Let me know if you have any questions, will try to answer. 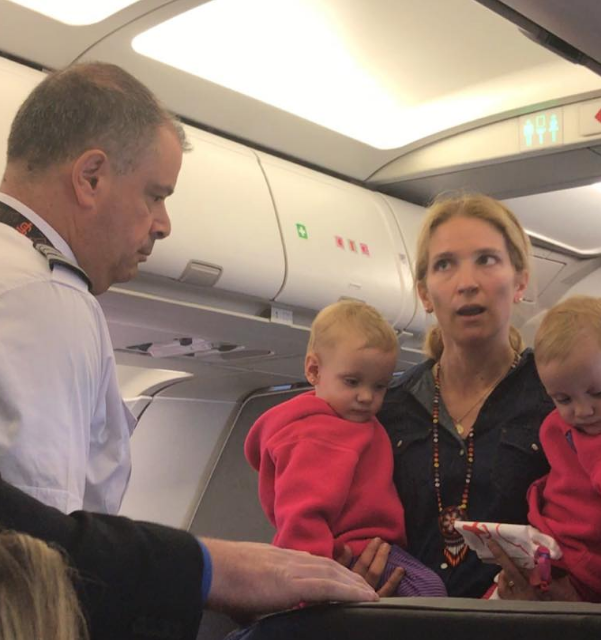 We have seen the video and have already started an investigation to obtain the facts. What we see on this video does not reflect our values or how we care for our customers. We are deeply sorry for the pain we have caused this passenger and her family and to any other customers affected by the incident. We are making sure all of her family’s needs are being met while she is in our care. After electing to take another flight, we are taking special care of her and her family and upgrading them to first class for the remainder of their international trip.

The actions of our team member captured here do not appear to reflect patience or empathy, two values necessary for customer care. In short, we are disappointed by these actions. The American team member has been removed from duty while we immediately investigate this incident.

The passenger was removed from the flight (what else did she do besides crying?) while this male flight attendant that appeared to be on a power trip was allowed to stay. Not sure why the captain didn’t boot him?

Note that I am not saying here that the Argentinian passenger was right. People working in the service industries should know how to handle customers/passengers and diffuse tricky situations.

You have to remember that the current American Airlines is really the old America West that took over US Airways first and then acquired American.