United Airlines makes headlines for the wrong reasons again after a pro golfer discovered that United had decapitated his treasured golf clubs while transporting them.

Golf Clubs are usually checked in as oversize baggage and treated carefully (one would hope) but it appears that United is now going after clubs [and rabbits] too.

The image below will break a golfers heart and I wonder how it’s possible for the clubs to arrive with such a degree of damage and I’d really be interested to know how the golf bag looked as well. 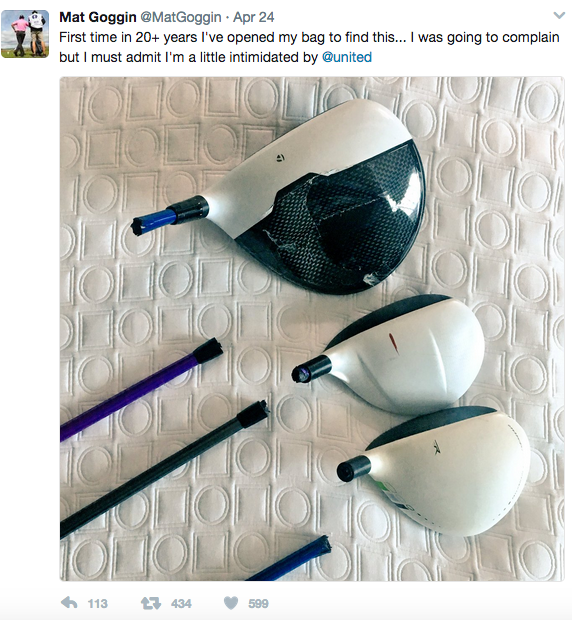 The story was featured at Golf Digest yesterday (access here) in an apparent jab at United over their widely published violent incident a few weeks ago.

Now comes this tweet by five-time Web.com Tour winner Mat Goggin, who found that after landing and retrieving his bags that his clubs had been broken.

The 42-year-old Australian didn’t stop at just tweeting out the photo though, he made sure to twist the knife with a little jab of his own.

We would advise Mat to lay low on this one. You can always get new golf clubs, what you don’t want is a concussion.

Articles like these will probably continue for quite some time and prove to be a rather long lasting damage to the United Airlines brand which many now associate with violence.

At the same time United made further headlines in yet another unrelated incident where a giant rabbit was found dead after a flight from London-Heathrow to Chicago (see NY Times article here).

All these small incidents would probably not gather much attention but after all the controversy of the past weeks the airline is now collecting the bad news like a mosquito trap and the media is just too happy distributing them.

While many are talking about lawsuits and how much the assaulted passenger will cost United I think the damage to it’s brand and permanent headlines like these will cost the company more in damage to it’s image than financial restitution to the passenger.