United Airlines has reached a settlement with Dr. David Dao, the passenger who was forcibly removed from a United flight two weeks ago to make room for United employees. 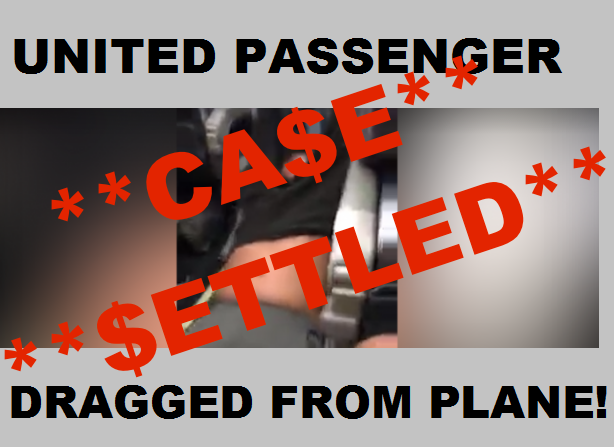 Dr. Dao sustained injuries while being removed from the aircraft by security personnel after refusing to leave on his own as he was informed that United would deny him boarding/flying involuntarily.

The whole episode made headline news worldwide for the past weeks, causing tremendous damage to United Airlines brand reputation and lead to plummeting stock prices. It might have even cost United CEO Oscar Munoz his promotion to the Chairman of the Board which was originally scheduled for next year but has now been dropped.

The New York Times reported about the settlement (access here).

David Dao, the doctor who was seen being dragged off a United Airlines jet this month in videos that sparked widespread outrage, has reached a settlement with the airline for an undisclosed amount, his lawyers said on Thursday.

The April 9 episode had stoked the fears and frustrations of airplane passengers everywhere and became a public relations nightmare for United.

On Thursday, both sides welcomed what they hoped would be the end of the ordeal.

“Mr. Munoz said he was going to do the right thing, and he has,” Thomas A. Demetrio, one of Dr. Dao’s lawyers, said of Oscar Munoz, United’s chief executive. “In addition, United has taken full responsibility for what happened on Flight 3411, without attempting to blame others, including the City of Chicago. For this acceptance of corporate accountability, United is to be applauded.”

“We are pleased to report that United and Dr. Dao have reached an amicable resolution of the unfortunate incident that occurred aboard flight 3411,” he said in an email. “We look forward to implementing the improvements we have announced, which will put our customers at the center of everything we do.”

The fact that Dr. Dao’s attorney is actually praising Mr. Munoz in his statement despite the rather rocky response from United Airlines following the incident hints at a rather generous settlement which serves both United and Dr. Dao alike.

Whatever the amount is he could have probably gotten more in court but this way he’ll have his money next week and United can put this matter to rest sooner rather than later without more dirty laundry out in public.

Yes at one point the story would have worn off and people get sick about hearing about the same old news but at the same time an ongoing litigation with constant updated undermines United’s commercial and especially advertising efforts. Paying Dr. Dao off and moving on is the right and economical thing to do.

At the same time United is implementing changes in it’s corporate structure and customer service commitments including plans to reduce how many flights it overbooks, compensation for lost baggage and tying executive compensation to customer satisfaction.