One of the highlights of my visit to North Korea was a one-hour helicopter tour over Pyongyang. Offered as an add-on to the tour and operated by Air Koryo under flight number JS 8101, we had the chance to fly over the city in a Mil MI-17, a medium twin-turbine Russian transport helicopter.

In case you missed them, you can catch up on my reviews of Air Koryo flight JS 222 PEK-FNJ (here), and the Yanggakdo International Hotel (here).

The helicopter tour was offered as one of the possible extra activities we could add to the main tour (other extra activity offers included having dog soup or going to the circus). The activity had a limited capacity, as the MI-17 could only seat 15 passengers. According to the airport information screens, there were 4 helicopter flights scheduled for that day.

The staff from Korean International Travel Company (the state-owned receptive tour operator) took us apart from the main group around 9.30 AM to take us to the airport. When we got to the domestic departures area we were greeted by an Air Koryo representative who handed us our boarding passes.

As we were booked on the first tour departing the airport, we were taken through security and to a gate waiting area that had some seating space and a small snacks/souvenirs shop where you could purchase typical North Korean snacks such as Pringles, Choco Krispies or Lindt/Milka chocolate. 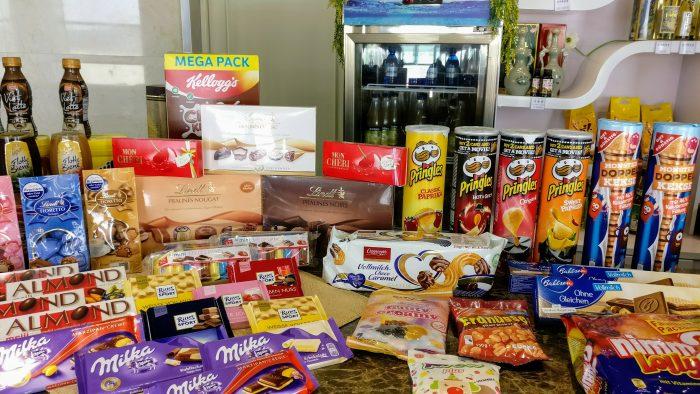 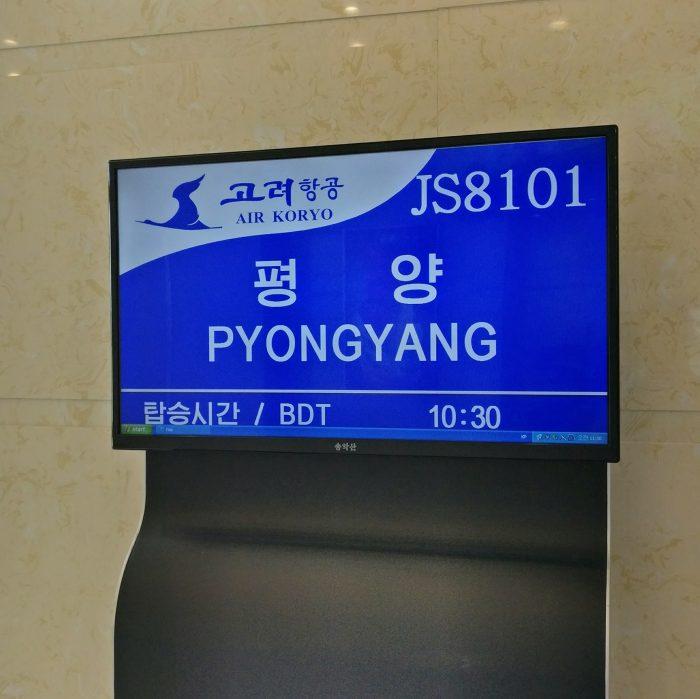 We got a bus gate. The same Air Koryo representative that handed us our boarding passes was scanning them at the gate. A low-floor bus took us to the tarmac where we finally saw the MI-17. Up to then I had this idea in my mind that we were going to be toured on a military aircraft, but that was not the case. The helicopter in front of us was a white civilian transport chopper with no military capabilities. 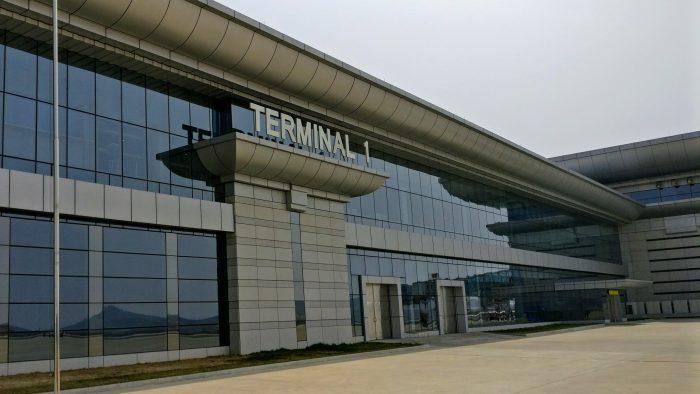 In the tarmac, we could also see from afar Air Koryo’s only Ilyushin Il-62M (Russian long haul, narrow body passenger jet) parked next to their three Ilyushin Il-76 (cargo freighters). Air Koryo used the Il-62M between Pyongyang and several European cities, before the European Commission banned almost all their entire fleet from navigating the European airspace.

The interior of the helicopter cabin was a surprise: hard wood floors, a wooden table with two rotating chairs and lateral benches. It resembled of a fancy private train cabin. The same Air Koryo representative that handed and scanned the boarding passes walked into the cabin and gave us bottled water, she was also going to be our Flight Attendant (talk about multitasking!). 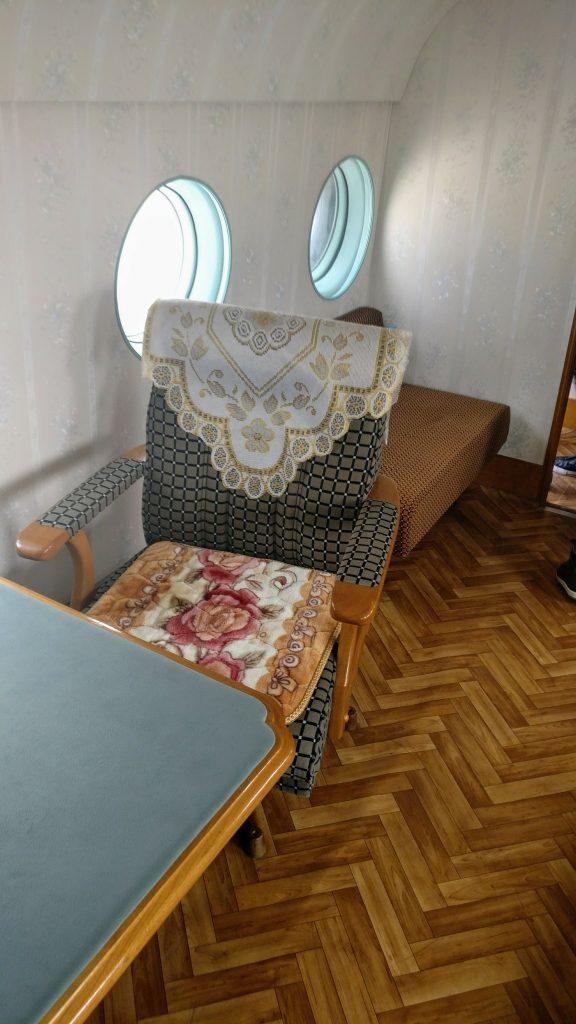 The take off in that chopper was sweet. It was not as noisy as I remember from previous helicopter experiences, making me think the cabin was soundproof. 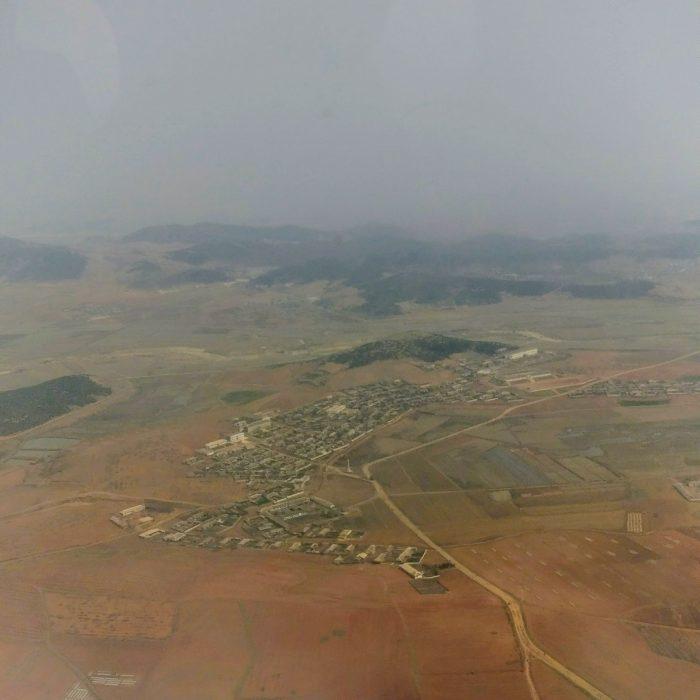 Pyongyang is a strange place. The city that you are shown from the ground is a city of wide avenues and high-rise buildings, all made to show off. Like a movie set, we were always paraded through the camera ready parts of the city.

From above we could see a face of Pyongyang that was not shown to us from the ground. The high rises are concentrated around the avenues and the river, but the rest of the city (of about 3 million people) is full of much more modest constructions, small houses and dirt roads. Not everybody is as equal in a communist regime after all. 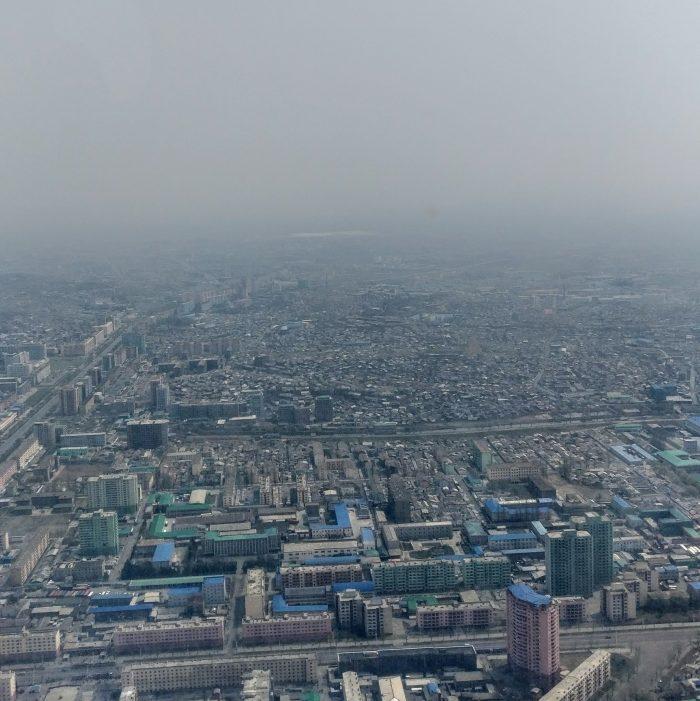 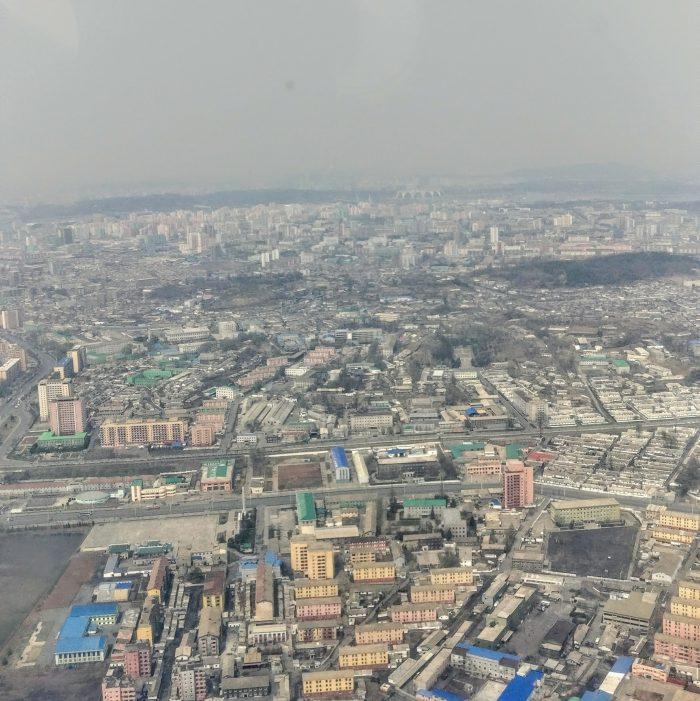 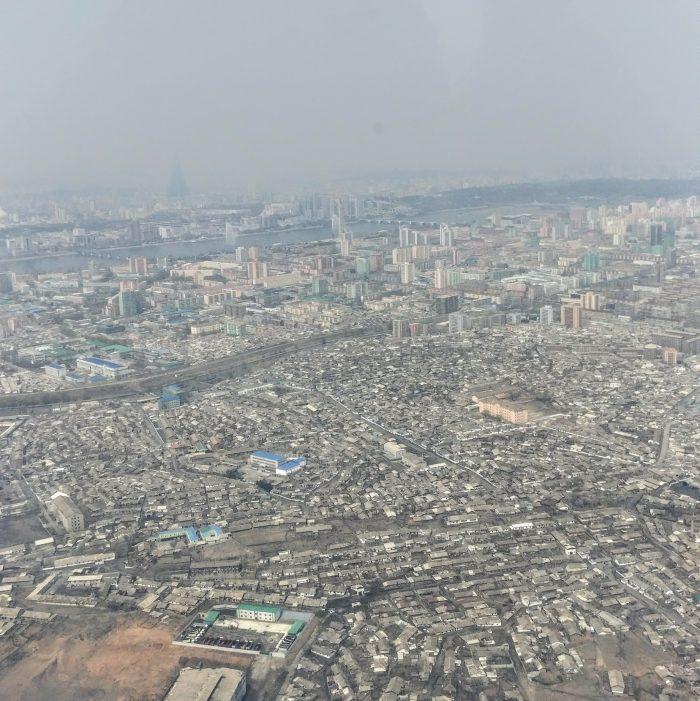 The pilot made sure to take us quickly to the good side of town so we could take a look of the high-rises and the empty avenues. 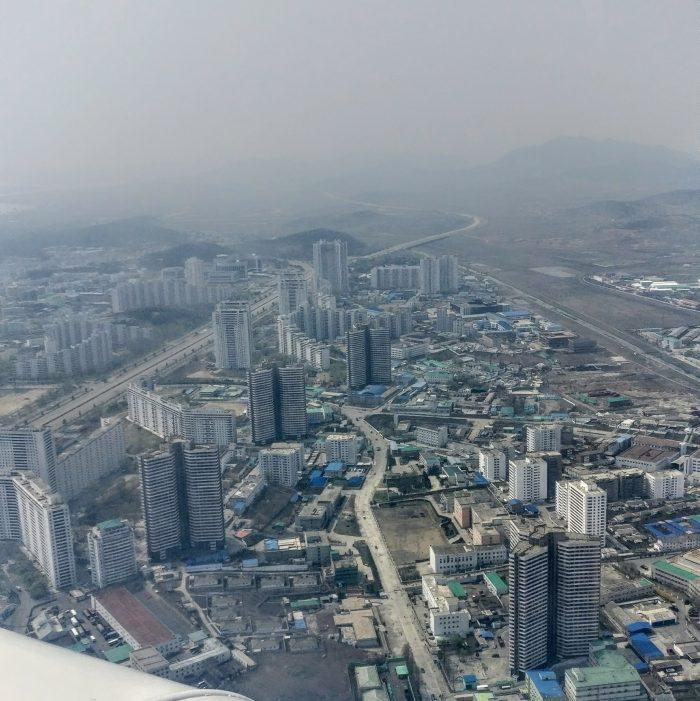 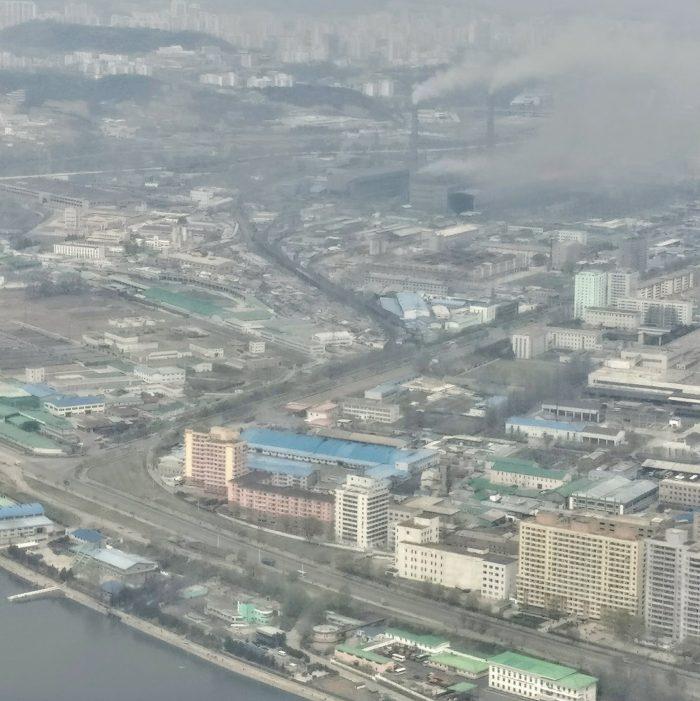 Carbon power plant in the middle of the city 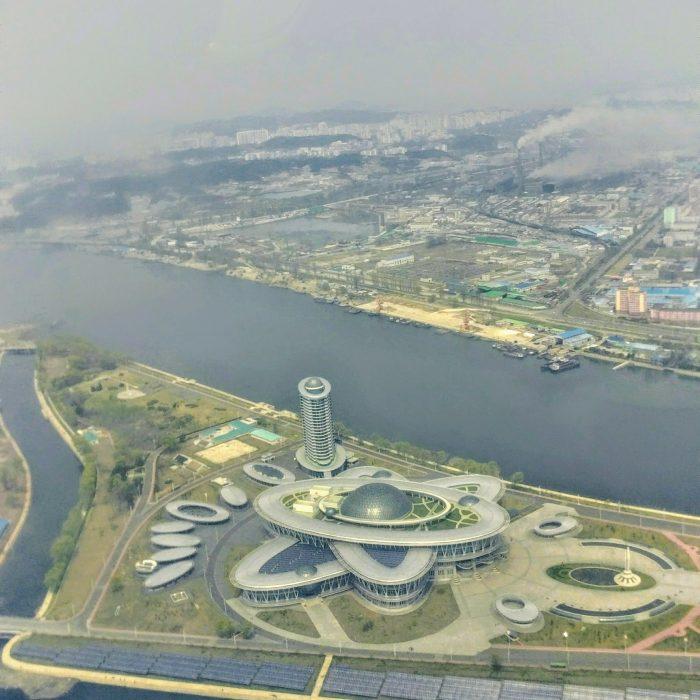 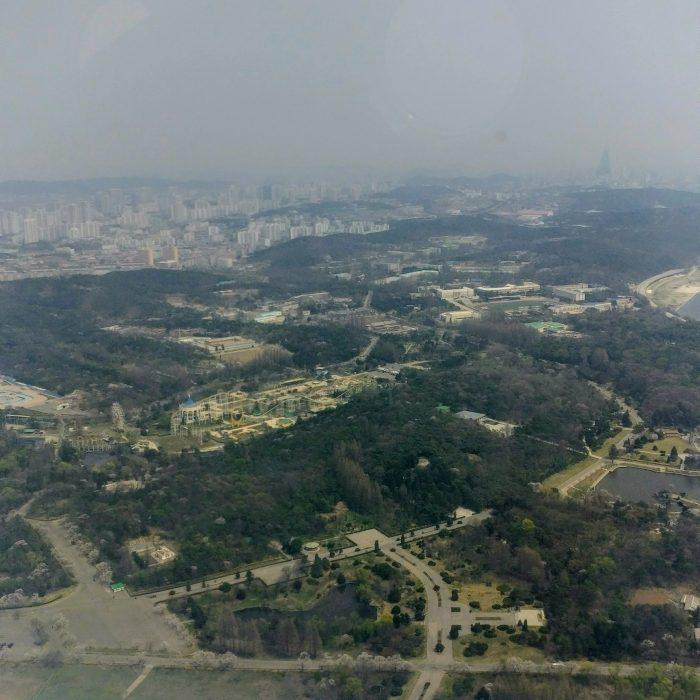 At our return, we exited through the empty domestic luggage hall to the terminal. The terminal was empty, except for a few locals that were visiting and taking pictures. 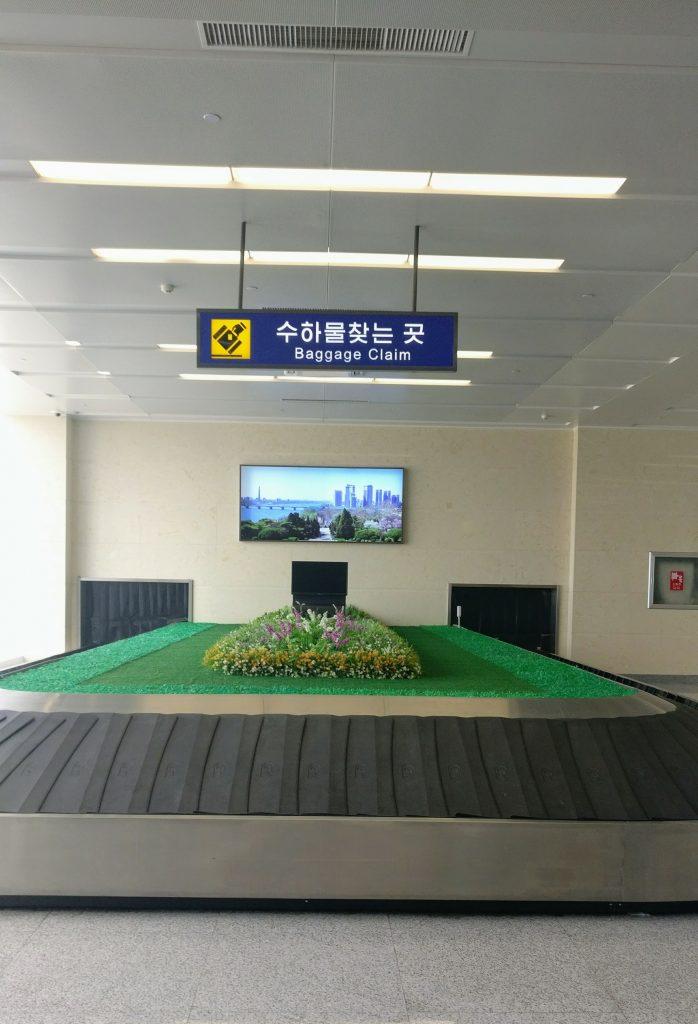 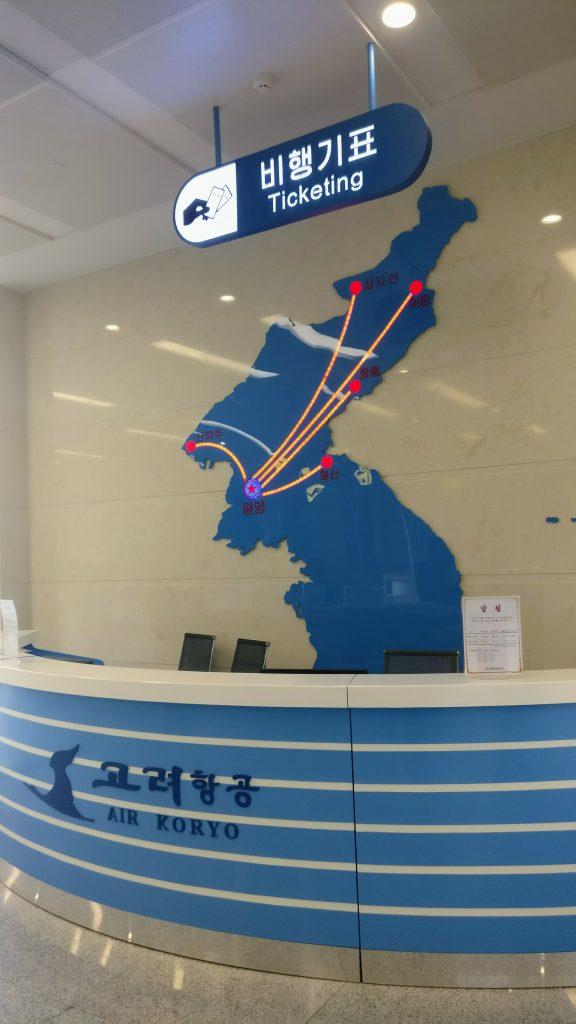 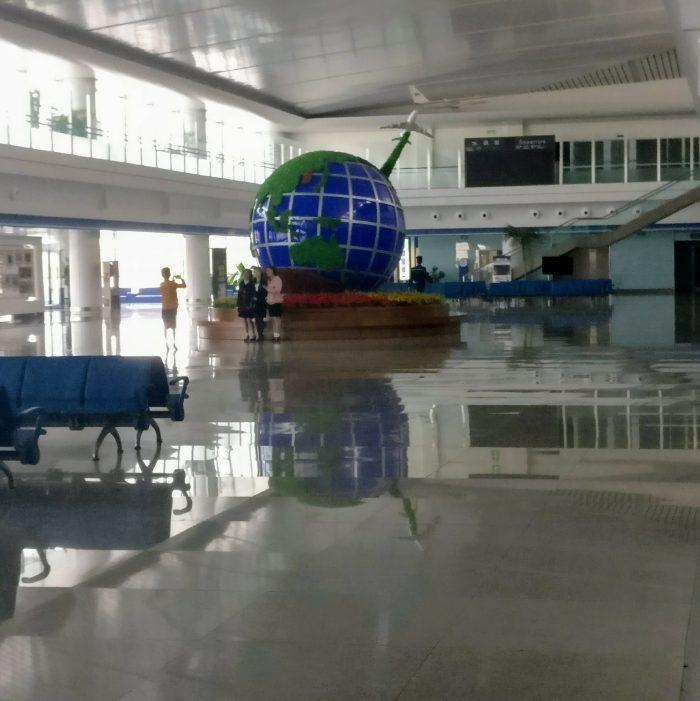 The restaurant is small, 6 or 7 tables, and is operated by Air Koryo. The staff wears the full flight attendant uniform and the food is delivered to your table in cabin-appropriate food carts.

The lunch was copious. It started with pork medallions and gravy, followed by a pizza slice. The pizza had shrimps, peppers, olives, and a full slice of ham, which made an odd combination for pizza toppings. When everybody thought lunch was over, they brought a steamed rainbow trout, which I passed on as I was kind of full after two full dishes. My intentions got lost in translation, and the staff thought I didn’t want to have fish, so they brought me a steak, which was followed by Beef Stroganoff and ice cream for dessert. 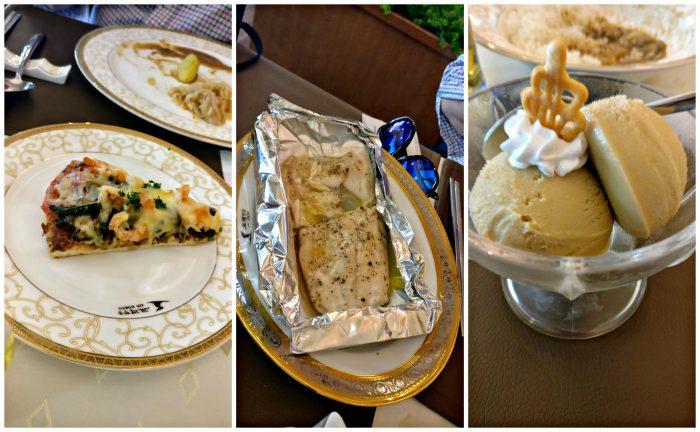 Being as tremendously image conscious as the Pyongyang regime is, it was surprising that they would allow this aerial tour, knowing that flying over the not so pretty areas of the city was inevitable.

Lunch was too much food by any standards, and it felt so out of touch with a country that has experienced periods of rationing and hunger in the past. Something like The Capitol in The Hunger Games.

As I posted a week ago, I ended up spending six months of 2020 in Japan and decided to repatriate... 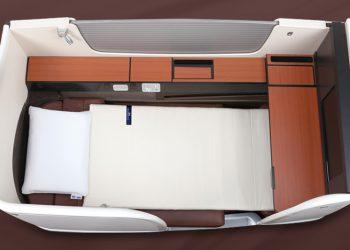 A few days ago, I wrote about my impressions of Japan Airlines first class lounge at Tokyo Haneda airport. Now,...