An Aeroflot flight from Moscow to Bangkok hit heavy turbulence about 40 minutes prior to landing and as a result 27 Passengers (mostly those without seat belts on) were injured including broken bones. 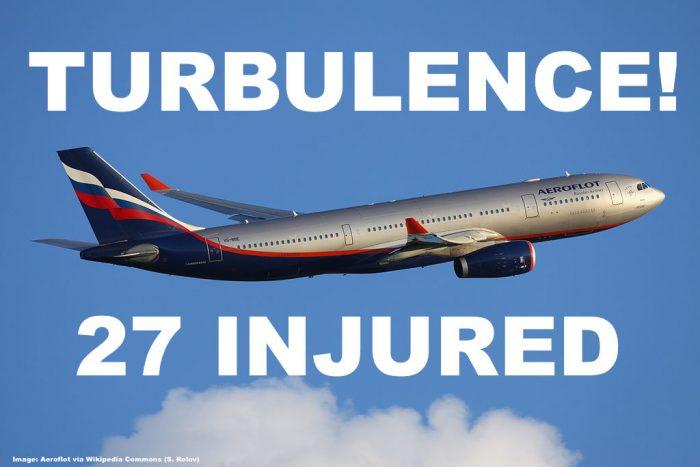 The injured required medical attention and paramedics were standing by right after landing.

Injuries of passengers resulting from turbulence are often the result of not using the seat belt as required when the pilots switch on the fasten seat belt sign or from items being catapulted through the cabin.

Some more information is available in this article from The Guardian.

Severe turbulence has injured 27 people on an Aeroflot flight from Moscow to Bangkok, with passengers thrown into the aircraft’s ceiling, leaving some with broken bones.

The Boeing 777 hit a pocket of “clear air” turbulence – where there is no telltale cloud pattern or radar presence to warn pilots of the change in air pressure – as the flight prepared to land in Bangkok, shortly after midnight on Monday.

“Fifteen Russians and two Thais are still in hospital,” he told AFP, adding the rest had been discharged.

Aeroflot said none of the passengers were in a serious condition, and although several had broken bones, none had suffered spinal compression fractures, as had been reported earlier on Monday.

The turbulence hit about 40 minutes before the aircraft was due to land, and was “impossible to foresee”, with the crew unable to warn passengers to return to their seats and buckle their seatbelts, Aeroflot said. The flight was operated by an experienced crew, it added, including a pilot who had logged more than 23,000 flight hours. …

If such a situation occurs suddenly without any chance for prior warning it emphasizes even more that the seat belt should be worn at all times, even without specific announcement.

The following video was uploaded to Youtube showing scenes from the flight:

Whatever happened on this flight it was serious and passengers should really follow the advise of the airline to wear the seat belt at all time while in flight, even if the captain did not switch on the seat belt sign. Chances are many injuries could have been prevented if passengers were properly strapped down. At least for those not frequenting the washroom at the time.