All Nippon Airways (ANA) is usually known for it’s nice catering and friendly flight attendants but what one customer just received as Gluten Free Special Meal is less than underwhelming: A single banana! 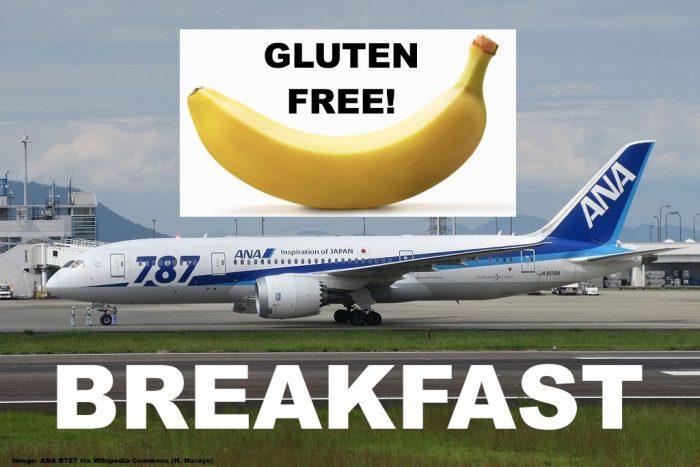 Special Meal can indeed be “special” and at times very bland depending on what airline you fly but a single piece of fruit including the obligatory sticker from the catering department is something else.

While some news reports blasted ANA for this being the only choice the passenger had during that flight let’s say right off the bat that this isn’t the case as the “Banana Meal” was for breakfast only.

The EveningStandard (access here) had a nice story on it including photographs of the “meal”.

Londoner Martin Pavelka claimed he was handed the piece of fruit, along with a knife and fork, on an All Nippon Airways (ANA) flight from Toyko to Sydney.

The 32-year-old coeliac sufferer, who had been given an evening meal at the start of his flight, told the Standard he was left “speechless” when the snack arrived for breakfast.

He said: “All other passengers were served full breakfast meal consisting of eggs, sausage, mushrooms, bread, and yogurt.

“This was a nine-hour flight. Although definitely gluten free, the banana did not keep me full for very long.” …

The airline has since apologised to Mr Pavelka and says it will review how its gluten free options are served.

However, ANA claimed on Thursday that every other passenger had also only been given a snack for breakfast rather than a full meal.

A snack might very well be but one piece of fruit on ANA… I find that hard to believe and I have flown on ANA routes of similar duration before.

You gotta give them points for the attention to detail and even deliver it with the original sticker though. 🙂

I don’t believe this is the normal way that ANA serves their Gluten Free Breakfast “Snacks” and that someone at the catering department has messed up. As I mentioned I had personal experience with such snacks and usually they are more attractive than this.

At least ANA acknowledged their mistake and will review the incident and catering options.