Alitalia, the troubled Italian airline that filed for bankruptcy this week for the umpteenth time, appears to have “challenges” processing credit card refunds (at least in the US).

I had purchased two Alitalia issued tickets on Expedia late December and one of them was refunded within 24 hours of purchase. The second one in sometime February.

As these were purchased through OTA, you must refund through them. The refund option for the second ticket wasn’t working on the website (Expedia) and I had to do few rounds of emails with their Expedia+ Gold support. At the end, they were not able to process the refund and the only option for me was to contact Alitalia.

So, I rung their number in the States (March 1st) and got hold someone that processed refunds for both tickets and sent me the confirmation emails that the refunds had been issued.

Based on the office code on the refund emails, it seems that Alitalia’s US call center would be based in Oxnard (California). I believe that I have landed or flown from that airport once. I could swear that United was serving it onetime.

Anyway, I waited two months and no refund had been posted to the credit card that I had used to pay for this. In the meantime, the airline was in the brink of collapse (it has since filed for bankruptcy) and I decided to file DOT complaint. The tickets were issued by Expedia in the United States.

After I had filed the DOT complaint, I received message couple of days later that they had informed Alitalia and decided to include Expedia too (I had only filed this against Alitalia:

The part that was sent to both Alitalia & Expedia:

Included both the refund receipts: 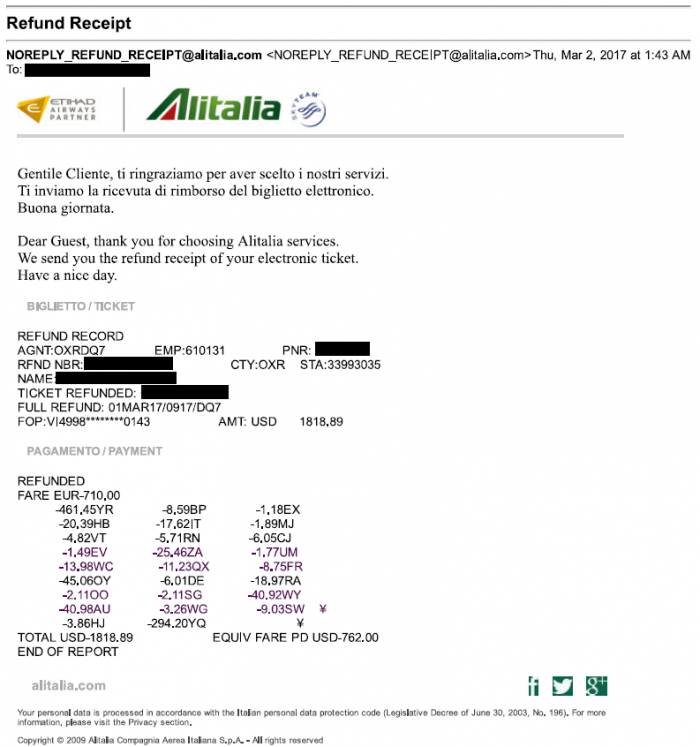 Few days later I received an email from Alitalia:

It never ceases to amaze me how difficult it is for some travel providers to refund the money back to the credit card used and how often there are “glitches” along the way. I don’t think that there has ever been even a single glitch charging me, however.

Not sure if Alitalia’s credit card processor in the United States is holding processing credits due to exposure to the airlines bankruptcy?

I could have done a chargeback as well but it would have required me to send a certified letter to Germany (had used German issued credit card to pay for this).

Let’s see if this refund surfaces in the next 12 days and my “monies” are returned. It would have been Expedia’s responsibility as an agent to deal with this refund mess.