Delta SkyMiles had a few issues this weekend, notifying members that they were upgraded to Diamond Medallion status for no apparent reason which caused quite a stir in the frequent flier community. 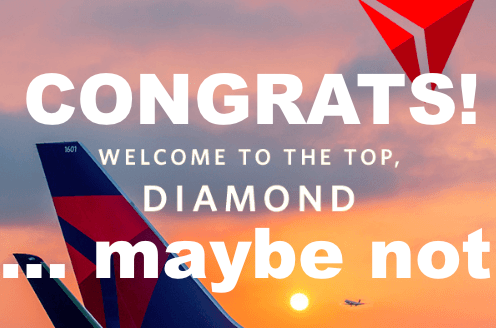 After blowing up Delta’s Twitter account and SkyMiles realized something isn’t right the company was working to get accounts back to normal and customers reported that their balances and status changed.

Starting Sunday morning we got a few messages from readers who were also affected by this bug and received the joyous email from Delta about their new status.

I tend to be careful and take such good news with a grain of salt because if something sounds too good to be true it usually is – as it turned out to be in this case.

Not only did Delta upgrade the accounts of some members but it added various chunks of elite status qualifying  miles (EQM) to the accounts.

There was also a significant discussion on this Flyertalk thread where FT members posted their current account status and parameters to figure out why they were targeted.

Here is a post from FT member Zorak who summed it up well:

This is indicative for the confusion that lasted for roughly a day until Delta started to correct these upgrades and EQM entries.

While processing this correction Delta screwed up even more and changed peoples EQM/Million Miler balances which required additional time to fix. I don’t want to imagine the phone calls they received (probably not that many though since only a limited amount of people were affected by this).

Members were also prompted to select choice benefits which include upgrades and gift cards. These still show up in the accounts of those who picked them. Opinions differ what Delta can do if people just use them.

I think using the choice benefits could have negative results such as the passenger being downgraded in the very last minute and finding himself in a middle seat.

In any case Delta seems to have serious issues with their IT and this just months after several meltdowns causing huge delays for passengers nationwide.