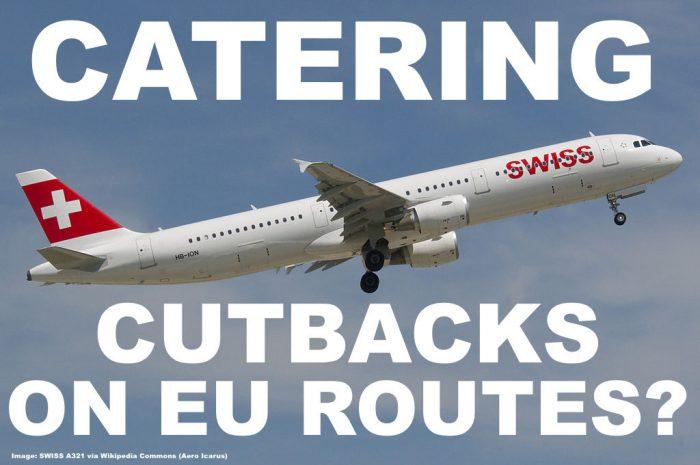 According to industry insiders, first experiments are scheduled to be set out on routes ex Geneva – a Swiss hub that has been unprofitable for quite some time.

It’s no secret that the Lufthansa Group has been on a course to cut costs across the board and especially with the help of their budget carrier Eurowings which has been deployed to many routes previously operated by mainline flights. Much to the dismay of passengers!

The Swiss Tagesanzeiger (access here – in German) just published a story citing unnamed sources that SWISS is about to run trials of European flights without catering on their Geneva routes.

The article mentions that a team is currently working on various scenarios for these routes reaching from serving a simple pretzel with water up to completely eliminating complimentary food and beverage options from the relevant flights (similar to British Airways current modus operandi).

SWISS is competing against budget carrier Easyjet which dominates 40% of the market in Geneva and has eaten away on the national carriers earnings at a destination which is home to the United Nations and has been a cash cow in the past.

In the past couple of years Geneva generated a loss of approximately 30 Million Swiss Francs annually for SWISS and that’s not to the liking of Lufthansa. They could start serving GVA entirely with Eurowings if the Swiss carrier isn’t able to turn things around.

Budget carriers have put a lot of pressure on the legacy carriers all over Europe and all the Lufthansa Group airlines are feeling the thumbs of Easyjet, Ryanair, Norwegian etc. SWISS is traditionally profitable and less of a problem for Lufthansa but of course being 30 Million in the red doesn’t help things to get better.

It’ll be interesting to see if SWISS has the stomach to actually eliminate the entire F&B in the way British Airways did. Personally I find the service on SWISS already quite reserved in all classes of service. Even worse than on Lufthansa itself.

Airfare of the Day [Business Class] STAR ALLIANCE Los Angeles to Dublin from $1,785