The Democratic People’s Republic of Korea (the official name of the Hermit Kingdom, and the name the locals insist you use) is one of the most secluded countries of the world. The information we get outside its borders is either regime-approved content or the analysis/speculation of several intelligence agencies that is leaked to the press.

I had the opportunity to visit the country during the celebration of the 105th anniversary of Kim Il Sung, their supreme leader and founder of the republic. Even with the limited access you get as a tourist, we were able to experience first-hand many things the news usually do not explain.

A small recap on this trip: it all started when I decided to change a wine tasting week in Tuscany for a weekend in Pyongyang. Then there was my Air Koryo flight. And then the Yanggakdo Hotel, what a peculiar place. And of course, there was the helicopter tour review. Now let us focus on what happened during the rest of my trip.

There were several groups of tourists attending the anniversary celebration that weekend, divided in smaller subgroups. My tour group consisted of 17 people + 5 tour guides (3 local guides + 2 guides from the travel agency) + 1 bus driver, roughly 1 staff member per each 3 visitors. We were closely monitored at all times.

On arrival day, due to delays @ PEK (1 runway was closed for maintenance) we arrived to FNJ at 9 PM (instead of 5 PM as originally scheduled). This delay played in our favor: the airport staff was willing to go home, so we were not subject of extensive searches through our belongings or electronic devices. The only thing they seemed to care about was books: customs officials collected them all and reviewed one by one before approving their entry. From the airport we were taken directly to the hotel, and we were given instructions for the following morning.

One thing that freaked me out at hotel check in was that the local guides collected our passports as soon as we got to the hotel. The passports remained in their custody for the length of the trip and only were returned back to us at the airport on departure day.

The first day of the tour started with an early call. We were going to be taken to the demilitarized zone (DMZ) and it meant a 2.5-hour drive to the South Korea’s border.

Leaving Pyongyang by one of its huge, empty avenues, we could see gigantic residential complexes of several high-rise buildings on both sides of the avenue. From afar, you could not help but notice their bright colors, but when you looked in detail, you could see the paint peeling, uneven windows and darkness inside the apartments, almost as if nobody lived there. 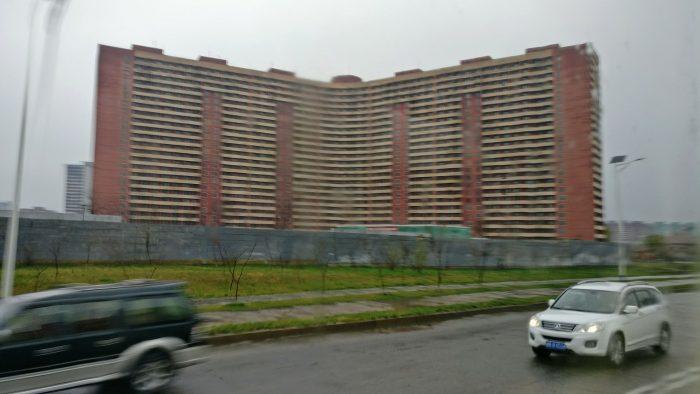 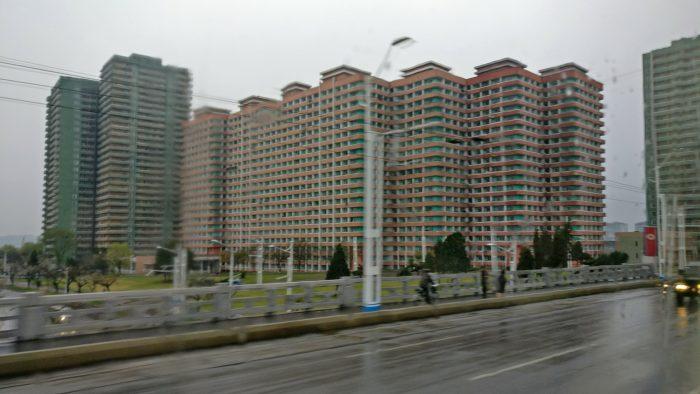 Traffic at that time in the morning was mostly people walking or bicycle. The regular people don’t have access to cars, and public transport options (metro, buses and trolleys) were limited to the most central areas of the city.

Once you make it out of the city, the colorful buildings turn into a darker palette. Along the road there were no mayor towns, just small villages here and there close to the farms. 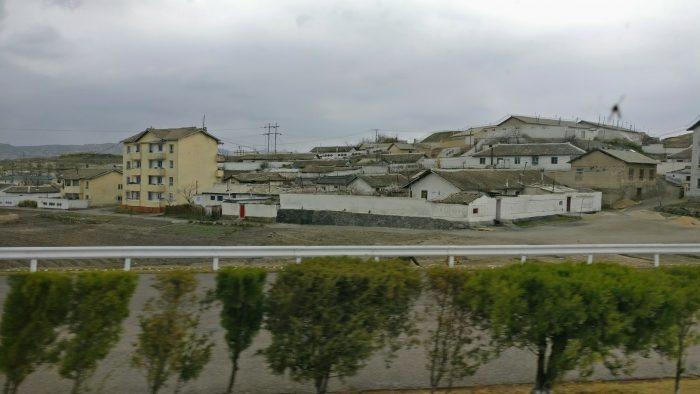 The traffic to the DMZ consisted basically of tour buses. There were several military checkpoints on the way, where we were asked to hide our cameras and to not taking pictures of any military personnel as it could get us in trouble. There was a rest stop half way to the DMZ with some souvenirs and literature selling, and a snacks table, mostly Malaysian products (including a fake Coca-Cola and fake Pringles), but also Heineken beer, which by the way it’s widely available throughout the country.

After some three hours of driving, we got to the visitor center on the North Korea’s side of the DMZ. Two big propaganda murals and a shrine for the great leaders was the only exterior decoration of the post.

The visitor center consisted of a souvenir shop (of course) where you could get hand-painted propaganda posters (they were so retro they were kind of cool) besides all the other typical souvenirs you can imagine. Next to the souvenir shop is a waiting room with a map of a unified Korea and a plan of the DMZ. 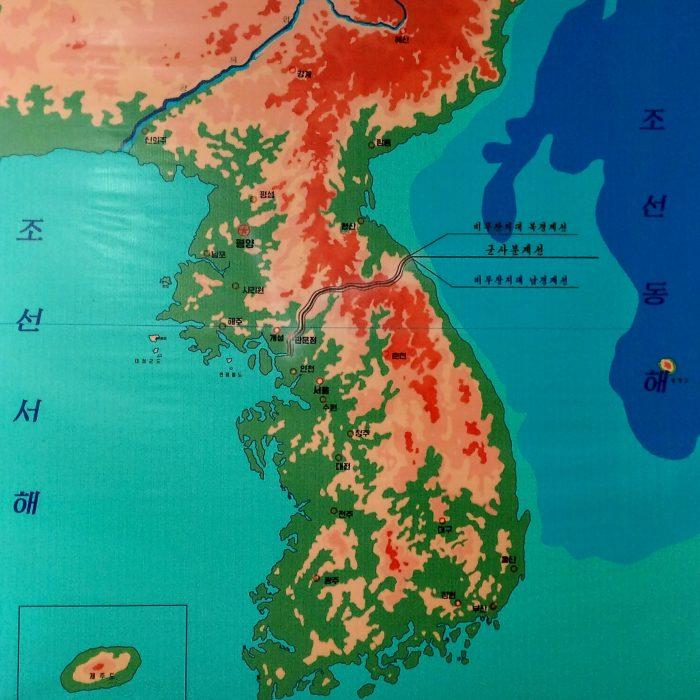 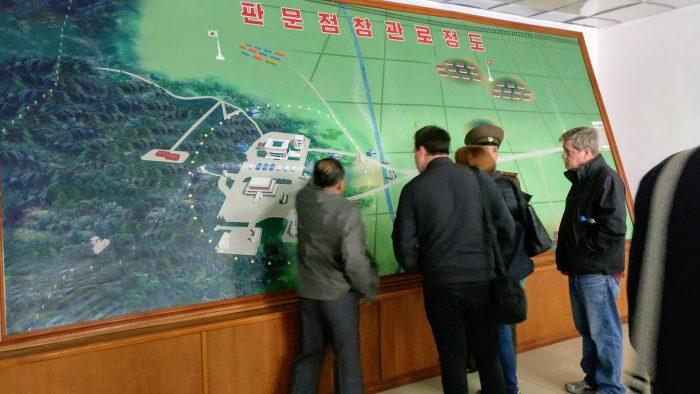 An officer of the North Korean Army was in charge of our visit to the DMZ. In Korean (with a translator), he explained in every step of the visit, the vision of the North side on all the events that took place in that region. Learnt by heart.

From the visitors center we were taken to the building where the negotiations for the Korean Armistice Agreement took place, and to the Peace Museum, mostly propaganda on the armistice including the exhibition of the copies of the signed agreement.

Negotiation table for the Armistice talks 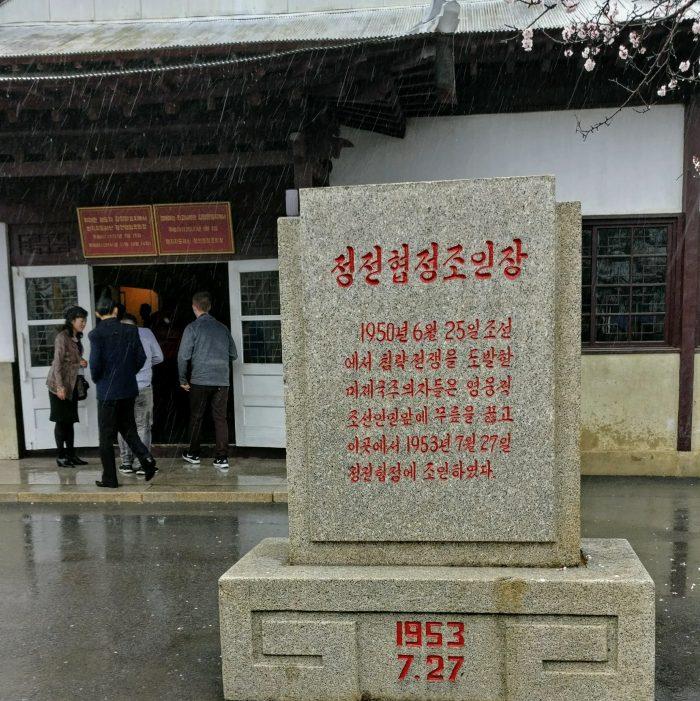 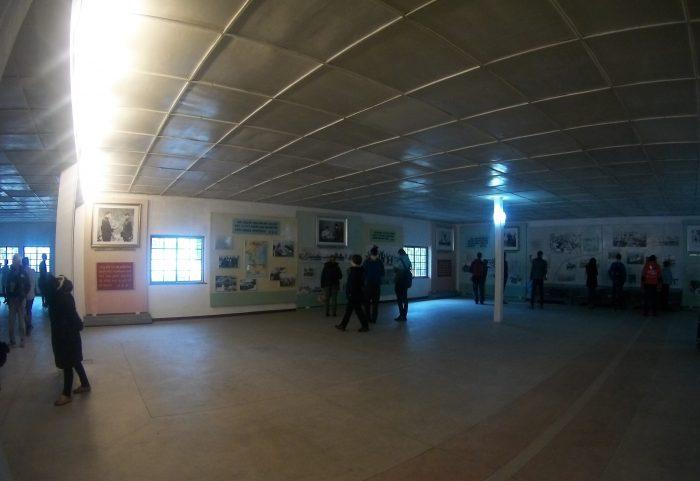 USS Pueblo apology letter from the US government

Next stop was the Joint Security Area. The infamous three blue houses that get air time every time there is the communication of an infraction of the terms of the armistice by any of the contenders. They took us to Panmungak, the main building on the North Korean’s side, from where we had a clear view of the border and the Freedom Hall on the South Korean, where the UN headquarters are located. It was interesting to see the amount of CCTV cameras on both sides monitoring every inch of the space. 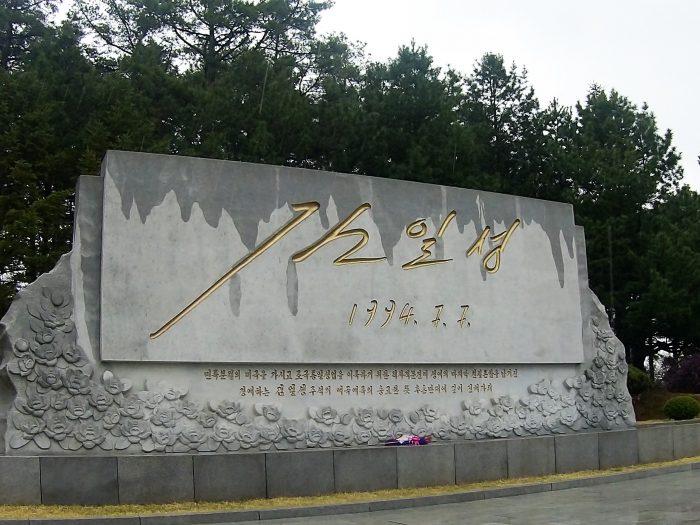 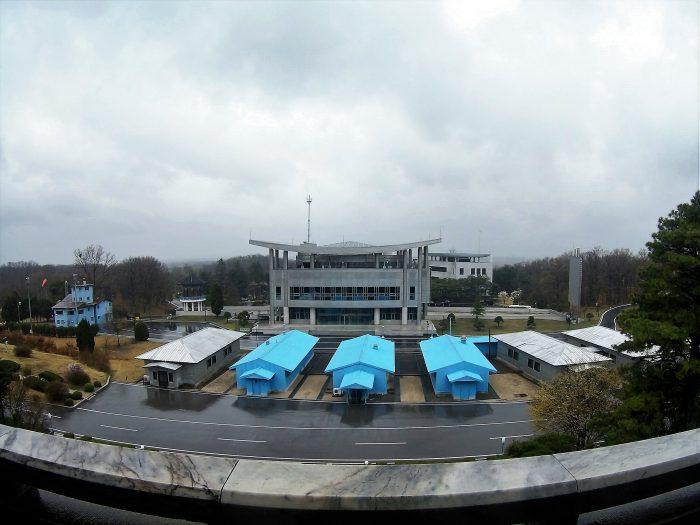 The border and Freedom Hall on South Korea’s side 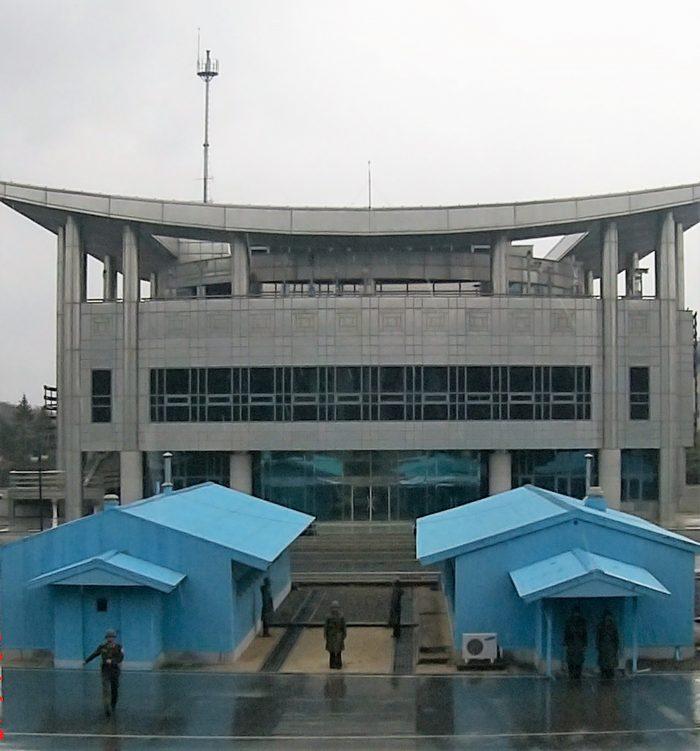 Once we were done visiting the DMZ, we were taken to Kaesong, North Korea’s 2nd most populated city (around 350000 inhabitants), for lunch. We were served an 11-courses lunch with soup, rice and rice wine. 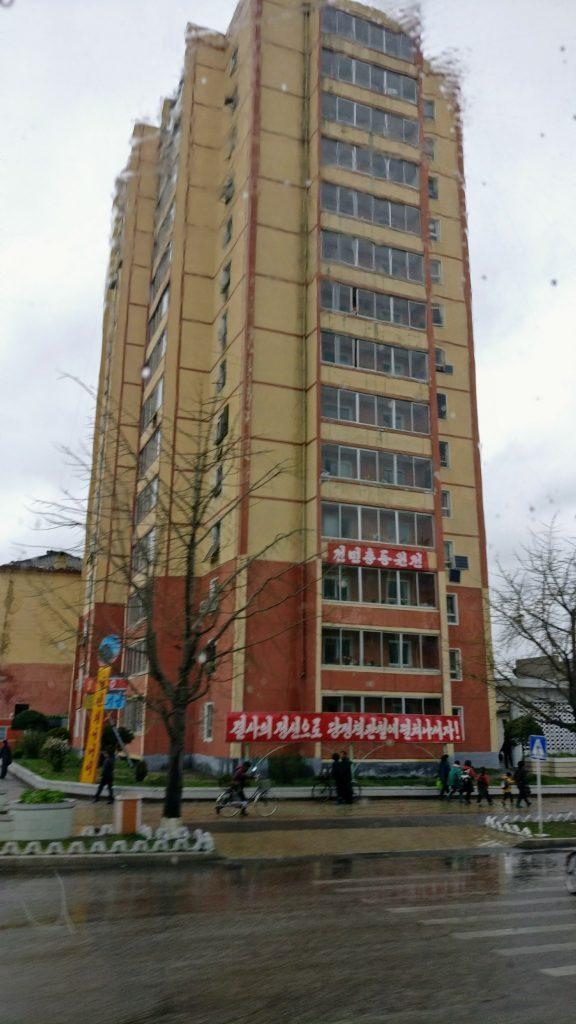 After lunch we visited Koryo Songgyungwan University and Koryo Museum, on a Unesco World Herritage site. The university was founded in 992 as a Confucian academy. 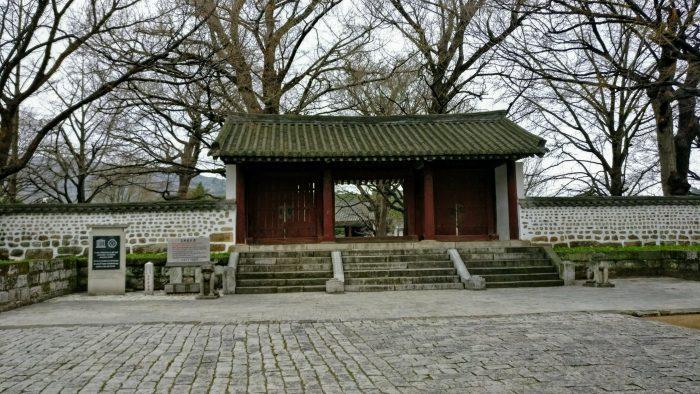 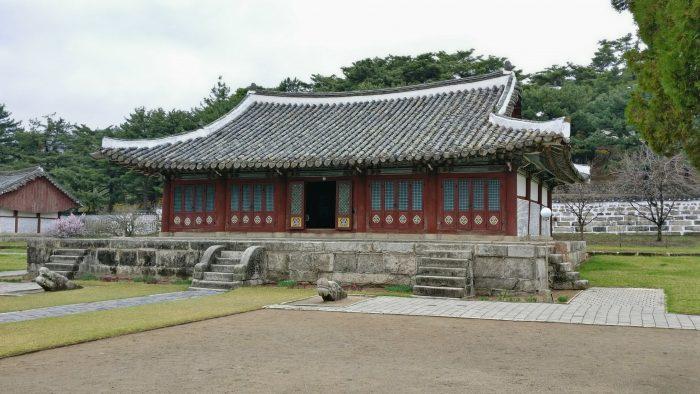 On our return to Pyongyang we stopped at the Arch of Reunification, an allegory to the reunion of the two Koreas, two ladies in the traditional dress.

I thought I was going to be able to sum all my weekend in Pyongyang in one post, but it seems mission impossible: too many things to be shared!

North Korea is a strange place. If I had to define it in one word, I would say it is bipolar. It is a country full of contradictions. It is fascinating but also scary. It is just as I imagined it, but so different at the same time.

The visit to the DMZ by itself was quite an experience. The tens-but-calmed environment you sense at the Joint Security Area is something I cannot describe. The North Korean side of the DMZ is part of the propaganda machine of the regime and they take advantage of it to expose visitors to their side of the story. Right or wrong, everything is discussible. However, it was interesting to see their take on history, different from the one that we have been provided.