I had the opportunity to visit North Korea during the celebration of the 105th anniversary of Kim Il Sung, their supreme leader and founder of the republic. Even with the limited access you get as a tourist, we were able to experience first-hand many things the news usually do not explain.

As I have mentioned before, Pyongyang is a city of contrasts. It has 3 million people but you barely see people on the streets. It has this movie set feeling, most things are camera ready but they are just a façade.

In case you missed it, you can access the first part of this review here.

As a part of the tour, we visited Pyongyang’s most emblematic sites. This included visiting the Subway, the Circus, the Liberation War Museum, and emblematic squares and monuments.

Right after returning from the DMZ, we visited Pyongyang Metro. One of the things that makes this visit so peculiar is that Pyongyang Metro is among the deepest metros in the world, with the track at over 110 meters (360 ft) deep underground. Due to the depth of the metro, its stations can double as bomb shelters. It takes about two and a half minutes from the ground to the platform by escalator! 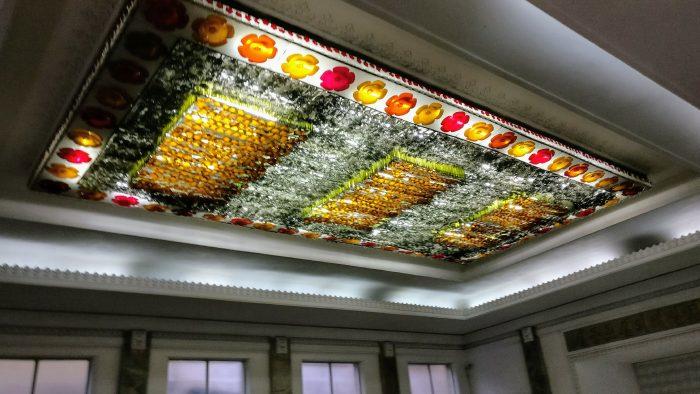 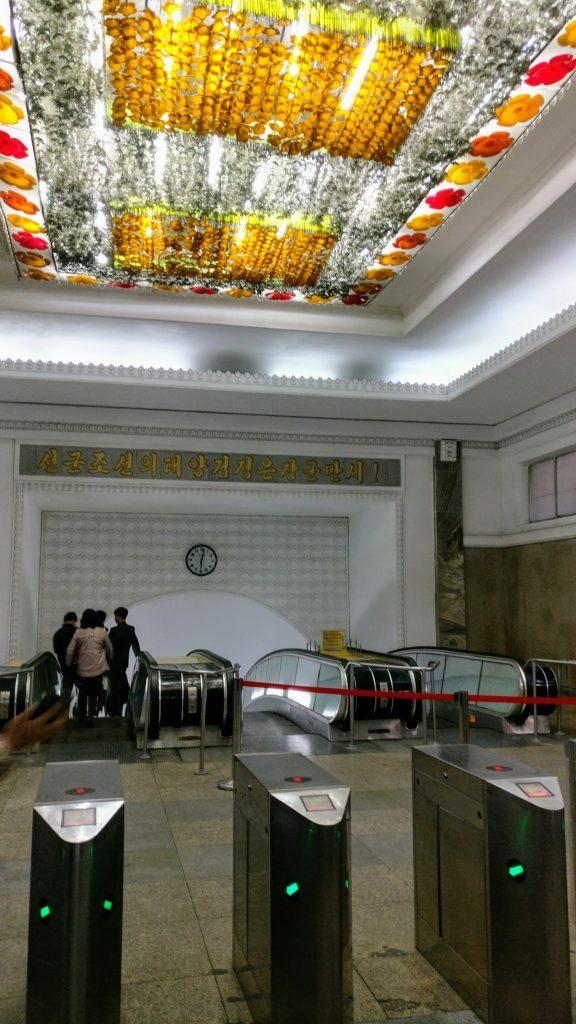 As part of the tour, we visited two stations and we rode the Metro for six stops in an old West Berlin rolling stock. The stations we visited were profusely decorated, while the other stations we stopped at during our ride were not decorated at all. Asyou could expect, there were images and references to their great leaders (Kim Il Sung and Kim Jong Il) everywhere, but no images of the new guy anywhere. 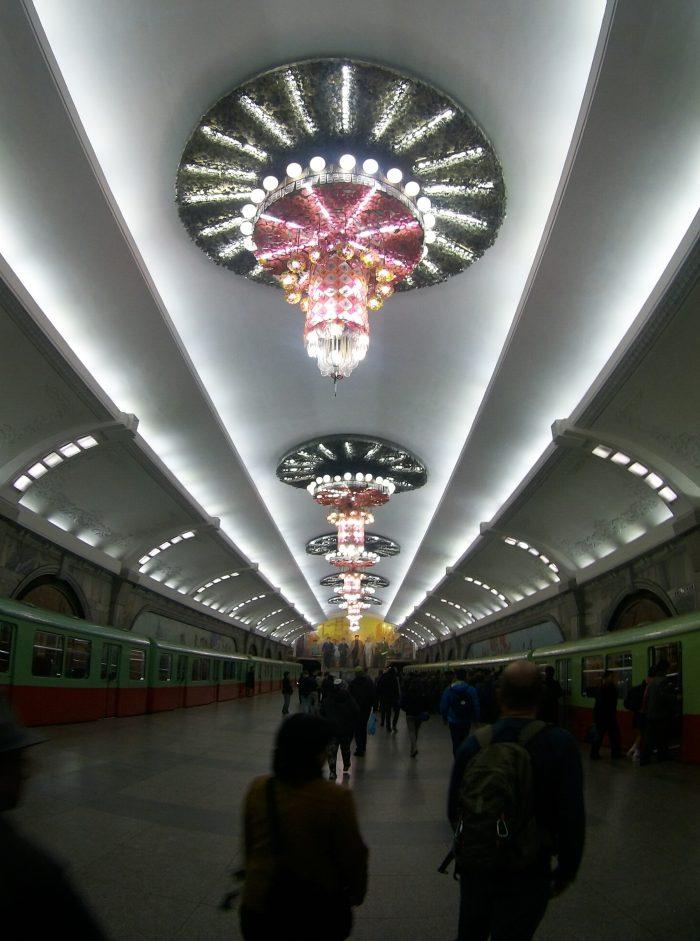 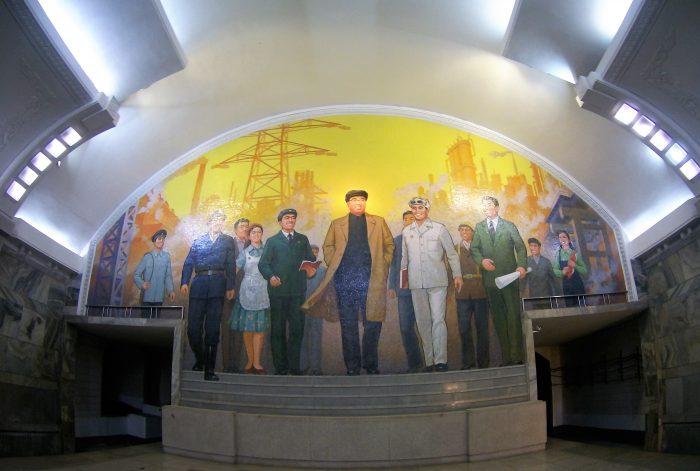 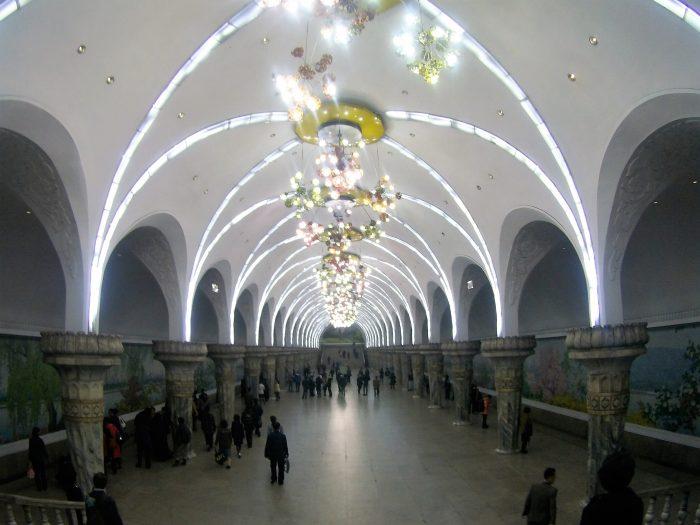 Both Metro stations we were allowed to visit had the official newspaper on display so the commuters could read it while waiting for their train. This is one of the three ways the residents get their news, being the other two the state controled TV and radio stations. 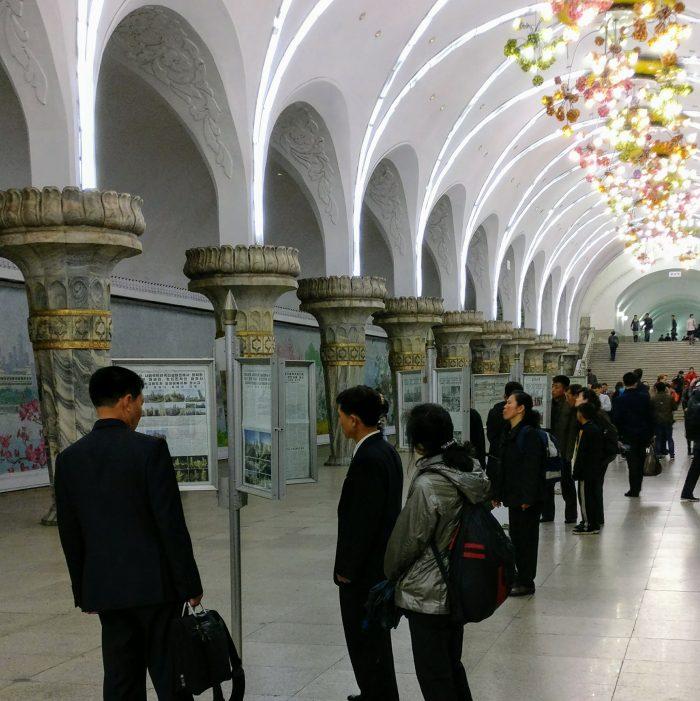 As I mentioned before, our Metro ride took place on an old West Berlin rolling stock!

We exited the Metro at Kaesŏn station. The only decoration consisted of a golden statue of Kim Jong Il. 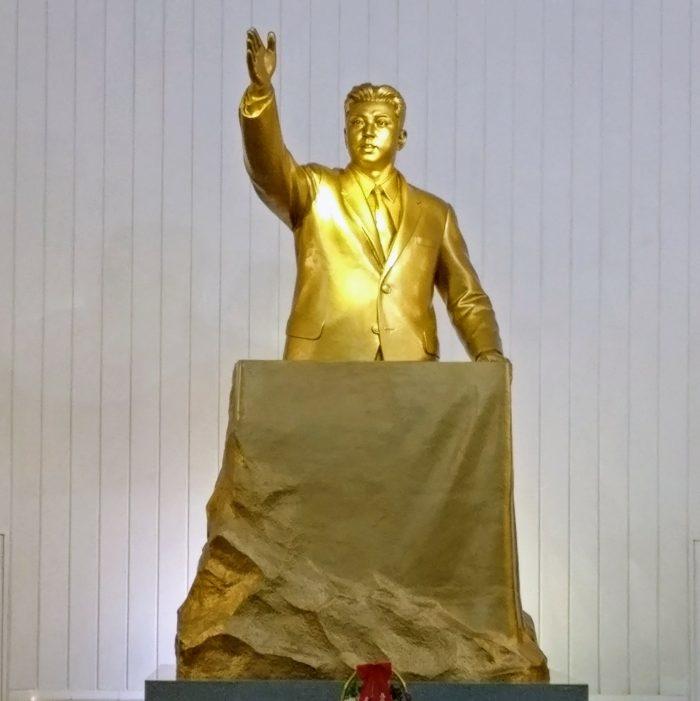 The Arch of Triomph 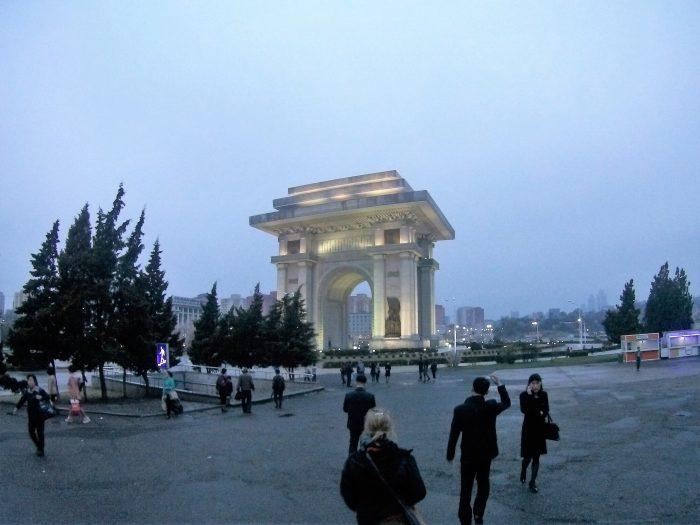 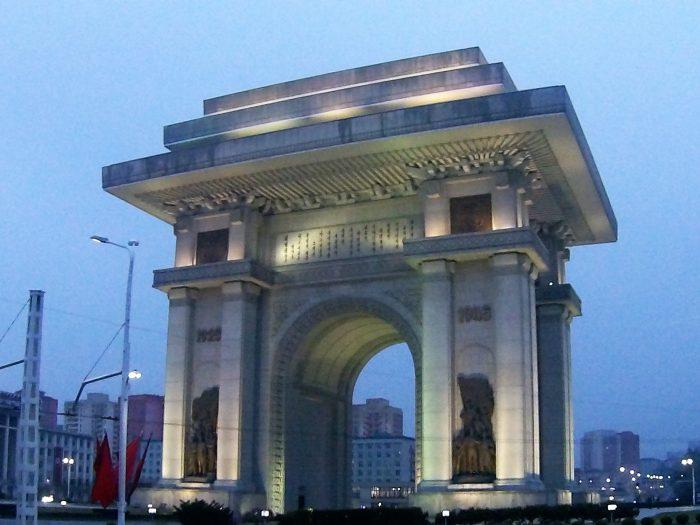 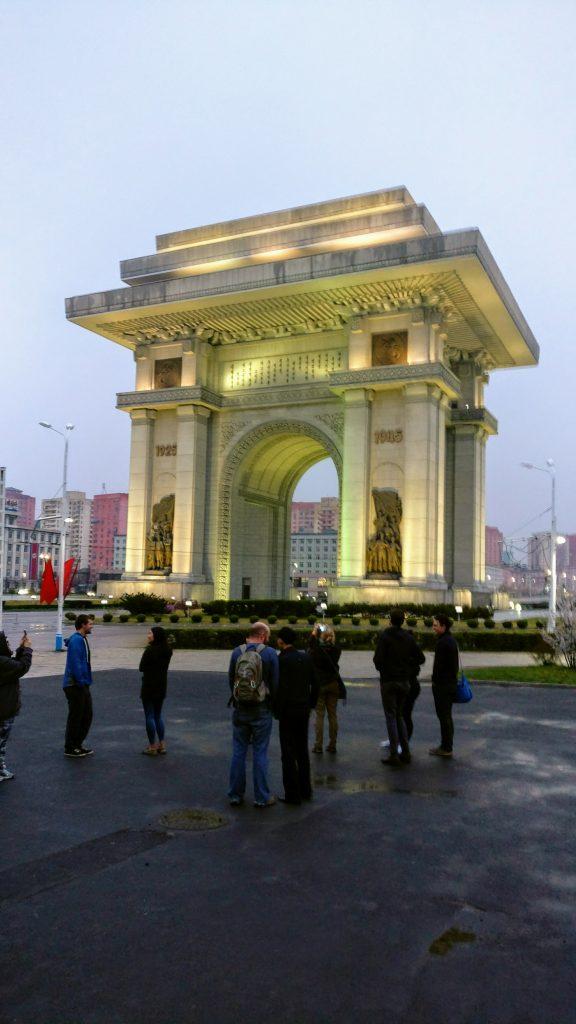 The Victorious Fatherland Liberation War Museum is a space dedicated to commemorate the Korean War (as we know it) or the Liberation War (as they call it). It is a huge complex where they celebrate their victory over the enemy (the US, of course). 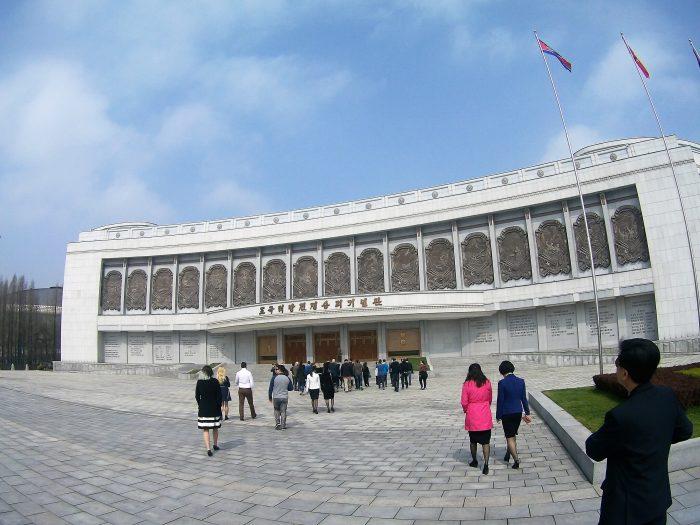 During your visit as a tourist, you are exposed to their version of the historical events that took place around the Korean War. A female local guide in a military attire explained to us in fluent English their side of the story every step of the way.

Some of this stories were widely inaccurate, for example, they believe the US and Japan started the aggressions that led to the war, but that approach has been more than debunked and there is academic consensus  blaming the North Korean side for starting it.

They also believe they won the Korean War. They truly believe it. I am willing to give them that. They managed to resist the most powerful army in the world without being obliterated, and they went out of it signing an armistice that left them out of the war with all their dignity. And the regime-sponsored propaganda has appropriated this truce as a full victory.

The museum consisted of an outside space where the spoils of war (all the aircrafts and weapons captured from enemy forces) were exhibited, and a proper museum building full of dioramas Disney-style. Pictures were not allowed inside the museum building, but think it looked like a Vegas casino with a retro communist theme. 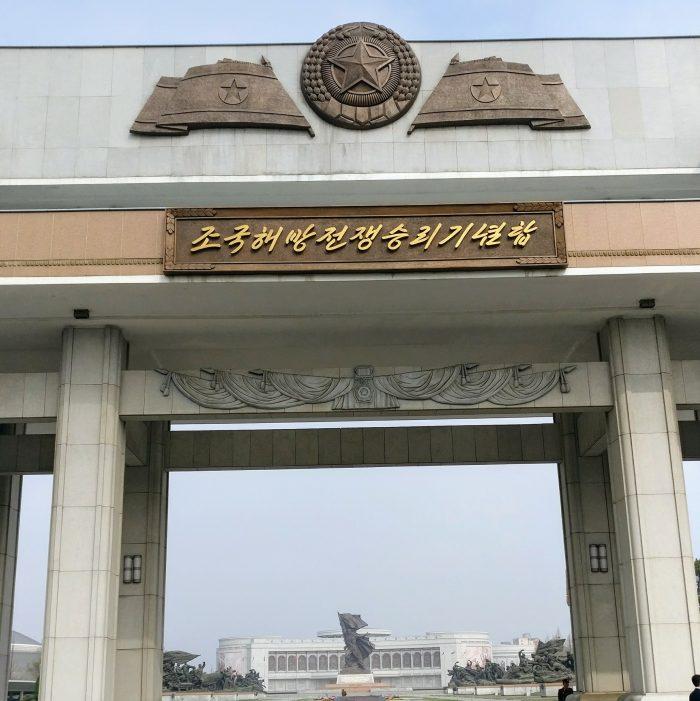 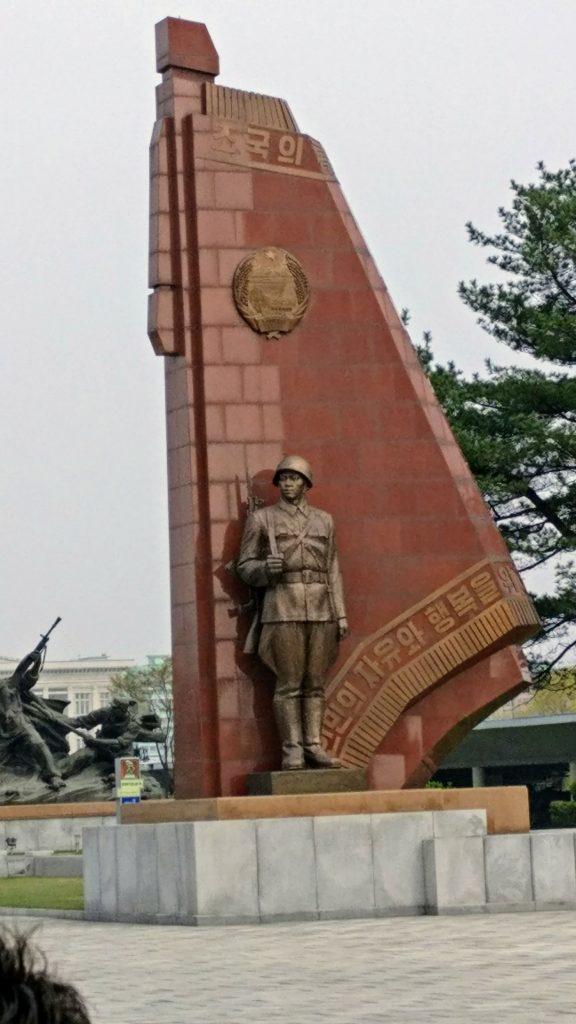 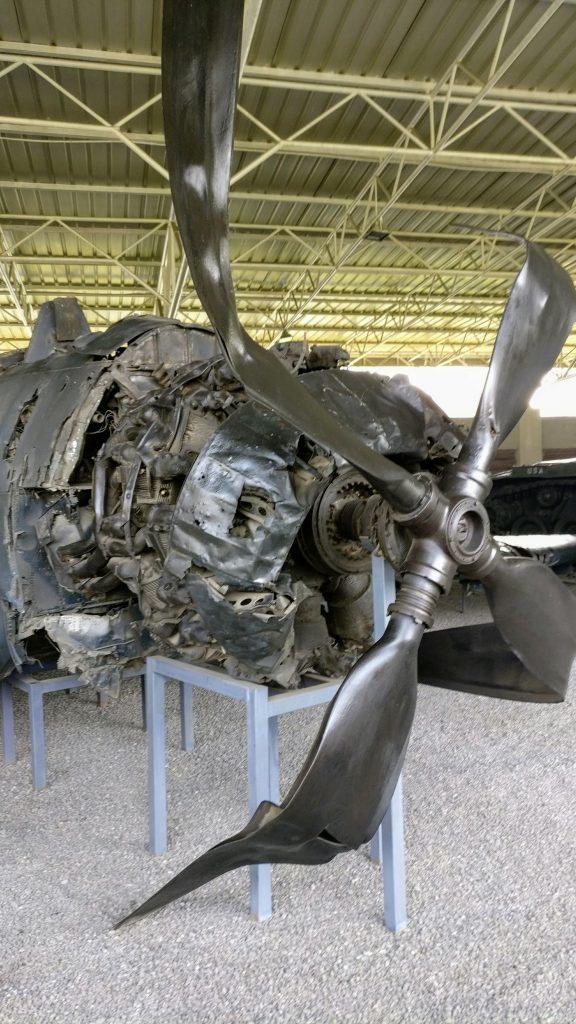 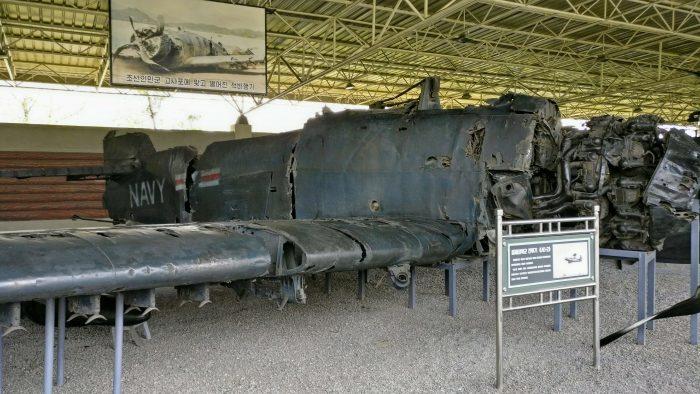 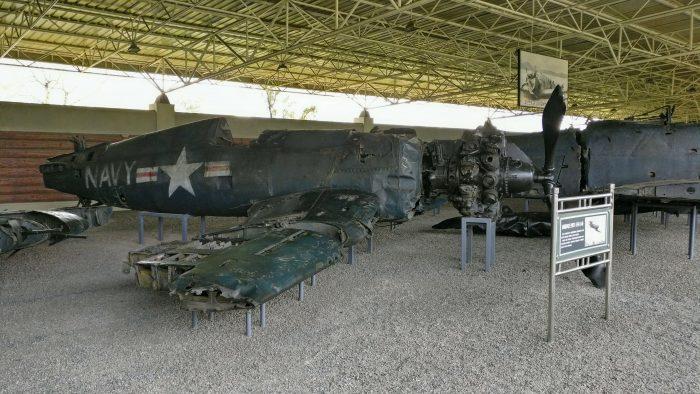 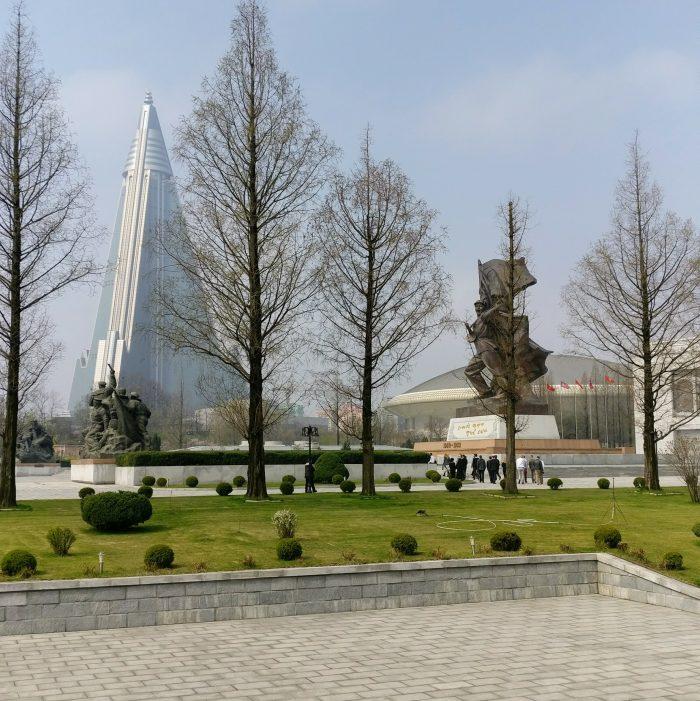 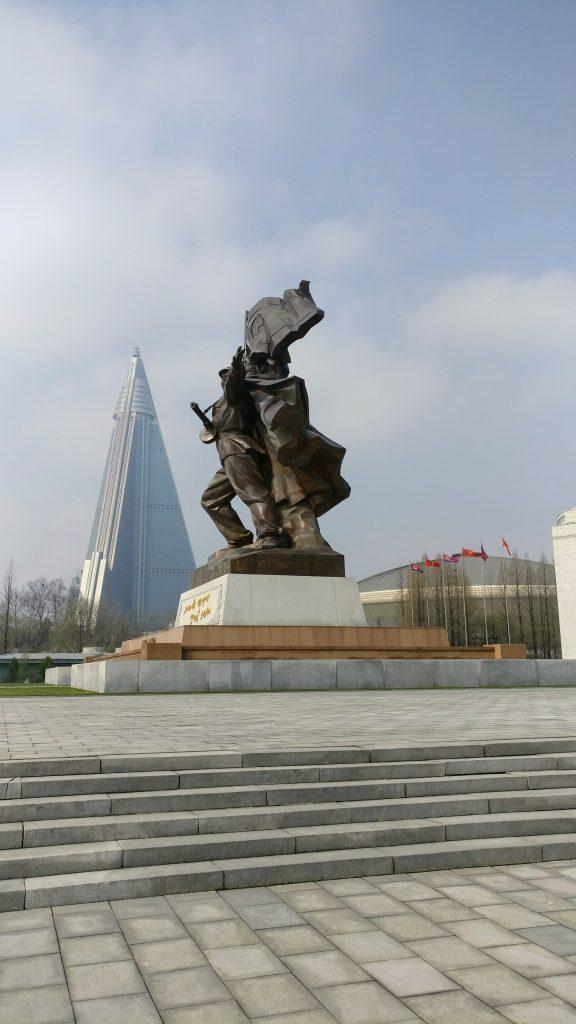 The Monument to Party Founding

This monument was completed to commemorate the 50th anniversary of the foundation on the Workers Party of Korea. It is quite impressive to look at with its 50 meters height. 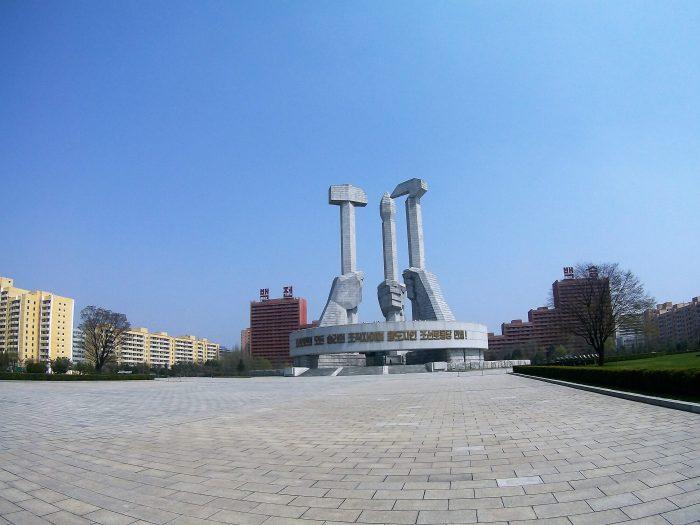 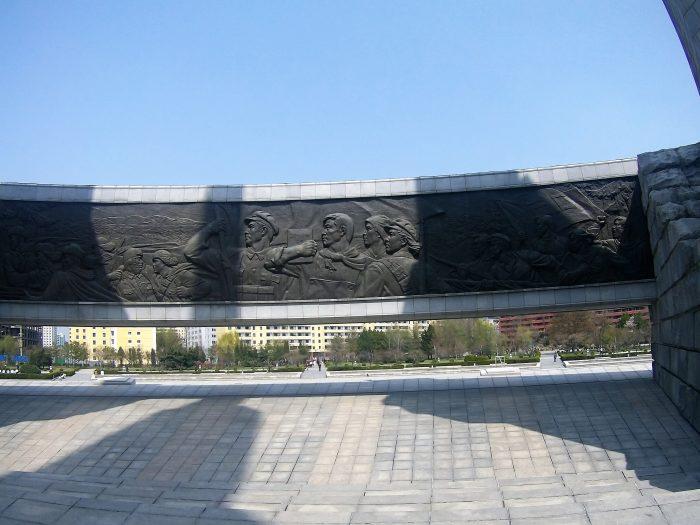 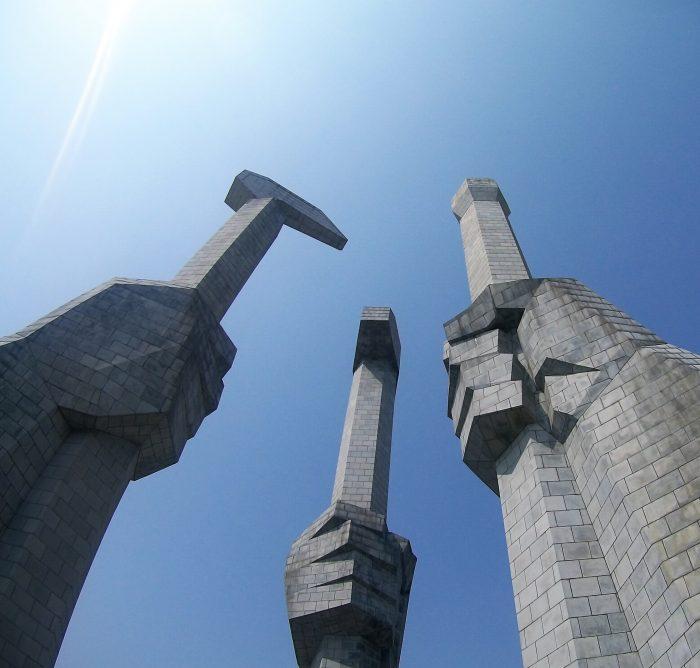 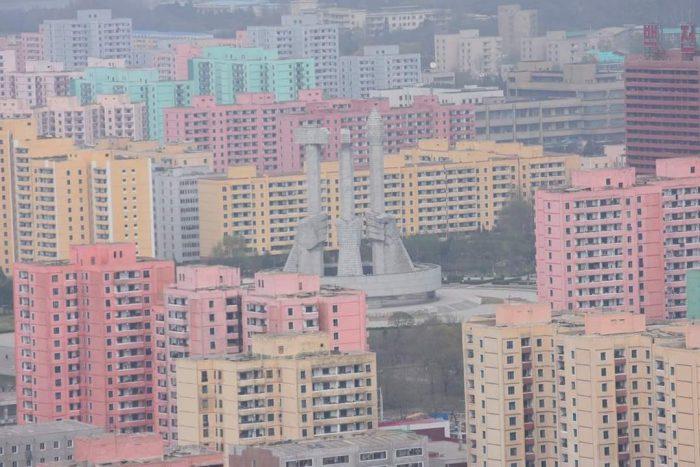 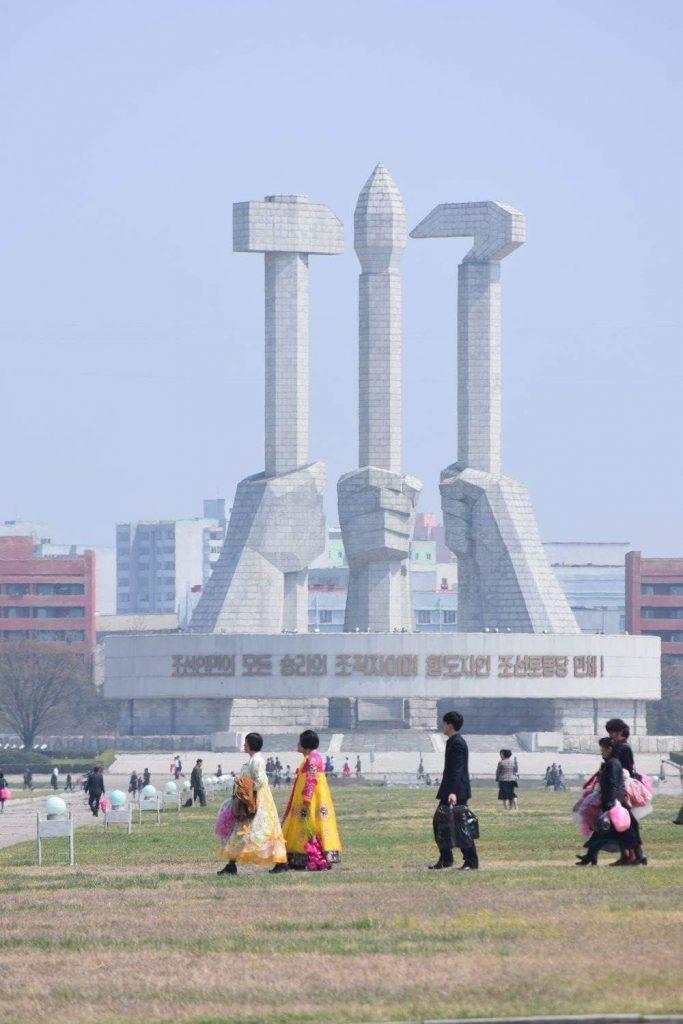 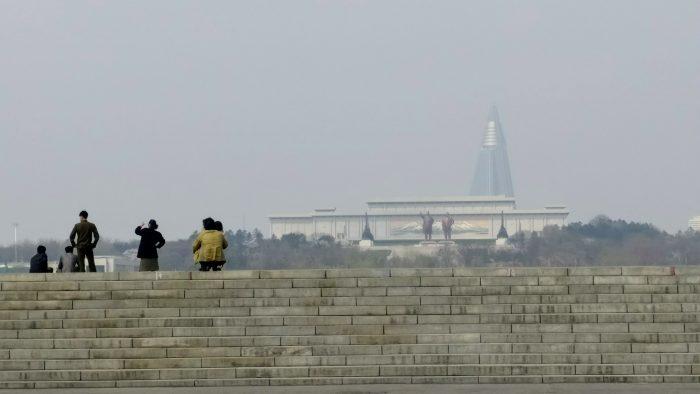 Another of the made-to-impress monuments and squares of the city. Overlooking the river, the 170-meters tower was built to commemorate Kim Il Sung’s 70th birthday. 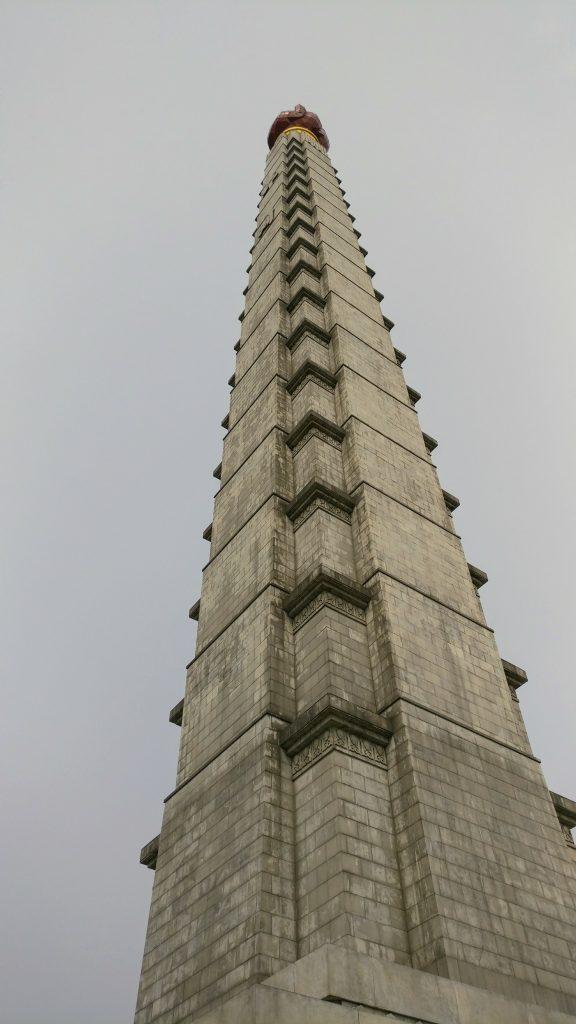 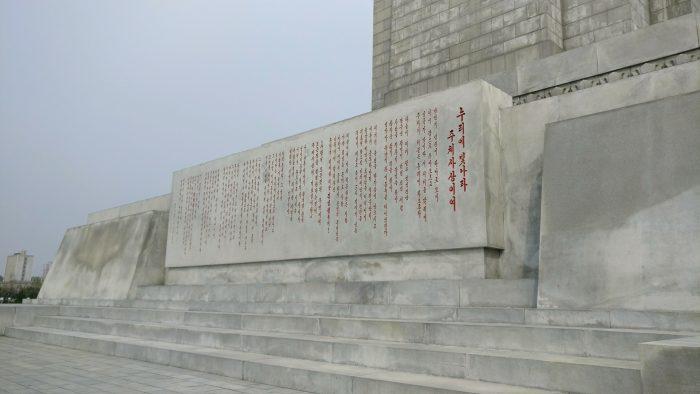 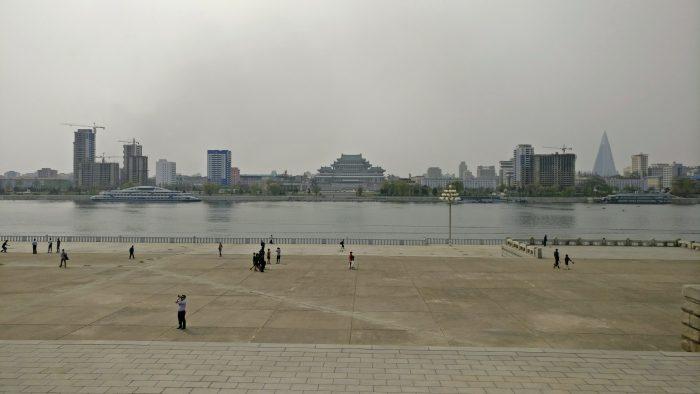 Kim Il Sung Square is at the other side of the river opposite to Juche tower. This is the place where the images of the military parades and are recorded. We visited it the day after the military parade and of course, it was completely empty. The propaganda billboards over the buildings looked so camera ready from the front but so cheap from the back. 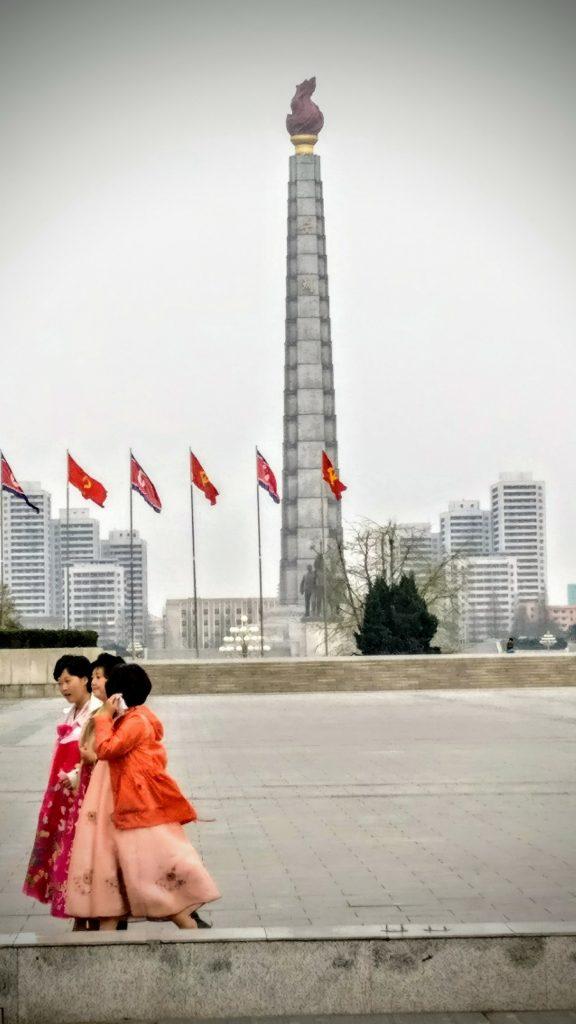 We also had the chance to walk around downtown Pyongyang. Little traffic, some public transportation, even some taxis around. 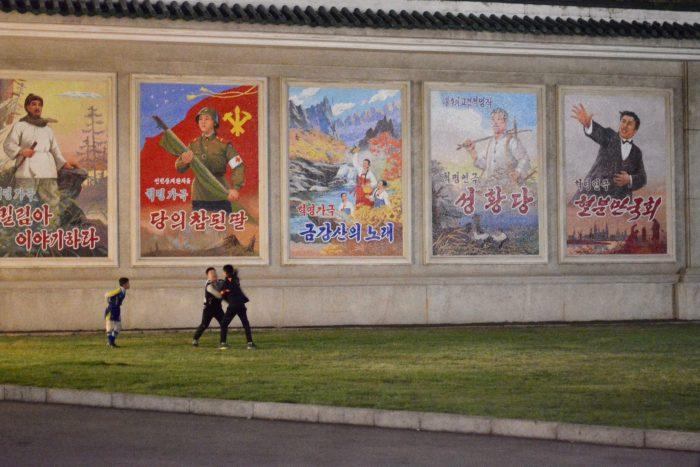 It is impossible to summarize this weekend in a post, but I’m trying to do my best. AS I’ve said before, the city is built to impress, to show off, to demonstrate they are a modern and developing country, but most of it is just a facade.

But the most impressive, and intriguing suprise I got from my visit to Pyongyang was the people. I still have to talk about the military parade, and I will elaborate on my impressions on the North Korean people then.