American Airlines is making changes to the complimentary upgrade process and award ticket upgradeability both effective May 20, 2017. 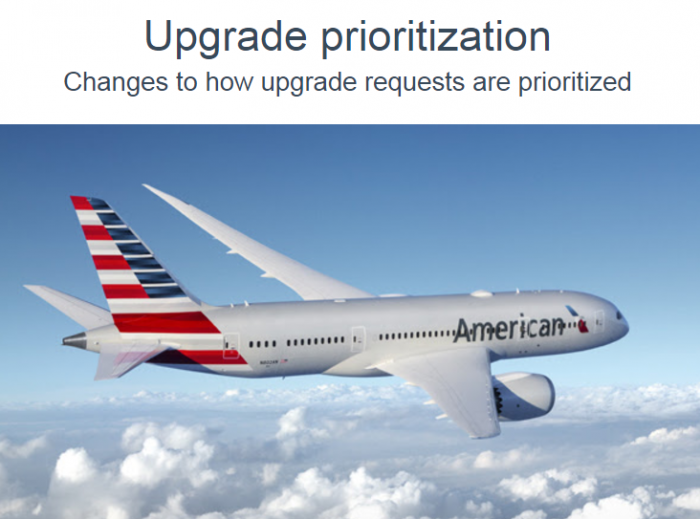 Upgrades are no longer processed based on the time requested and Concierge Key & Executive Platinum members can now upgrade award tickets as well.

You can access American Airlines web page for these changes here.

Upgrade priority within the elite level:

Remember that these upgrades apply to flights: U.S. (including Hawaii), Canada, Mexico, the Bahamas, Bermuda, the Caribbean and Central America

Type of upgrade also determines the order in which members are upgraded at the airport per:

Previously, the requested date was the factor for airport upgrades. Now, systemwide and mileage upgrades trump complimentary and 500 miler ones.

The 12-month rolling EQD is used within the elite tier to determine who gets upgraded. This means that those with the higher rolling EQD are upgraded more often.

It is very unlikely that there would be two members with the same EQD amount, so booking code and request date are mostly irrelevant.

Over time, this will build to a full 12 months and be updated daily.

Concierge Key and Executive Platinum members are now eligible for complimentary award ticket upgrades along with one companion. These are processed within the tier after upgrades on paid tickets are cleared. CK and EXP members must support companion upgrades using 500 milers.

If you think, processing upgrades based on the time they were requested, regardless of the fare class, made very little sense. Also, processing upgrades that are supported by instruments prior to complimentary ones when the upgrade lists moves to the airport is reasonable change that makes sense.

The losers here are EXP members that barely make the tier because the EQD is now the determine factor. Just bit surprising that American Airlines announced this changes mere four days prior it is supposed to take effect.

Whine Wednesdays: Legs Up On The Bulkhead? Acceptable Or Not?