Everybody knows the beauty of the shared services industry that brought us companies such as UBER and AirBnB but there is another option that peeks peoples interest: Flying Couriers for other people. 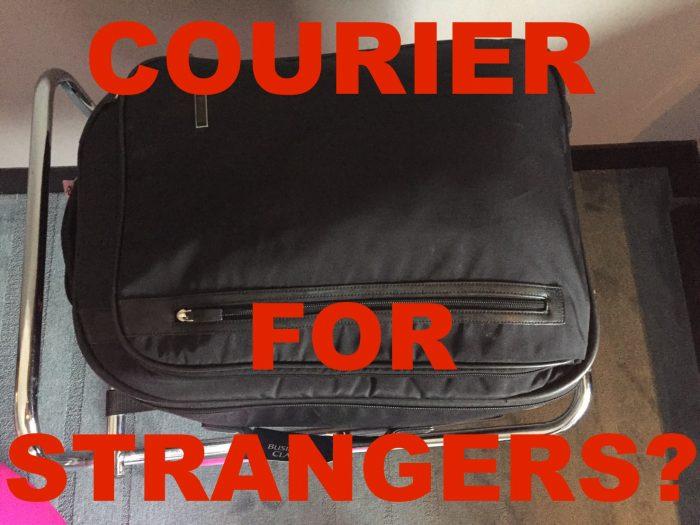 While it’s common that on board couriers transport items for companies around the globe, such services targeting a peer-to-peer customer base are relatively new and they do bear some risks.

Freight such as technical parts or even medical transports come with appropriate paperwork for customs, airline and transportation security entities but what if Joe from New York asks Jane from London to bring him a package or some merchandise for a reward of $50?

There was an interesting article about this topic on BBC Online (access here) and it’s disturbing.

The next time you take an international flight, how about transporting something in your suitcase for a complete stranger?

“I always take things back from my travels for family and friends,” says 45-year-old French airline worker Olivier Kaba. “Now not only am I able to bring things for others, but I get rewarded financially for doing it.

Olivier is a regular user of Worldcraze, one of three similar firms that have launched in recent years to help connect people who would like to buy something from a different country, with travellers who have spare space in their suitcase and want to make a bit of money by being informal couriers. …

The idea is that the buyer can quickly get his or her hands on a product that may not be available to buy or import where he or she lives (country A), or that the item may simply be a lot cheaper abroad (country B).

So with transactions made via the three companies’ websites and apps, travellers who are due to fly from country B to country A can purchase and transport the products for the buyers. They can then arrange to meet to hand them over.

Over the past 24 months Olivier says he has transported everything from three months’ supply of French salami to the US, bags of Japanese sweets called “Tokyo banana”, and 20kg of fabric samples for a woman starting her own business.

“I discover new products I have never heard of,” he says. …

And chances are sometimes you might also get a product that is either entirely illegal based on import/customs laws or it contains something illicit destined for it’s recipient overseas.

It starts with the Salami mentioned here. It depends on how such products are packaged and in what condition they are in order to be imported. For example taking a fresh Italian salami from Rome to New York could very well end up being the most expensive sausage of your life if you fail to disclose it to customs and they detect it. And you bet that their cute little dogs LOVE the smell of salami.

Another issue is duty free allowance when bringing items through customs. There are sites such as the one named here or GrabR that also facilitate shopping overseas for others and the items posted there and elsewhere range from small toys over expensive handbags to luxury watches.

That wouldn’t be a problem if the passenger would contact customs at the destination to pay import duty but failing to do so makes this transaction illegal and could end up in dire consequences for the person carrying it over.

I would gladly take items that are of harmless nature and little value for family and friends but I wouldn’t offer this service “peer-to-peer” to strangers. The little bit of money that can be made from this isn’t worth it and the shoppers are less likely willing to pay import duty which would likely make the entire transaction a wash.

You can actually make good money working as an official on board courier for established companies that provide you with the necessary paperwork and even pay for your flight. Several of my friends are doing this even though it’s far from the prestige that is often talked about. While they fly on occasion in premium class due to higher baggage allowance and priority, most of their flights are in plain Economy Class.