While spending some time in Malaysia last week I was surprised to see many videos playing at the airport and inside the KLIA Ekspres Train informing people about their passenger rights in case of delays and cancellations.

While it is common that airports sometimes (the exception rather than the rule) have leaflets an posters out to inform travelers, such active campaign is a rare step to make people more aware of their rights.

As a matter of fact airlines don’t like it at all if their passengers know their rights all too well and require the carrier to produce adequate compensation such as meal vouchers and hotel stays for longer delays as well as monetary compensation if push comes to shove.

Here are some quick snaps I took of the video that played on the train, outlining what passengers are entitled to in case their travel is interrupted: 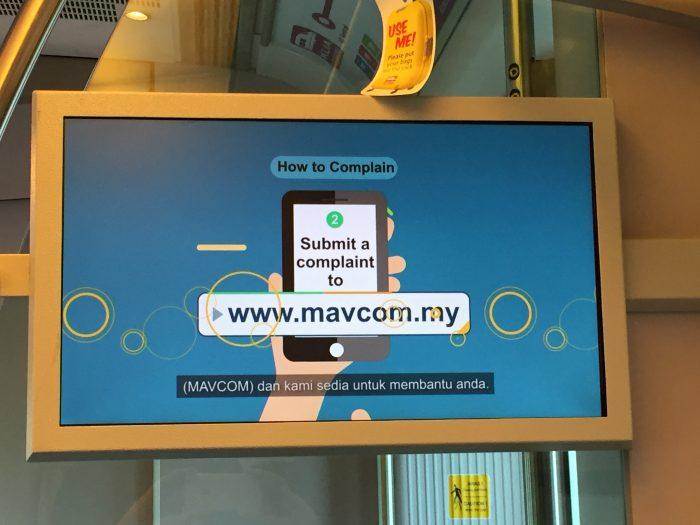 As a matter of fact I did use Malaysian regulator last year to lodge a complaint against Air Asia after the staff told a friend some weird story about a flight delay and handed over a boarding pass for the next flight two hours later. In fact her original flight left on time and was probably overbooked.

The regulator acted swiftly and requested a proper statement from Air Asia who issued a generous credit after the fact. I was impressed by the effective resolution since Malaysia isn’t usually the most reliable place when it comes to government run agencies.

The important part in this case though is that these passenger rights do not only apply to Malaysia but many other countries as well where airlines are required to provide care, refunds or flat out compensation in some cases.

In case of EU carriers or departures from the European Union and those countries that have adopted the EC261/2004 regulation for passenger rights carriers are required to have those rights in printed form available to passengers and also have to provide them unprompted in case of irregular operations.

Needless to say these are rarely available and almost never have I been provided with such a pamphlet if a flight had a long delay, misconnected or in case it was cancelled altogether.

It’s simply cheaper for air carriers to be scolded by the authorities for failing to comply every now and then instead of following the law which would lead to a spike in passengers actually requesting the compensation and care they are entitled to.

For the airlines this is a simple business decision, a choice between not following valid laws and caring for their passengers vs having to pay out millions over the year.

As far as authorities and their information campaigns are concerned it’s about battling these tactics and teaching passengers exactly what they are entitled to in case things happen to them. Even before they happen as part of a ‘preventive care’ for air travel.

Personally I claim such protection measures (hotel rooms, meals) multiple times per year and the same goes for financial compensation per EC261 (in 2016 I had 4 cases where I was entitled for a 600 EURO compensation, some of which I featured here).

In any case I try and inform everyone in my circle of friends and family about their rights when they are about to go on a trip. Uniformed customers are the easiest prey for airlines and the best we can do is a widespread education of travelers. So even if you know all about these things yourself, go ahead and tell your family and social circle about this as well!

Overbooking – What Is That And How Do Airlines Typically Solve The Problem (Without Violence)?