An arriving China Eastern aircraft slid off the runway this morning at Hong Kong International Airport (HKIA/HKG) amid heavy downpours that current has a grip on the city, leading to the closure of one runway. 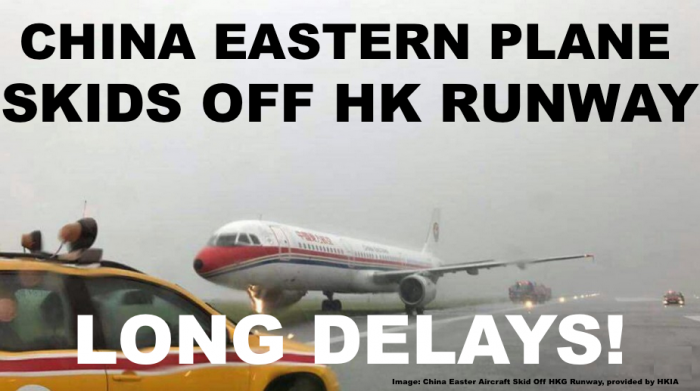 The closure of one runway in addition to the adverse weather conditions already led to heavy delays and cancellation at Hong Kong airport and it’s possible that incoming flights will be diverted to nearby airports.

Hong Kong International Airport is always operating on the edge of it’s capacity and even slight disruptions causes havoc in the operations of airlines flying in and out. Losing a runways and dealing with such bad weather at the same time is a disaster for the airport.

An article from the South China Morning Post (see here) reported from HKIA and described the conditions there.

A China Eastern Airlines plane slid off the runway while landing at Hong Kong International Airport amid a downpour on Wednesday morning.

According to the Airport Authority, flight MU765 was arriving from Nanjing on the north runway at about 10.50am when it veered off the tarmac.

The Hong Kong Observatory had issued a red rainstorm warning at the time, meaning heavy rain exceeding 50mm in an hour had fallen or was expected to fall. …

An Airport Authority spokesman said the plane slid but managed to come to a stop on grass next to the runway. No casualties have been reported.

“Due to the incident, operations on the north runway have been suspended, but the operation of the south runway remains normal,” he said. …

The north runway eventually resumed service at 12.40pm. With one runway out of action, 50 arriving flights and 59 departing flights were delayed, the Airport Authority said.

Meanwhile the delays and cancellations at Hong Kong Airport are mounting as can be tracked from the real time HKIA Departure Information (access here).

Even if the arriving planes will be able to land, those who have checked baggage might have to wait a very long time for their bags to be distributed as this is common at HKIA during bad weather. I remember waiting close to two hours last time I came in on British Airways during a heavy rain storm and similar experiences prior to that.

Flight services into and out of Hong Kong are subject to disruption, including delays, diversions, and cancellations, due to a disabled aircraft blocking the northern runway at Hong Kong International Airport.

The following Cathay Pacific and Cathay Dragon flight disruptions have been confirmed:

Additionally, a ‘Black Rainstorm Warning Signal’ was issued by the Hong Kong Observatory earlier this morning. The adverse weather conditions may cause further disruption. Passengers are advised to check conditions before heading to the airport.

To ensure you receive the latest flight status updates via SMS or email, please update contact details in Manage Booking.

Please check Flight Status before departing for the airport, for the most up-to-date information.

Rebooking will be waived for all tickets issued worldwide (irrespective of fare type) on/before 24 May 2017 for travel with Cathay Pacific/Cathay Dragon confirmed bookings involving Hong Kong on 24 May 2017.

Check your arrival/departure information with the airline to plan the travel accordingly. If your travel is going to/from/via Hong Kong today 24th May 2017 you might be able to change or cancel your travel free of charge based on the waiver notice issued by the respective carrier.

At least there were no injuries or worse for the passengers of the China Eastern flight and they were able to be bused to the main terminal after disembarking the aircraft.