British Airways passengers departing today (and likely tomorrow as well) should prepare for the worst as the airlines IT systems suffered an outage and the airline has cancelled all flights until 6pm UK time. 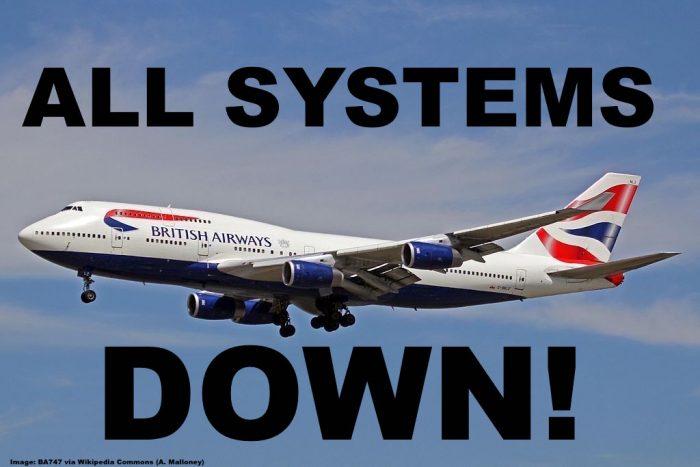 The issues started this morning with passengers being unable to check in both online and at the airport while those that got already checked in got caught up in shut down flight operations inside the terminal or waiting for hours at the tarmac.

This British Airways incident is just another one that lines up behind the many IT outages suffered by U.S. counterparts Delta and United earlier this year and no less chaotic.

British Airways has just announced through the media that all BA flights from Heathrow and Gatwick airports before 18:00 BST are cancelled. Strange enough their own website doesn’t show any information at all.

It should be possible to access the website back end irrespective of the issues BA faces with their operations related systems.

You can find collective information from The Guardian (see here).

British Airways flights around the world have been delayed on Saturday after a computer outage struck at the start of the UK bank holiday weekend and half term for some schools.

The cause of the issue remained unclear, but passengers on one flight were told by the pilot that the IT problems were “catastrophic”.

A BA spokesperson said: “We apologise to customers who are facing some delays following an IT outage this morning. We are working to resolve the problem as quickly as possible.”

The worst disruption affected terminal 5 at Heathrow airport, BA’s main hub. However, passengers returning from destinations in the US and Europe also suffered lengthy delays, with some sitting in planes on the runway for several hours.

BA’s website was unavailable and some travellers claimed they could not check in on the mobile app, with many venting their frustration on social media. Others said they had been delayed at the airport or on runways before take off. …

When an airline faces system outages this usually results in not being able to check-in passengers either online or at the airport, unable to process their baggage, shutdown of all ticketing system which means they also can’t endorse passengers over to other airlines as well as complete shut down of flight operations / flight management.

British Airways tweeted to their customers a few hours ago: 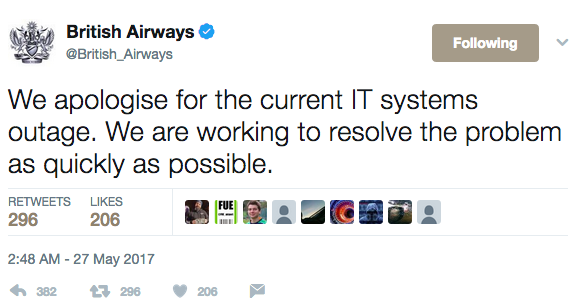 Meanwhile tensions are running high and passengers appear to have reached a boiling point: 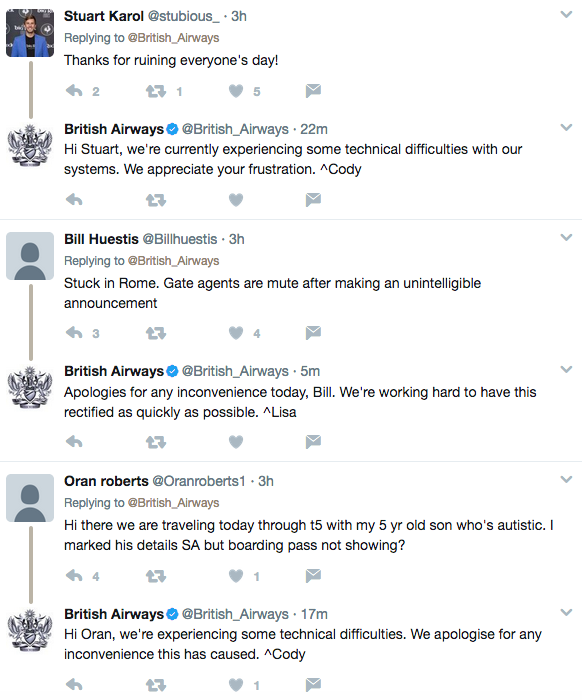 This is obviously not something that the airlines has chosen to do in order to annoy their customers and the front line employees are likely having a horrible day as well.

Expect the rebooking counters and lounge desks to be packed with people who have exactly the same problems as yourself so if you need an urgent re-booking and are in danger of missing a crucial flight you might want to consider booking it yourself with another carrier.

In some cases your travel insurance such as American Express can also help your out or at least cover your expenses in some way. You can always ask for a full refund for your original ticket from BA later.

I suggest to check if your flight is impacted by this problem (very likely as at the moment this affects ALL British Airways flights) and depending on the severity of it decide what the best course of action is. This includes the aftermath of this situation. If it’s a minor delay then maybe just sit it out. Should the flight be cancelled check if there are other flights of different carriers available.

You can expect receiving some sort of compensation from BA Customer Relations but probably have to write in for that. Passengers should be covered under EC261/2004 protection rules which also includes monetary EU Compensation of various amounts depending on the flight (distance). Keep in mind though that BA likely won’t be able to provide some of the duties outlined in the regulation (such as rebooking) without their computers.