I had the opportunity to visit North Korea during the celebration of the 105th anniversary of Kim Il Sung, their supreme leader and founder of the republic. Even with the limited access you get as a tourist, we were able to experience first-hand many things the news usually do not explain.

The Day of the Sun, April 15th, is the most important national holiday in North Korea, set to commemorate the birthday of their supreme leader, Kim Il Sung. The celebrations around this date were one of the main draws of the travel agency when marketing the tour we took part of, including attending to the military parade, of course.

In case you missed it, you can access the first part of this review here, and the second part here.

Kimilsungias are a hybrid breed of orchids first created in Indonesia in 1964. According to the story told by one of the local tour guides, President Sukarno of Indonesia insisted on naming the flower after Kim Il Sung during one of his official visits to the country. North Koreans believe this flower’s true name is Kimilsungia, and that everybody else in the world calls it this way (kind of cute, but also kind of scary as a proof of the distorted historical narrative local people is indoctrinated with).

The Kimilsungia Flower Festival is a large display of these orchids, all set up decorating shrines and dioramas honoring their dear leaders and the achievements of the revolution (mostly represented by Pyongyang’s landscape and emblematic buildings or monuments.

This festival was a big deal for the locals. You could see them visiting the display wearing their best outfits, and professional photographers all over the place taking family portraits. One of the things that called my attention was the lack of smiles of the people when having their portraits taken. You can only guess if they do not smile because they have no reasons to be happy… 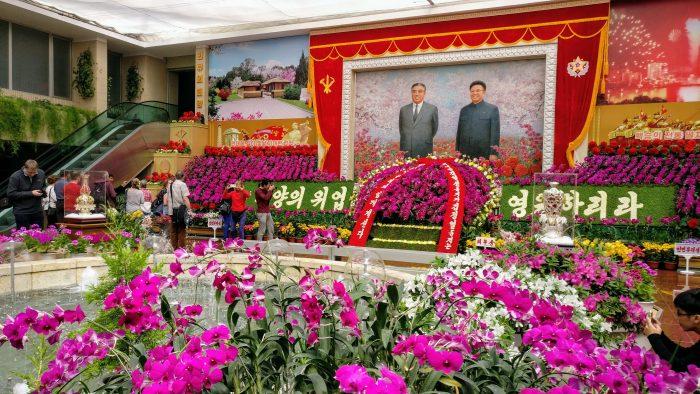 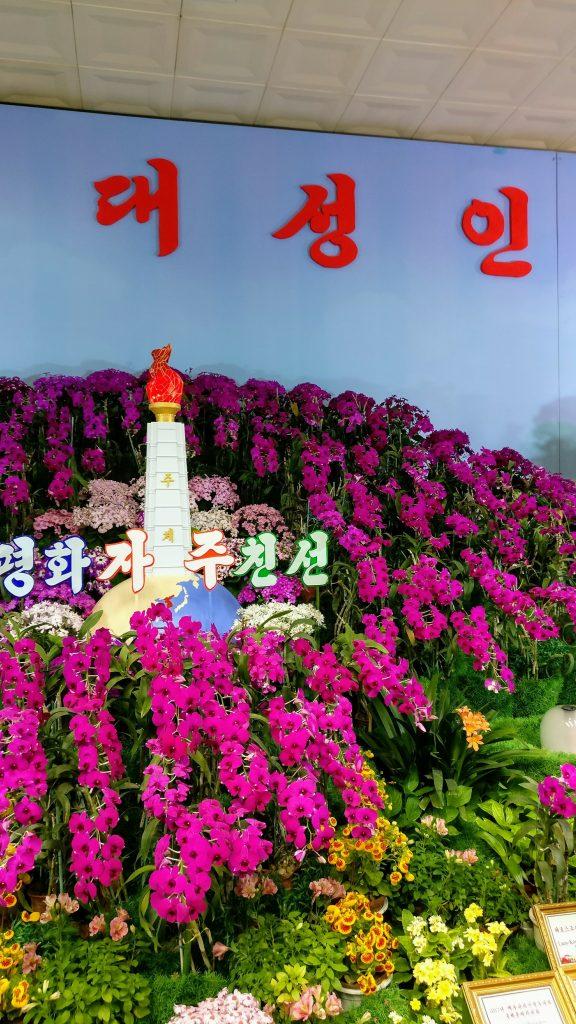 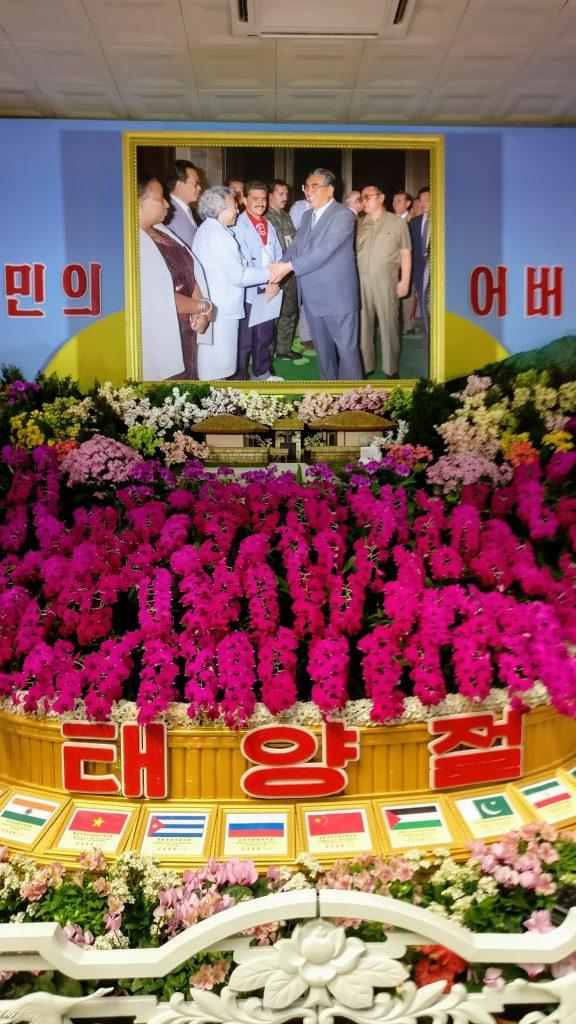 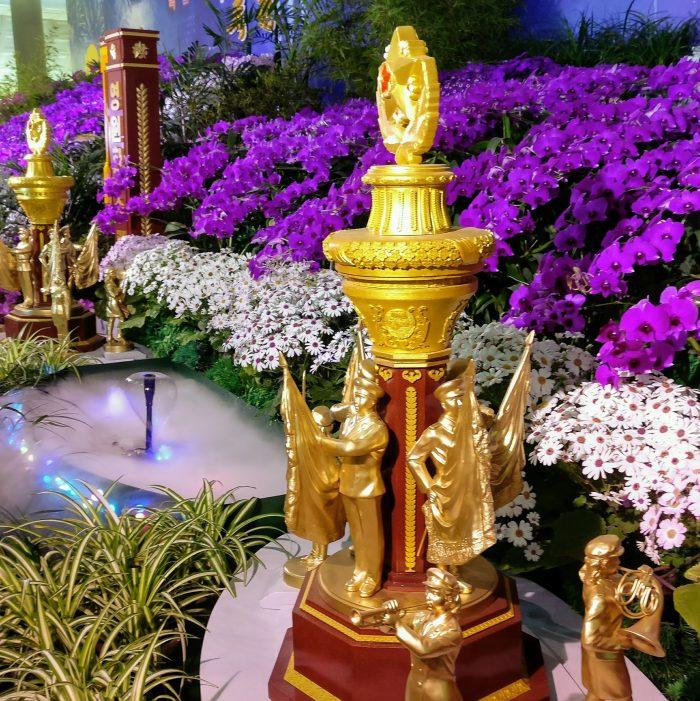 Yet another proof about the porous Chinese border and how Western brands and items make it into the country: at the flower festival gift shop you could buy Mickey Mouse dolls…. 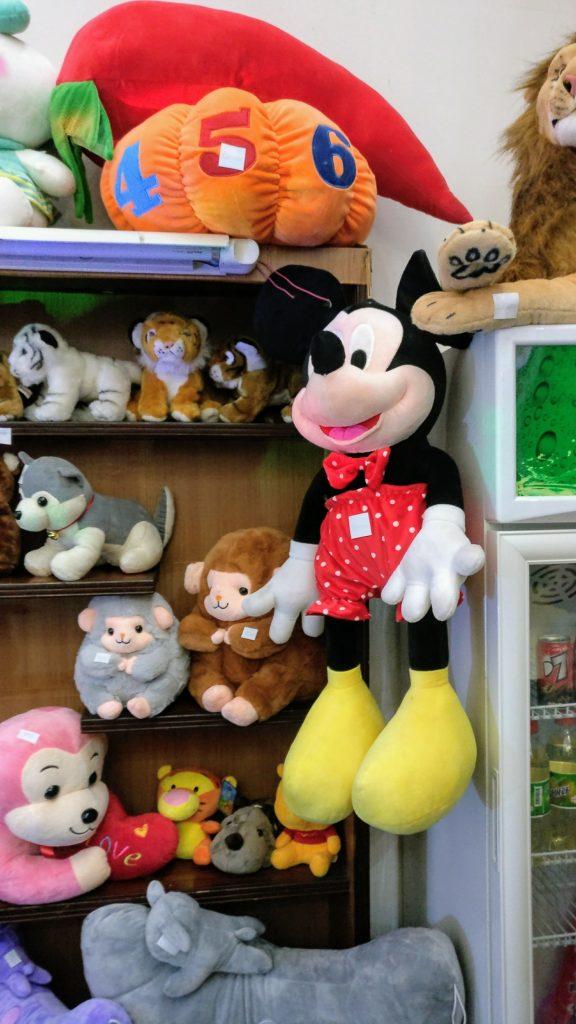 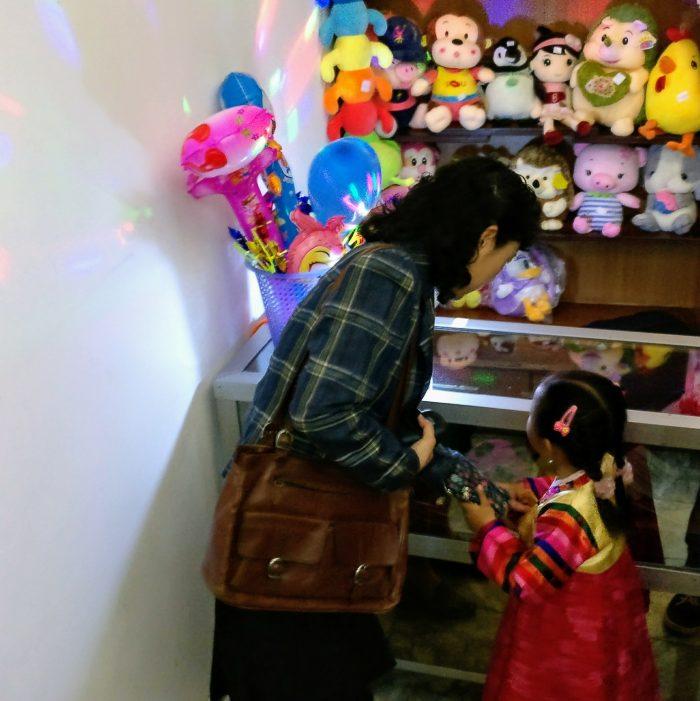 The main attraction of the Day of the Sun, both for the locals and for us tourists, was attending to the Military Parade that took place that day.

Attendance to the Military Parade was not included as one of the tour activities in their promotional brochure. Due to the secrecy levels managed in that country, no confirmation of the parade happening was given at any point of our tour. But everybody knew it was going to happen. The day before the parade our tour bus had to re-route a few times due to unexplained “street closings”. As I have mentioned in my previous installments, there is no traffic in Pyongyang ever, and these closings could only be related to parade rehearsals.

On the Day of the Sun, we were not granted access to Kim Il Sung square, the place where the main acts were taking place (if you follow the news, all the images of the military parade you saw were recorded in Kim Il Sung square. Alternatively, they took us to a random corner in one of the large avenues of the city.

The first thing that got my attention was, of course, the military weapons on display, tanks rumbling, and the large covered trucks with the missile (unarmed) bodies inside.

But soon enough my attention was drawn away from the military display. I started observing the people around me, and their reaction towards the soldiers parading was mesmerizing.

Their reaction was of joy. You could see them cheer their soldiers. You could see choreographed groups of ladies dancing to their soldiers. But most of all, you could see all of them were grateful, and that is when it hit me. North Korean people still live in the cold war, they still live afraid of the day that finger will press the button that will release the bomb that will erase them from earth. They believe they are in high risk of obliteration. And they thank their army for keeping them safe. They would scream on top of their lungs thank you, thank you, thank you, every time a truck full of soldiers would cross in front of us. 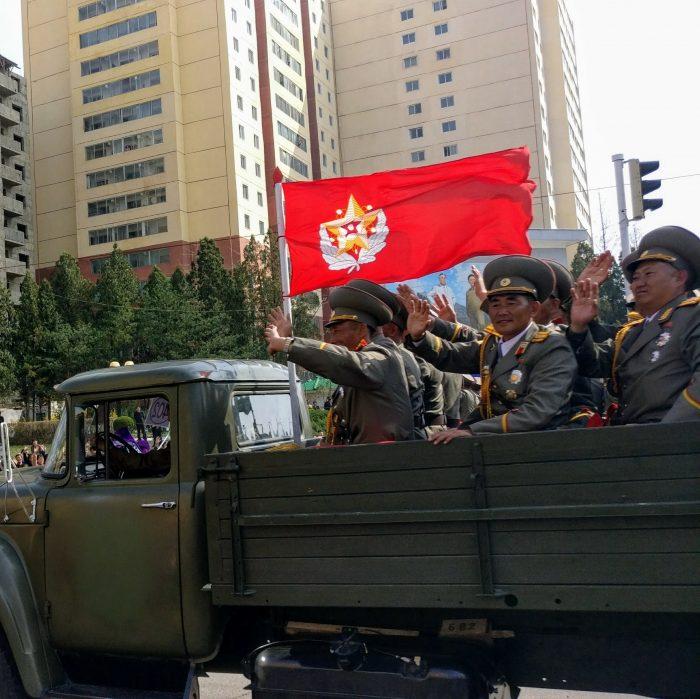 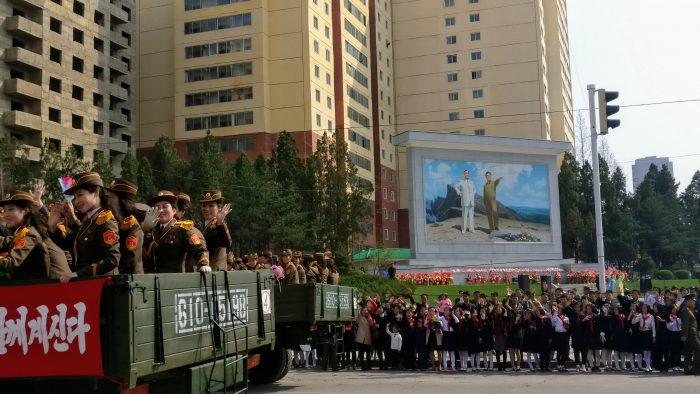 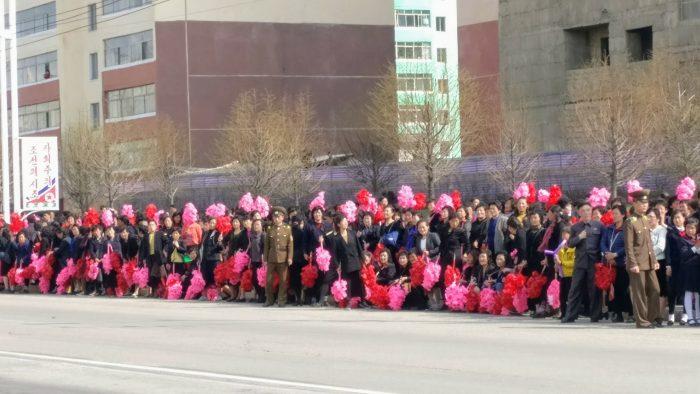 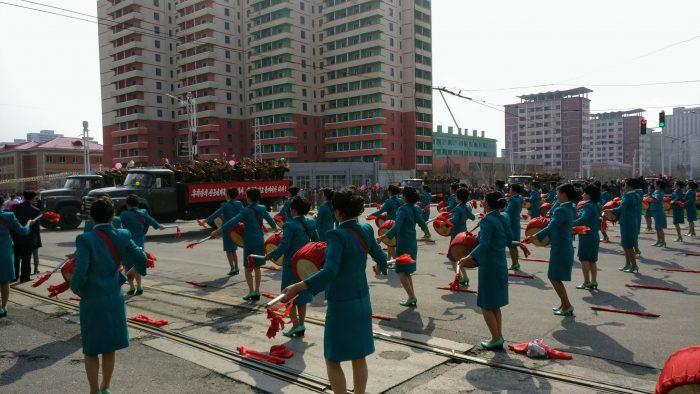 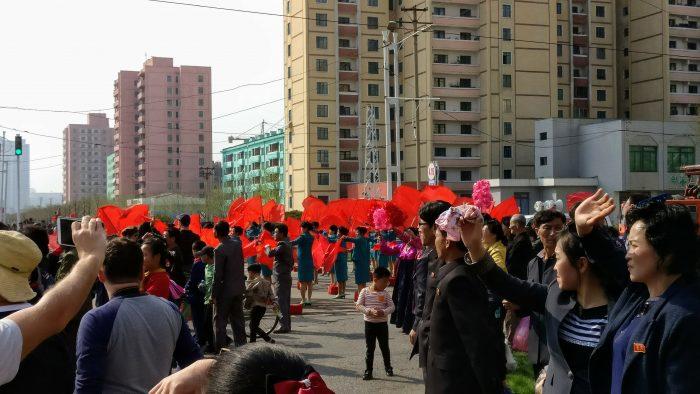 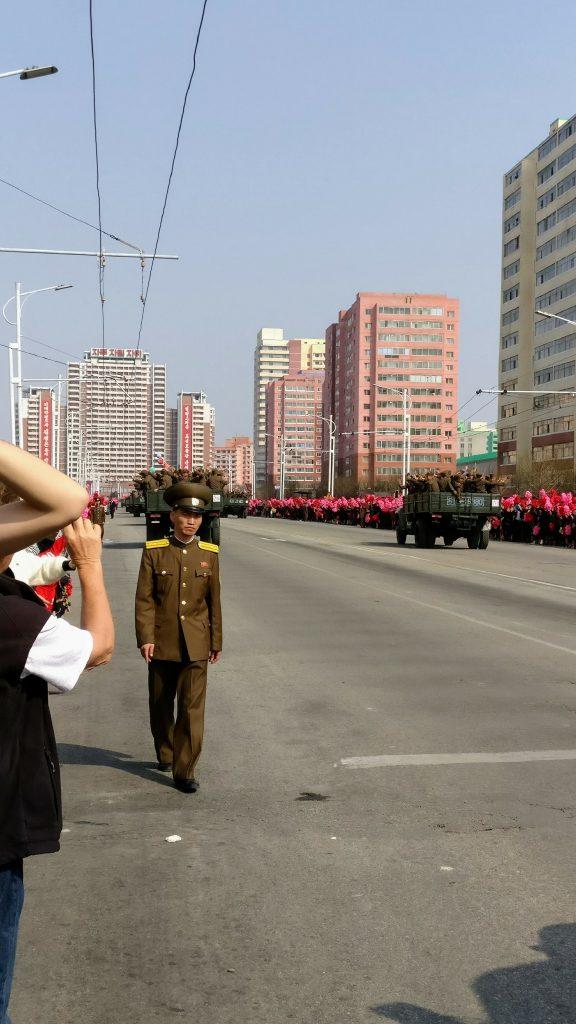 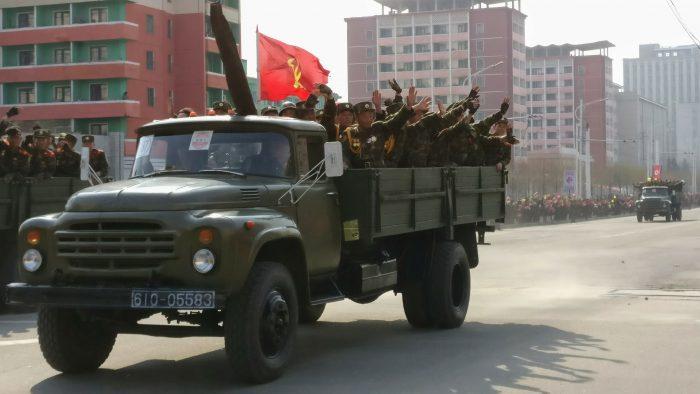 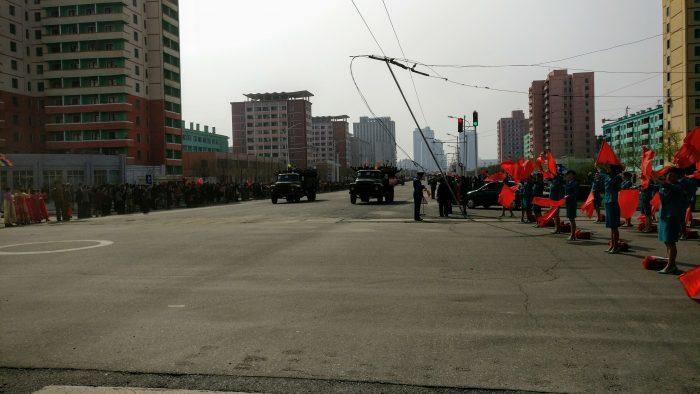 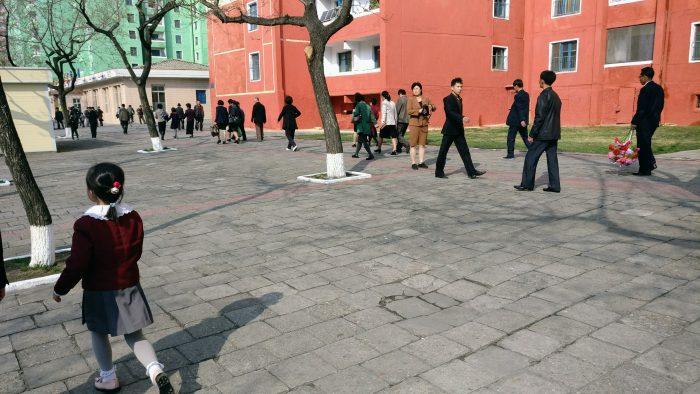 After dinner, we were taken to the river banks to see the fireworks display, the closing activity for the holiday. Again all the locals filled the river banks waiting for the display. The whole thing lasted for good 20 minutes.

When you talk about North Korea it is easy to forget that beside the borderline crazy leadership the country has, it is full of normal people who are just victims of the circumstances. Watching them cheer the army caused a deep impression on me and they preconceived ideas I had about the country before visiting. It is complex to describe how it felt. I was mostly mesmerized by the people’s reaction, their happiness. You could see them smile.

All that left me wondering how weird the whole situation is. The regular people, normal by all accounts, also supports and cheers a very questionable regime. And it does not look like an act or something they are forced to do. It is like a collective madness of sorts, induced from all the propaganda they are indoctrinated with since they are kids. If you have Netflix and you are interested in the subject, I suggest you watch an excellent documentary by a Spanish filmmaker called “The Propaganda Game”, it was an eye opener for me.