An internal email of Emirates Airlines was leaked to the public where the Uniforms Division instructs all Taiwanese crew members to take off their Taiwanese Flag pin and replace it with the Mainland China pin.

Even though the Emirates manager who sent out the email has back paddled and apologized over the email after an outrage of affected crew members, this matter caused quite a ruckus.

An Anonymous Emirates Emirates crew has reported on social media that the company has instructed its employees to comply with the “One China” principle, and to remove the “Chinese” flag from the Republic of China (Taiwan) while on duty and to change the flag to the Peoples Republic of China (PRC) one.

Emirates has subsequently apologized for the email and decided for the temporary absence of any badge.

Why all the trouble?

Apparently (as per the communication relayed by Emirates) the Chinese government has requested the airlines or the UAE government (which is essentially the same) to comply with the ‘One China Principle’ and to stop respective flight attendants from wearing the Taiwanese national flag pin. Emirates does operate a flight to Taipei operated by an A380 aircraft.

The communique was posted to social media (various aviation boards): 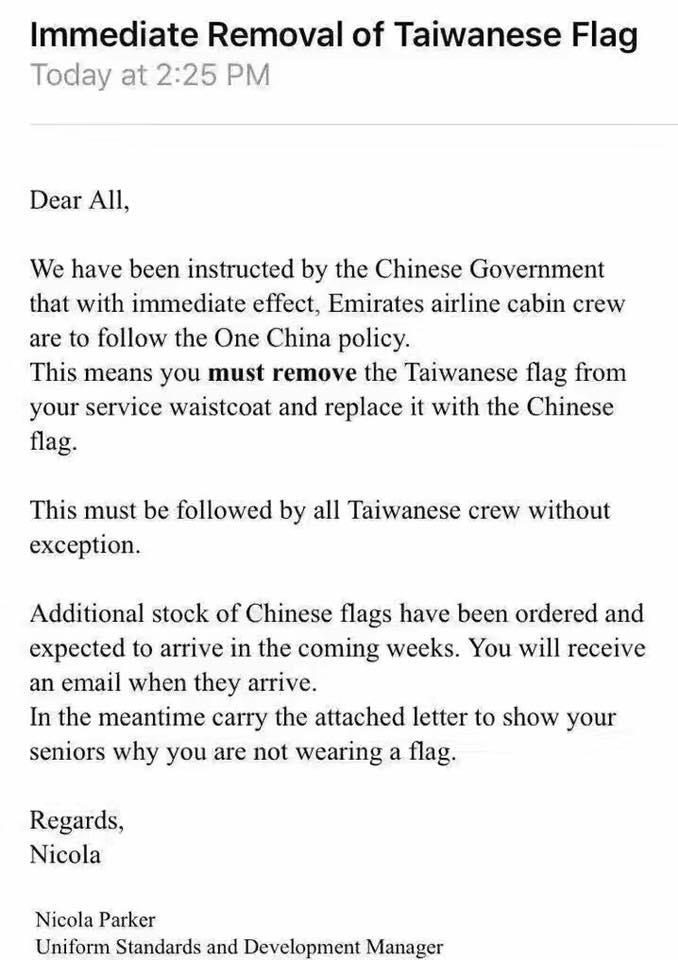 Short after this email went out the department must have received a barrage of complaints filled with outrage, prompting Emirates management to reevaluate the matter and apologize.

… Angry Taiwanese residents have called for a boycott of Emirates while others blamed Beijing over the airline’s controversial order.

… For airlines seeking to do business on the mainland, the wider goal is securing permission to launch more flights between China and their home countries.

Emirates is seeking more take-off and landing slots at Chinese airports and has a desire to fly to more destinations in the mainland and more frequently. The Dubai carrier operates 39 flights a week to Beijing, Shanghai, Guangzhou, Zhengzhou and Yinchuan, and in 2015 carried 1.3 million passengers, according to the airline.

The airline has also stated previously that it flies to 54 cities in 30 of the 65 countries identified along the Belt and Road Initiative. …

If this entire episode will cause more harm than good remains to be seen. It’s obviously a sensitive issue and restricting their Taiwanese crew in such a way is the best way to cause trouble.

The ‘One China Policy’ is a longstanding principle the mainland PRC government advocates and most countries oblige by in order to keep good diplomatic relations with China.

Going so far as to asking a national carrier to change flag pins, especially when said airline is actually flying to Taipei seems sort of petty though. Doesn’t Beijing have a bigger fish to fry instead of worrying about such mediocre details? Of course Emirates could stop flying to Taipei altogether and take a cut in revenue. Said flight is booked rather solid and operated by an A380 aircraft.