A Malaysia Airlines passenger on board MH128 from Melbourne to Kuala Lumpur threated to detonate explosives and demanded access to the cockpit while yielding a black device that turned out to be a powerbank.

The suspect was then subdued by crew and other passengers while the aircraft returned to Melbourne where the passengers were evacuated after security forced entered the cabin.

Just a few years after Malaysia Airlines lost 2 aircraft in tragic accidents they now had to deal with the possibility of another accident which thankfully turned out to be a bluff by the suspect – there was no bomb!

The Sydney Morning Herald (see here) spoke to some of the passengers and also published images that started circulating in social media.

A late-night Malaysia Airlines flight was turned back to Melbourne Airport shortly after take-off following a security incident involving a “disruptive” and “threatening” passenger who tried to enter the plane’s cockpit while carrying an unidentified black object, the airline and local police say.

One fellow passenger described seeing the man behaving erratically and threatening to “blow the plane up” before he was eventually pinned to the floor and subdued by others on the plane. A Malaysian government official later told local media the man had been holding a power bank, or mobile charger, not an explosive device.

Flight MH128, which left Melbourne for Kuala Lumpur at 11.11pm, was turned back “after the operating captain was alerted by a cabin crew of a passenger attempting to enter the cockpit”, the airline said in a statement. …

Two young Australian men who were passengers “went to work on him and got him in the shackles good and proper, they were the heroes”, Mr Leoncelli said. A picture taken by another passenger and posted to Twitter showed a man lying flat on his stomach on the floor of the plane with his hands bound behind his back with plastic handcuffs.

Several passengers claimed the individual was intoxicated and could have acted in a drunken rage. 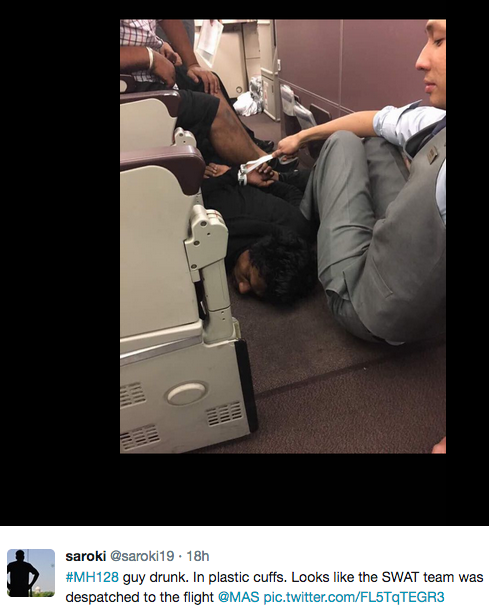 The flight was diverted back to Melbourne soon after take off: 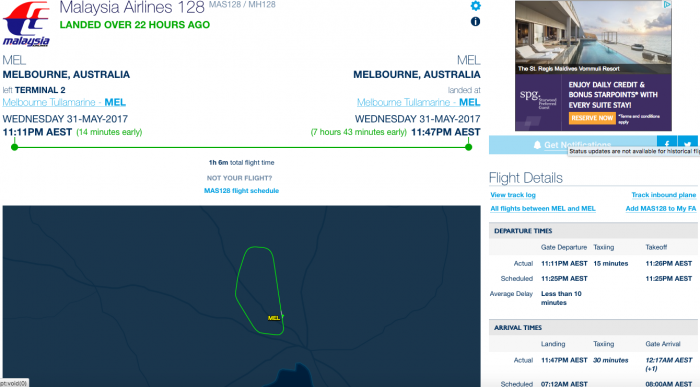 The entire affair took just around an hour and after that the flight was on the ground again, stopped at a remote stand  where security forces entered the plane.

The flight departed at 8PM the following day, arriving at Kuala Lumpur at 2am – a substantial delay but at least nobody got injured.

Malaysia Airlines had a lot of bad luck in recent years and thankfully this guy was just a drunken idiot who will no doubt suffer the consequences of his actions. He can probably be lucky that they offloaded him in Australia and not in Indonesia or Malaysia where he would rot in a much less comfortable prison.