How would you like a 18 hr flight on United Airlines? Soon you’ll have the chance to try it as the airline just announced a new nonstop flight from Los Angeles to Singapore starting October this year.

The route will be operated by a Boeing 787-900 Dreamliner which features their new Polaris Business Class product as well the Economy/Economy Plus.

Sitting on a 18 hour flight is exhausting enough but in Economy Class it sounds pretty horrible especially on United Airlines 3-3-3 configuration (Polaris has 2-2-2). I took the American Airlines flight from Dallas to Hong Kong once and ended up in Main Cabin Extra for 17 hours. Awful!

USA Today (see here) has an article in their Travel section about the new route.

United Airlines already flies the longest non-stop route of any U.S. airline. Now it’s ready to add a route that would become the longest of any carrier flying to or from the United States.

That will come this fall, when United plans to launch an 8,700-mile route connecting Los Angeles and Singapore. …

It also will become a contender for the world’s longest flight when measured by flying time. United’s projected time for the Singapore-bound portion of the journey: a whopping 17 hours, 55 minutes. …

And there will be yet another superlative for United’s new service: the L.A.-Singapore route would also become the world’s longest regularly scheduled route to be flown with a Boeing 787 “Dreamliner.”

United already holds that title with its existing San Francisco-Singapore route, which will become the world’s second-longest Dreamliner route when the L.A. route starts Oct. 27. United plans to fly both of its California-Singapore routes with the 787-9 variant of the Dreamliner.

Based on the SeatGuru configuration guide (access here) the Dreamliner features the previously mentioned 2-2-2 seating configuration for Polaris Business Class and a 3-3-3 layout for Economy Plus/United Economy Class. 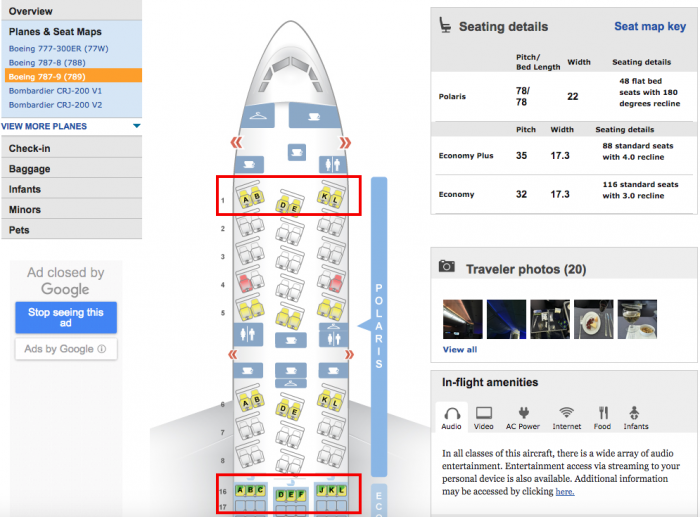 18 hours in a 3×3 seater ‘tuna can’ is a horrifying prospect if all seats are occupied and as a leisure traveler I can’t help but wonder if it wouldn’t be more comfortable to fly via Tokyo and have a brief stop or transit there. Not that the seating in Economy would be much different but at least you can leave the plane after 10 hours and recover a little.

There will be an unfortunate consequence though for travelers between Singapore and Hong Kong:

… However, one side consequence to the new U.S. options will be that United will discontinue its current Hong Kong-Singapore option once the L.A. flights begin. That route — a continuation of United’s Chicago-Hong King flight — will be redundant given the new California options, Quayle says.

The United flight between the two cities has been popular by some business travelers because it’s the first flight that leaves Singapore to Hong Kong in the morning and the last flight going back to Singapore in the evening, allowing a full (work) day before heading back.

If the San Francisco – Singapore route is really as successful as United says then maybe people don’t mind to fly this long. Problem is that the United product in both Business but especially Economy Class is really nothing to look forward to.

I remember the Singapore Airlines nonstop flights from LA that are coming back soon (next year) and even in SIA’s excellent Business Class it was an exhausting trip.