It is Ramadan time in the Middle East that doesn’t seem to extend to the politics that we don’t cover here in the LoyaltyLobby unless it affects travel.

United Arab Emirates, Saudi Arabia, Egypt and Bahrain have all decided to cut diplomatic ties with Qatar. It unclear at this time what does this means to Qatar Airways. Can the airline still operate flights to/from these countries and use their air space?

You can check Qatar Airways flight status here and read more about this on Washington Post’s website here.

EDIT: Qatar Airways has now announced that they are suspending all flights to/from Saudi Arabia, UAE, Egypt and Bahrain on June 6, 2017 (access here):

EDIT: Etihad Airways has announced that they will suspend all flights to/from Doha from June 6, 2017 (access here): 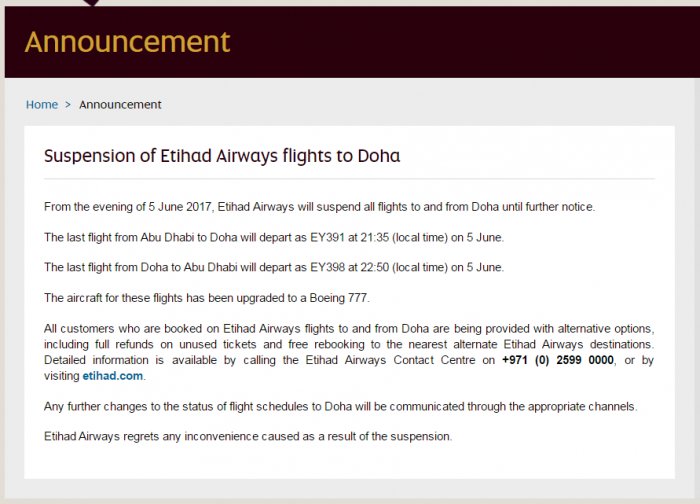 I am not even trying to understand what is going on in the Middle East but this is probably something to do with the Sunni and Shias. When you throw in Al-Jazeera news channel that many Gulf governments don’t like and a successful airline, you have a perfect storm.

Let’s hope that cooler heads will prevail. Qatar Airways will be in big trouble if it loses access to the airspace and airport of these countries.