This weeks Compensation Clinic comes to us from the ANA Crowne Plaza Narita Airport where I had quite a bad experience last week, especially with the quality of the mattresses.

When staying at the Narita Airport area I usually select the Hilton but unfortunately it has been sold out the entire week and I had the choice of staying at a local chain property for an amazing rate of ~ $30 (which in hindsight I should have done) or to book the ANA Crowne Plaza at about triple the price but with a 2pm late check-out instead of 11am.

I arrived at Narita Airport at 9:15pm after taking the last Narita Express from Tokyo and took the shuttle bus from Terminal 2 to the hotel. As it turned out the Crowne Plaza shares the shuttle bus with the Narita View Hotel that is located far away, right behind the Hilton. In fact the Hilton used to share the bus with them but stopped doing so after frequent complaints by the guests. Not sure if a hotel that charges 2-3x the rate of competing local properties should still share a bus with them and can’t afford their own. The ride could take 10 min from Terminal 2 but takes 25 after going to the Narita View first.

After arriving at the hotel it turned out that I was allocated a Twin Bed room as a supposed ‘Upgrade’. I had reserved a simple Single Bed room before and was now given a Twin Deluxe. Not sure what was Deluxe on this room though – if the originally booked room was even worse then well… 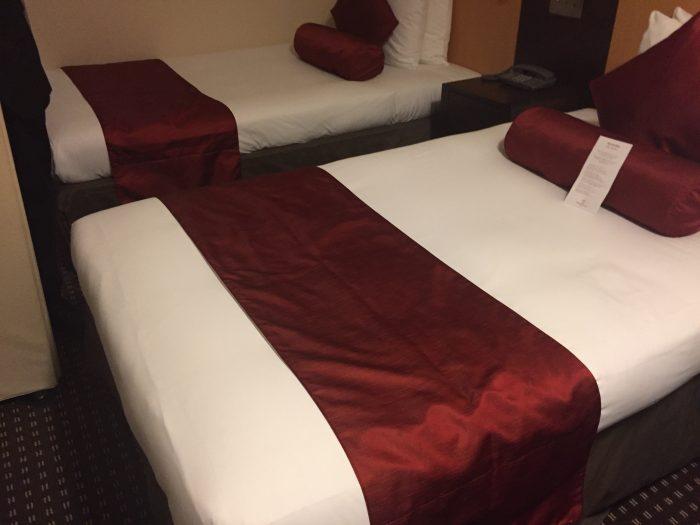 The issue however was not just that all of a sudden I had two beds which really isn’t a big drama but that the mattresses are pretty much rubbish. Even after just sitting on the bed I felt how i sank in and felt the box spring underneath. This might not be a big issue for someone weighing about 50kg but I’d imagine the average western traveler weihs quite a bit more than that (myself roughly 84kg).

I had this experience before at the Crowne Plaza Kobe in April resulting in severe back pain for three days following that stay. I was certain to not do that again and went to the front desk to ask for a different room/bed type, even if it’s a roll away bed. This whole effort turned out to be a 1.5hr exercise until everything was said and done. At 11:30pm it was impossible to get a taxi to go to another hotel as I could see another party of 3 people waiting over half an hour for a cab already.

The In Room Dining was also cut down to 6 items after 11pm – in my opinion insufficient for an airport hotel where the last shuttle bus arrives at 11:30pm.

Eventually I was given a room with one King Size where the mattress was slightly better though not ideal.

At around 2am I heard the noise of an envelope being pushed underneath the door. It contained the following letter:

Essentially the hotel offered to waive the overnight charge and also add a breakfast benefit which is certainly a very generous compensation especially since I didn’t even request any at this point.

What I did however is request to pay 1000 JPY for the Room (instead the original 9000) so that the IHG Reward Club account will be hit with a qualifying activity for the Accelerate and Book Direct Promotion. All in all this should eventually net in ~ 15,000 IHG Rewards points.

Apart from the Pillow Menu which the ANA Crowne Plaza Narita has I feel that it makes no sense for a chain hotel to not have an adequate brand standard when it comes to mattresses. Both the Narita property and the one in Kobe two months ago had horrible mattresses while the Crowne Plaza Los Angeles Airport for example has very good ones.

On top of it all the other things mentioned are out of whack as well. I really don’t like ‘Upgrades’ that change your bed type without consulting you first. Also In Room Dining at an airport hotel is an important feature and the items offered didn’t even include standard dishes such as a Club Sandwich, Beef Burger or a Pasta Dish. The only standard item was a Caesars Salad and that’s simply not enough.

Earlier in the week, we covered a reader's case where a Holiday Inn Express hotel had added an undisclosed Covid-19 related surcharge. We have...