Animal welfare groups have again risen awareness to the ongoing slaughter of dogs and trade of dog meat on the holiday island of Bali where the product is often sold to unsuspecting people as satay. 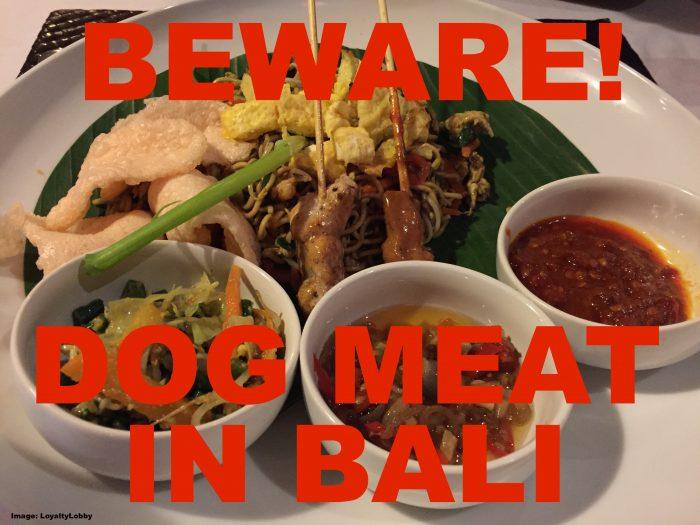 A horrifying prospect that nobody really wants to think of when a Bali holiday comes to mind as most cultures consider the slaughter of dogs as barberism and would never in their wildest dreams think of consuming dog meat.

The story has been picked up by reputable news outlets in the past week but it’s by far not the first time that someone reports on it, though the possibility of holidaymakers consuming the meat while thinking they’re eating chicken satay is terrifying.

One of these reports can be followed at The Independent (access here).

Bali is a popular destination for Western and Australian tourists. Attracting both budget backpackers and luxury honeymooners, it’s the most developed Indonesian island.

But according to a new report, visitors to the island are being duped and unknowingly eating dog meat that they think is chicken.

They found that every day, dogs – including pets – are being taken off the streets of Bali and killed, often brutally, to be sold as meat to tourists. …

It’s reportedly street food vendors who are most likely to be selling dog meat as chicken, but about 70 restaurants in Bali have been found to sell dog meat too.

Often it’s sold with the word “satay,” and the sellers allow tourists to presume it’s chicken.

“Tourists will walk down a street, they’ll see a street store selling satay but what they are not realising is the letters RW on the store mean it is dog meat being served,” Animals Australia campaign director Lyn White told the ABC.

This can simply be summarized with one word and that would be: Disgusting!

I have contacted a friend in Indonesia to learn more about this and was told that it indeed legal to sell dog meat there. What’s important to avoid it is the designation of such meat which is very encrypted and not recognizable to foreigners due to local slang.

The article already mentions the letters “RW”:. There are others such as “B1” or “lomok2”.

I have seen strange meat options sold for consumption all over the world. Donkey, Raindeer, Guinea Pig, Snake etc. It comes to no surprise to me that indeed some cultures do eat dog and even though many societies consider dogs to be a domesticated animal in other parts of the world they eat them.

I honestly wouldn’t have expected Bali of all places to be a dog meat hub. This is disturbing and sickening at the same time. While I never entirely trust one sided reports from environmental or animal rights groups entirely, if even half of what is being reported by them is true that’s more than enough reason to be careful on your next Bali holiday and pay close attention to the signage at vendors.