The A380, the iconic plane by Airbus, was poised to be a success when it was launched back in 2001, but lately the number of aircrafts ordered has stalled, mostly due to airline concerns about fuel efficiency and overall operating cost. There were even rumors the A380 program would come to an end.

This week during the Paris Air Show, Airbus introduced a development study on a new, more efficient version of their double-decker, the “A380plus”. With this new version of the aircraft (offered also as an upgrade pack for existing planes), Airbus offers up to a 13% cost reduction per seat vs the current A380, clearly on an effort to re-launch sales.

“The A380plus is an efficient way to offer even better economics and improved operational performance at the same time.” He also adds: “It is a new step for our iconic aircraft to best serve worldwide fast-growing traffic and the evolving needs of the A380 customers. The A380 is well-proven as the solution to increasing congestion at large airports, and in offering a unique, passenger-preferred experience. ”

The A380plus promises improvements in three key factors: aerodynamics, maintenance optimization, and passenger capacity. An aircraft configured with all the proposed enhancements could obtain up to 4% reduction in fuel consumption, increase passenger capacity by 80 seats and reduce cost per seat by 13%. 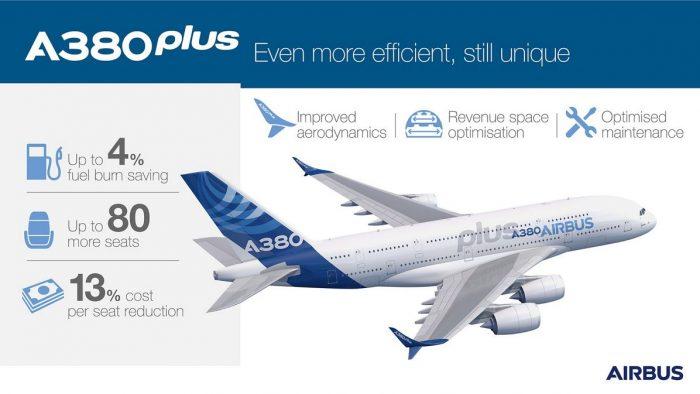 Frank Vermaire, A380 Marketing head, is quoted in an article on Aviation Week (access here) discussing the aerodynamics and maintenance optimization enhancements proposed for the new aircraft:

The winglets will be 4.7 m (15 ft.) high. Airbus installed mockups on the MSN04 test aircraft displayed in Le Bourget, but the actual devices have not yet been built nor has a supplier been picked. Wing changes also include upper-belly fairing improvements and wing-camber modifications increasing height by 33 mm (1.3 in.) between Rib 10 and Rib 30. The wing will also be slightly retwisted. “We have a better understanding of wing aerodynamics,” Vermeire said. The wing changes are now being looked at “mainly as a line fit,” he said, and Airbus is looking at the option of retrofitting winglets at a later stage.

Vermeire dismissed the option of a reengining that Airbus studied earlier as part of the A380neo proposal. Airbus Commercial Aircraft President Fabrice Bregier said earlier this month there was “no business case” for the A380neo.

Airbus also decided to pick up some technologies developed for the A350 and put them back into the A380. That applies to the inflight entertainment system, the flight management system (FMS) and the fuel pumps. Vermeire said the upgrade will reduce weight and improve reliability. The later-technology FMS will also help reduce fuel burn, he stressed.

Airbus also feels comfortable with stretching maintenance intervals for light and base maintenance. In the future, light checks will be required after 1,000 hr., compared to the current 750 hr. Downtime at heavy checks will also be reduced. Airbus says that the maintenance changes overall will allow airlines to keep the aircraft flying for an additional six days per year.

The third “enhancement” proposed by the European manufacturer (and please think of Dr. Evil air-quoting “enhancements” from now on) is up to 80 passengers more inside the aircraft, going, for example, from 497 to 575 passengers on a four-class configuration.

These extra 80 passengers are obtained by two ways: cabin modifications and passenger densification. Airbus includes a description of the “cabin enablers” (think of Dr. Evil again) on their press release:

The NFS involves relocation of the forward stair from Door 1 to Door 2, and combining the entrance of the NFS to the upper deck (going up), with the adjacent staircase to the lower-deck crew-rest (going down). The NFS would make room for up to 20 additional passengers.

For the CCRC, the existing flight-crew-rest (behind the cockpit in the mezzanine area at Door 1) is moved down and combined with the cabin crew rest on the lower deck. This innovation frees space for three extra Premium-Economy passengers at the front of the main-deck.

Thanks to an innovative seating concept developed by Airbus and its seating partners, Airbus is able to maintain an 18inch seat-width while offering airlines an 11-abreast Economy Class on the main-deck in a ‘3-5-3’ configuration. This enables an increase in capacity of 23 seats – adding significantly to the A380’s revenue-generating potential.

The AGSM involves the redesign of the rear-stair from a spiral configuration to a straight/square one. On the main-deck, this allows valuable storage volume for galley modules. Overall the AGSM provides space for 14 more revenue passengers plus two extra food trolleys.

The option to remove the sidewall stowages on the upper-deck increases the wall-to-wall cabin width at foot-rest height – which makes space for up to 10 more business class seats / beds when an angled herring-bone arrangement is used.

The A380’s generous main-deck cross section – significantly wider than any other commercial airliner – is allowing seat manufacturers to optimise their Premium Economy (PE) seat designs to create the industry’s most efficient and comfortable PE layout possible. This layout enables 11 more PE seats than in an eight-abreast layout.

Airbus has been pushing for an 11-abreast layout on their A30 for a long time now as a way to make the aircraft more attractive to airlines; it was already on the plans of the now extinct A380neo.

The question that remains is who will be the first airline to implement an 11-across seating in Economy. I think that for many people, a 10-across is a psychological barrier better remain unbroken, and there would probably be some backlash in terms of public relations for the pioneers of the sardines-in-a-tin `seating style.

How much would they have to pay you to fly on the middle seat of the central 5 seats in the Economy cabin?