Most Hotel Loyalty Programs have the rule that a room can be booked as award as long as a Standard Room is available but sometimes hotels don’t even open up such rooms when their entire remaining inventory is still available that evening. 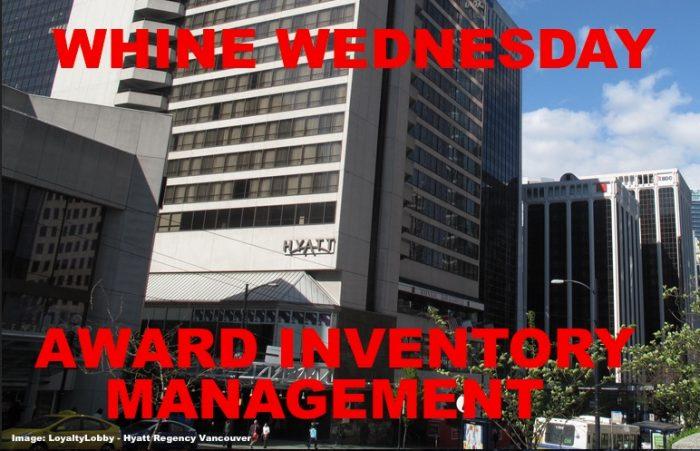 It rarely makes sense to leave inventory open and unsold unless you talk about specialty rooms that are needed early in the next day for early arrivals.

I experienced one such case at the Hyatt Regency Vancouver this week where I had a 2 night reservation (on a cash & points rate) and was looking to extend for 1 or 2 additional nights on whatever award was available.

The hotel was sold out for Standard King / Standard Twin on Monday night at the time I made my initial booking and fair enough the hotel attempts to sell higher room types at a premium price which is what each business is trying to do in order to maximize revenue.

When It came to the actual day however the availability still hadn’t changed. All room types were available to book except the two standard types that would make it possible to book an award.

I checked with in house reservations just before I left to a nearby Starwood property (really no shortage of hotels in Vancouver) and the clear answer was there wouldn’t be any Standard Rooms opened up that day.

Again, fair enough let them do whatever they want. Just for fun I set myself an alert for 11:58pm to see what rooms are available for sale that night displayed on the Hyatt App.

it reflected the following results: 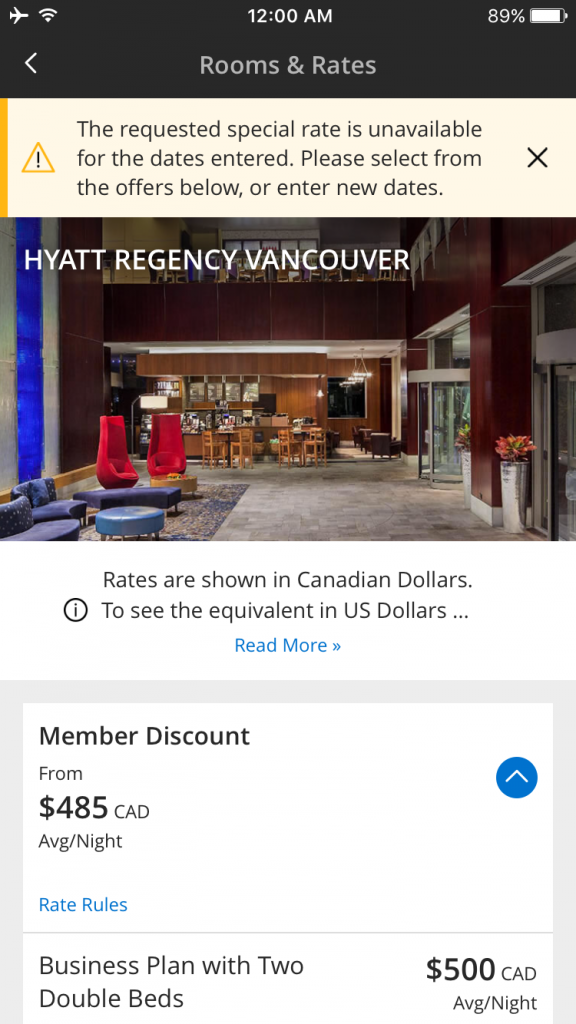 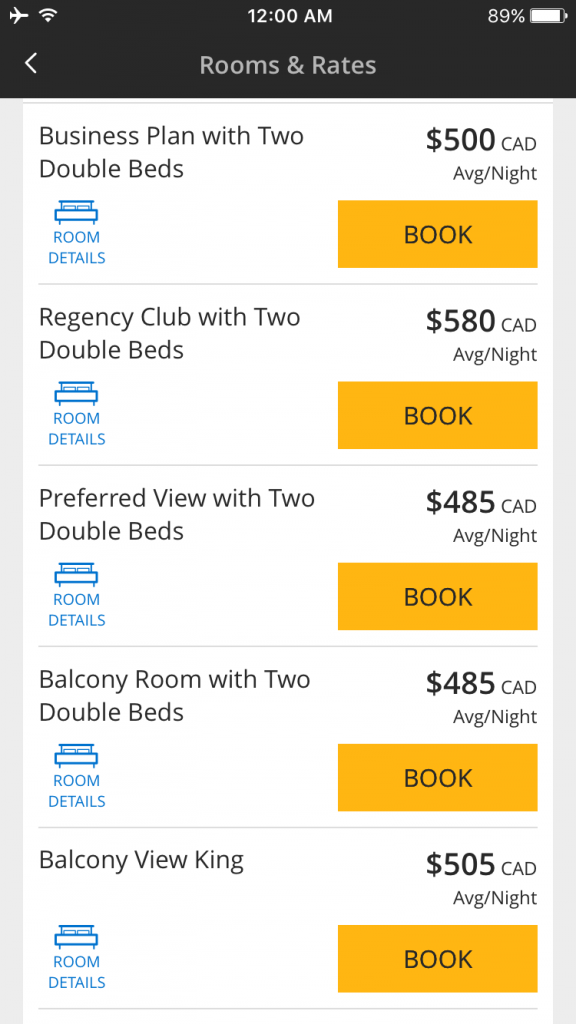 Nobody was really able to tell me what the ‘Business Plan with Two Double Beds’ actually is and how it differs room wise from a regular double room. Nevertheless what it clearly shows is that at least a Double Bed room and a Balcony View King for sale.

Displaying a range of rooms like this doesn’t mean the hotel have six rooms available, could be just two really as the ‘Two Double Beds’ could be classified as either and Regency Club basically just means Club Access.

What I’m trying to get at here is that the hotel gambled to sell these rooms until the very last minute and lost while would they have opened up a room that I could book on full points the reimbursement from Hyatt Gold Passport for that room would be about Average Daily Rate (ADR) based on the very high occupancy last Monday. So it would have been a guaranteed full reimbursement instead of a gamble and forcing the guest to move to another property that night where I paid ~ CAD$ 300).

Hyatt Hotels receive a full ADR reimbursement whenever the occupancy is 93% or higher.

Talking to the revenue manager today he only reply to the question of how this makes sense was that she doesn’t comment on how she sells her rooms. Alright then, no loss there for obvious reasons.

It makes sense for hotels to capacity control their award nights and to make sure the oversell of the overall number of rooms available doesn’t get out of hand. I have no understanding for situations when a hotel can obviously not sell anymore of their inventory yet still refuses to make reward nights available. Especially when a high reimbursement from the loyalty side of the company is guaranteed.