Seems that the Marriott CEO Mr. Sorensen doesn’t think too highly about the SPG program members based on his thoughts publicly shared on recent forum in the New York City. 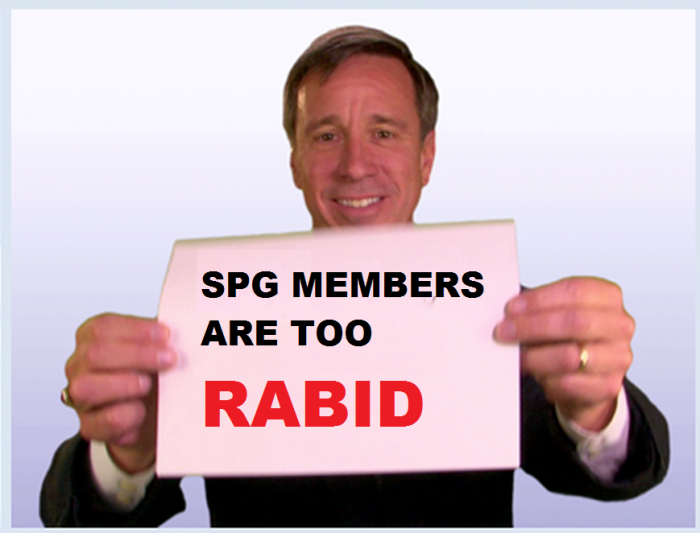 Mr. Sorensen described SPG members as “rabid”. Quick look at the thesaurus gives such a synonyms as angry and maniacal that correctly describes the feelings of many SPG members when Marriott took over the company (and in their thoughts will eventually destroy the program).

Here’s an excerpt from HotelNewsNow (access the piece here):

Sorenson was quick to describe the effort to absorb Starwood Hotels & Resorts Worldwide as “a huge amount of work,” while also noting it’s gone fabulously well.

He said one thing that caught him off guard about the acquisition and transition has been how deep the devotion ran for Starwood Preferred Guest loyalists.

“Early on, the thing I didn’t appreciate that I should have was how rabid the SPG elites were about the program,” he said. “Maybe that shouldn’t have been that surprising.”

I have written about the enthusiasm gap between the Marriott Rewards and Starwood Preferred Guest (SPG) program many times in the past.

Try finding a person that has strong feelings about Marriott Rewards. It is a solid albeit dull program that has been running on an autopilot for the better part of the 21st century.

Then survey some SPG elite members and what is their perception. Difference is like a night and day. They really feel (rightly or wrongly) far more attached to the program. SPG marketing has also been light years ahead of Marriott’s.

Perhaps Mr. Sorensen could have chosen some other word to describe his feelings towards SPG members?

Marriott Rewards really should spice up their marketing and communication efforts to make it modern (website update wouldn’t hurt either).

Reader Question: How to use the $100/$200 American Express Airline Credit (U.S. Based Gold/Platinum Charge Cards)