British Airways is having yet another strike with its Mixed Fleet cabin crew between July 1 – 16, 2017, which the airline would not prefer paying a living wage.

Now, British Airways has applied for an exception from CAA to wet lease nine Airbus A320 aircraft with crews (both cockpit and cabin) from Qatar Airways for two month period including July 1 – 16, 2017, stating extraordinary circumstances.

Here’s the info from CAA:

Remember that you can sen in your comments too! 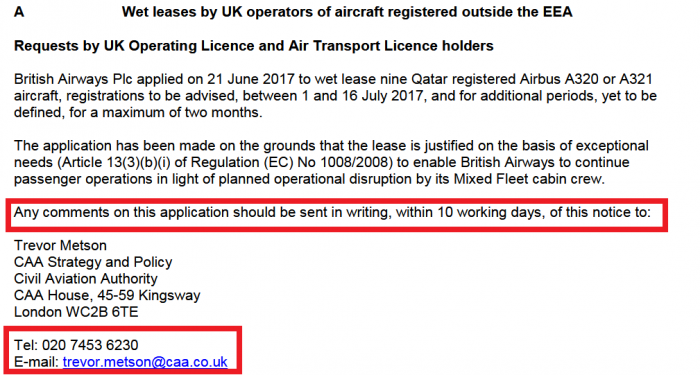 You have to remember that Qatar Airways currently owns 20% stake in IAG (parent of British Airways, Iberia, Aer Lingus and Vueling) and is having is own issues with blockage within Gulf States (much idle capacity as a result).

Qatar Airways has plenty of crew from Eastern Europe (very few from Western countries due to harsh work and living conditions both in Qatar and during trips) that have right to work in the UK and could thus operate on these flights. Not sure if same applies for the cockpit, however.

Why on earth British Airways has such a difficulty resolving this issue with one of their five or so cabin crew unions? Paying a fair living wage and having happy cabin crew that like to do their job is a recipe for a success in the long them (if that is something that BA bosses even care – long term success of the airline).