A LoyaltyLobby reader sent me an email about redeeming Singapore Airlines KrisFlyer miles for mixed class award from Hong Kong to Perth.

I have a problem with a Krisflyer booking & I’m hoping you can offer some thoughts.

I am trying to book a one way first class Krisflyer award from Hong Kong to Perth (via Singapore).

There is no first class on the Singapore – Perth sector so I understand that will be in Business.

I’m sure I’ve read previously that you can’t do a mixed class booking online, so you need to call.

The problem is that when I call they said their system doesn’t allow a mixed class booking so I have to pay the points needed for two separate sectors (i.e. HKG-SIN & SIN-PER).

This works out to almost double the first class points quoted HKG-PER!

I’ve previously booked a mixed business/economy class on AirNZ using Krisflyer points & the Krisflyer call centre but perhaps with was a different airline policy or perhaps it was because they did have a business class cabin just no award seats on that sector.

I asked him if I could speak to a manager & he said he would place a hold on our flights & escalate to upper management for a decision.

They just called back & said they have refused so I would need to pay the separate points for each sector.

The email for our held flights even have both sectors on the one ticket!

It seem ludicrous that I have to pay double the points for a mixed first/business compared to first class all the way just because one sector doesn’t have a first class cabin!

I would appreciate your thoughts on if this is really the case & if there is some way around this.

KrisFlyer publishes mileage requirement for travel between Hong Kong and Perth in all access of service including first. 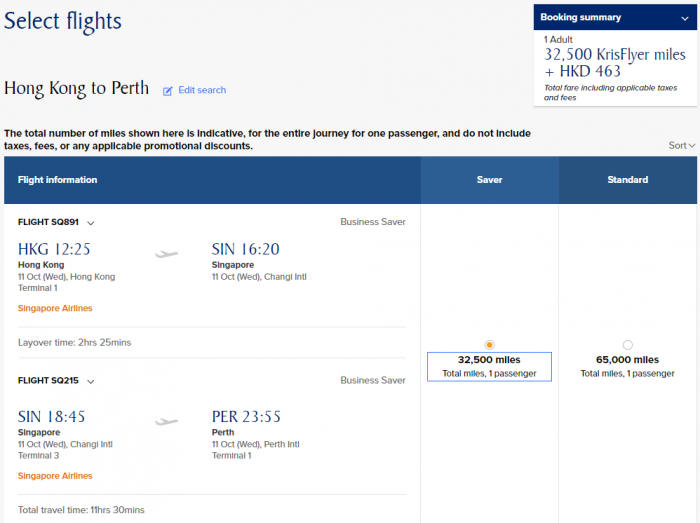 The online interface has no issues pricing Hong Kong to Perth in business class for the 32,500 KrisFlyer miles (good use of miles) and the price for the same award in first class should be15,000 miles more, although only the Hong Kong to Singapore segment would be in first class.

I am bit surprised that KrisFlyer is not willing to issue this as a mixed award. I have found the people answering the calls to be quite reasonable, although often saying no first.

2. You are willing to accept downgrade to business class on the SIN-PER segment.

End of story. Escalate until you get to a supervisor who pushes the ticket through.

Not sure why the reader has such an issue for getting Singapore Airlines to issue the ticket using KrisFlyer miles? The routing is valid and they are willing to accept downgrade for the second segment where first class is not available.

I have previously issued an award ticket where the second segment was in economy (got it later upped to business) due to no biz availability at the time of ticketing.