Back in November 2016 we featured a review about ChatSIM, a service that allows you to use the instant messenger texting service of your choice worldwide for as little as $20.00 per year – it’s time for an update!

In the past few months we received a couple reader emails after they had problems with the service and I have also had some issues with them including a recent email that my data use was ‘abnormal’.

There were relatively few issues during the first few months of using this card and in fact I was pretty satisfied with how it worked. Then the reception became spotty and I often wasn’t able to properly connect for hours at locations where it worked very well previously.

If you like to read up on the review from last year see our article here.

To quickly recapitulate here is why I decided to try this service:

… If you live or visit Asia a lot you might know that it’s almost impossible to stay away from WeChat, LINE and Kakao but Facebook Messenger and WhatsApp are two services that are worldwide mainstream.

Before I ordered this product I was skeptical especially because it wasn’t exactly cheap. There used to be a basic fee of 15$ plus the annual fee of 15$ plus shipping (another 5$). Then back in early September I came about a promo code to waive the base fee and said ‘why not’ let’s try it!

So long story short, I used the card and a few months in me and others started to get the first emails that the data use was exceeding the allowed limit even though we (at least in my case) simply used the chat apps that were designated by the company. They then downgraded the speed.

Of course everybody who has a cellphone knows that there are always apps running in the background and try to use data. Yes, you can shut that off but I won’t go through each app and disable it because I’m not on Wifi for an hour. It seems ChatSIM has simply no way to limit the data use exclusively to the apps they advertise.

Even though slow I’ve been using it again these past few weeks and sure enough this morning I got the following email: 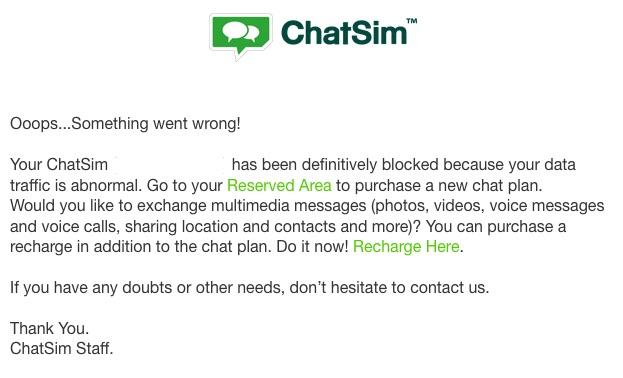 I have a problem with this sort of ‘customer service’ for a variety of reasons. For one, when you order the card it doesn’t give any instructions that you have to completely reconfigure your phone every time you use ChatSim. The website also did not make any mention about ‘excessive data use’ and that they would disable your card etc.

Plain terms & conditions were simply missing back then (not sure if they have added them in the meanwhile or if any come in printed form with new packages that are sent out).

Of course it will cost them quite a bit of money if customers are using large amounts of data and at the same time not purchasing their expensive Multimedia credits but that’s not really the customers problem.

Also one should note that none of the other apps ever worked while using ChatSim. Whatever Data they are talking about clearly didn’t benefit the user in any way. Occasionally images that chat partners sent me on Facebook messenger got through, that might explain extra data use but again, not my problem if this kind of thing shouldn’t work with the product in the first place.

Or maybe it’s all just a hoax to get rid of customers who don’t buy additional packages – who knows.

There is simply no way anymore to recommend this ChatSim product in good faith because I think the company is dishonest in describing what they are providing and how the customer is supposed to use the product. It would be fine if they were completely upfront about it.

I replied to the company that if they wish to deactivate the card they can gladly do so but in which case I expect a refund for the product. So far there isn’t any reply (no surprise there). 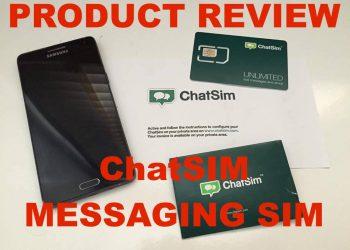 Today we have a LoyaltyLobby product review about ChatSIM, a service that allows you to use the instant messenger texting...