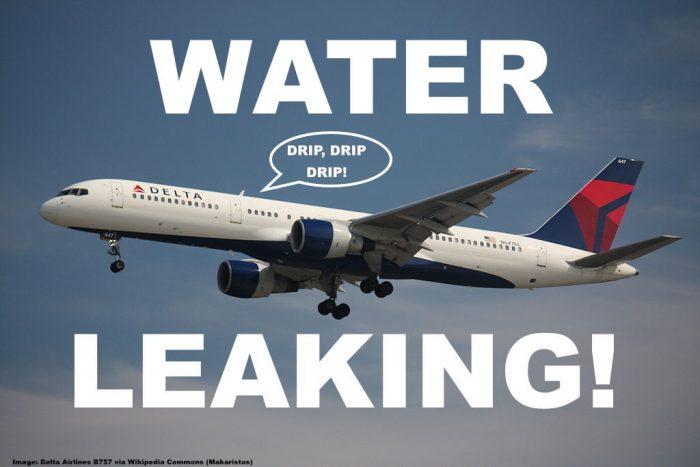 Half a dozen Delta passengers from Atlanta to Ft. Myers, FL already experienced this new premium service which was largely ignored by the flight attendants.

One of the characteristics a premium airline such as Delta comes with is how fast and efficient the crew deals with special treatment such as this – or to ignore it entirely such as in this case.

A plane passenger sat helplessly in his seat as water steadily trickled onto him from the ceiling during a flight to Florida Friday, despite his best efforts to shield himself using a magazine, video shows.

The soaked but apparently good-natured passenger chuckled as he fruitlessly tried to divert the liquid away from his body using the magazine, video posted by his son shows. …

McCullough told NBC 4 New York his family was flying from Atlanta on the Delta flight when the ceiling started leaking. He said at least a half-dozen people were soaked by flight’s end.

Flight attendants didn’t address the leak until the flight was in its final descent, McCullough said: “They eventually realized how stupid the situation was and just stuffed napkins into the ceiling.”

A corresponding video on Youtube shows one of the passengers trying to divert the water away from him. With more or less success.

After tweeting to Delta their customer service replied that they would look into the case and reportedly also offered a voucher to the passenger.

It’s unclear when flight attendants were alerted to the matter and how full the flight was. Based on these factors it might be hard for the cabin crew to fix the leak or re-accommodate the affected passengers. On the other hand I don’t find it very hard to believe that the crew simply didn’t care about the matter and left the passengers to fend for themselves.

It’s rather funny and tragic at the same time that Delta and other U.S. airlines have constant maintenance and service issues while on the other hand rallying against overseas carriers who offer a more premium passenger experience such as in Delta’s most recent propaganda video (see John’s article here).