Passengers on budget carrier Scoot flying from Bangkok to Singapore were in for a long layover at the airport after their flight was delayed by roughly 22 hours while customers received minimal care and information. 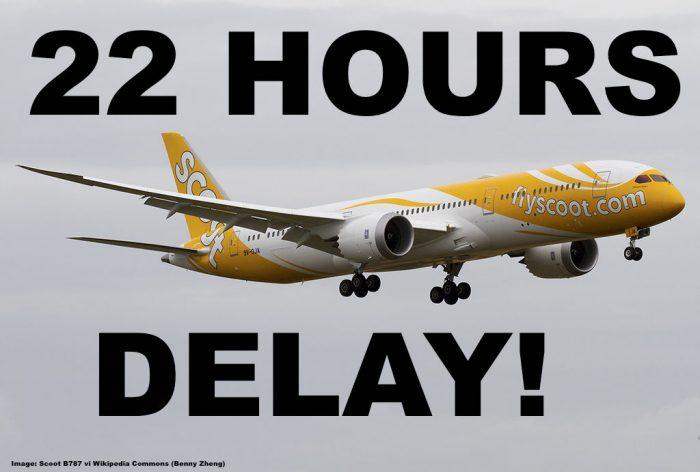 Scoot Flight TZ297 to Singapore was originally scheduled to depart at 10.55pm local time on Friday, but ended up departing 9:03 pm the last night (Saturday).

Scoot operates various routes from Bangkok Don Mueang airport to destinations such as Osaka, Tokyo, Taipei and Singapore (among others). In fact the affected flight TZ297 is being sold as a continuation flight Osaka-Bangkok-Singapore.

There is a corresponding story at the Straits Times (access here) from which you can read some excerpts below.

Passengers on a Scoot flight from Bangkok to Singapore waited for nearly a day after the flight was cancelled due to an issue with the aircraft’s air-conditioning and pressurisation system.

He [a passenger named Lim] said they were updated about the delays in half-hour intervals and claimed the airline did not announce the cancellation of the flight for several hours.

This dragged on until 4am before the passengers were “dispersed discreetly”, said the 35-year-old who is self-employed. He estimated that there were about 50 Singaporeans on the flight, along with Thai nationals and people from other nationalities. …

In the end, frustrated at the lack of information and wanting to go home, Mr Lim and his wife booked their own Singapore Airlines flights and cancelled their Scoot flight. Their new flights cost more than $600 for two people, while their discounted Scoot flights had cost about $300 for both of them.

However, the other passengers waited until 8pm on Saturday, 21 hours after their original departure time, before they could take a flight to Singapore. …

A Scoot spokesman told ST that there was an issue with the aircraft’s air-conditioning and pressurisation system.

“As a result, the aircraft was grounded in Bangkok for further troubleshooting,” she said. “Troubleshooting of the defective system has been completed and the defect isolated. Accordingly, the flight was rescheduled to 8pm Bangkok time (9pm Singapore time) on July 1.”

She said guests were provided food and water, as well as hotel accommodation, in the meantime.

There are several issues with this case. For one I think that it’s always recommended to have a proper travel insurance which can be purchased either for single trips, on an annual policy for frequent travelers who travel multiple times per year. There are also several credit card products that come with a travel insurance as long as the trip is paid for with the respective card.

Most passengers flying budget airlines are leisure travelers and likely inexperienced when it comes to how to deal with such a delay. This case appears to have been the result of a maintenance delay which is unfortunately for everybody involved but leaves airline ground staff with little to nothing in terms of options except trying to repair it or cancel the flight if the repair efforts are futile (as in this case).

Meanwhile passengers vented their frustration toward Scoot on social media such as on the companies Facebook page (see here).

The response Scoot has is rather formal and sparse: 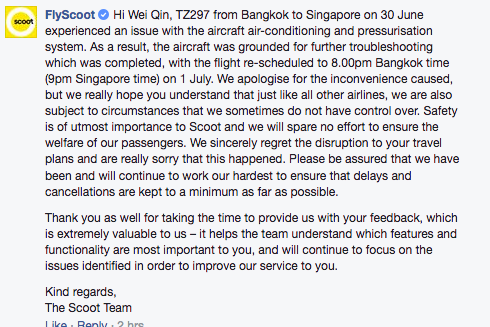 I think that in a case of a delay that is almost an entire day the company should offer more than a plain apology and promise passengers compensation or a refund of their fare.

There are little to no passenger rights for departures ex Thailand that would mandate a specific treatment or compensation of passengers by the budget carrier. In jurisdictions such as the EU passengers would be entitled to a lump sum of money as well as covered by the airlines ‘duty of care’ which admittedly Scoot provided here at least in part (passengers received a hotel).

From the report it seems Scoot provided passengers with hotels which is more than budget airlines in other parts of the world would provide. The airline has very unfortunate departure times ex Bangkok which is why I was never tempted to try them so far even though there were sometimes very good deals out there (another reason being that I don’t like the facilities and location of Don Mueang Airport).

I think the solution that the couple ended up with, purchasing alternate tickets and getting home is the most efficient and sensible if one has the means to do it and the chance of getting the expenses reimbursed through an insurance. I understand though that not everybody has that option, especially if you purchase the ticket on a budget carrier to save money.

Rebooking passengers to other airlines might also be difficult due to the factors I mentioned: Departure time and location of the airport. DMK airport only has Scoot and Air Asia that could have transported the passengers to Singapore. Jetstar and Tigerair depart from the main airport Suvarnahhumi BKK. In any case it requires an interline agreement to rebook passengers to other carriers and I’m not certain that one exists in most cases.

Let’s hope Scoot will eventually provide some sort of compensation to the passengers. Those who missed their international connections in Singapore might have been in a real bind.

Bad things happen from time to time and it’s important to know how to deal with them. Being prepared is the best option against any eventualities and that includes to limit ones expectation when it comes to traveling on budget airlines. The care passengers receive is simply not on par with the mainline carriers.

That being said I also experienced this 30 Minute Salami sliced delay tactic with large international carriers. Set yourself a limit and after a couple hours just pull the plug, abort the trip and look for a hotel. Then come back next day after dealing with the issue from the comfort of a hotel room with WiFi and a Telephone. Last but not least: Be insured and maybe travel with means that allow for a reasonable solution to your problems.

No Frills of the Day: Scoot Osaka to Honolulu from $165 (Round Trip)