As Britney Spears is going on her South East Asia tour her fans including various flight crew are going crazy and produced cover videos of her old song ‘Toxic’ inside their airplane cabins. 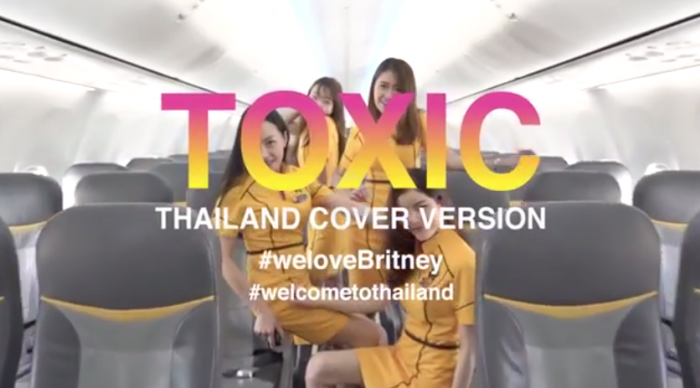 To my surprise I found out that Britney Spears is still very popular in Asia and the concerts are pretty much sold out as I learned after looking through Google a little bit.

The videos on Youtube have racked up more than a million views so far and there are probably even more coming.

Here is the NOK Air version:

They did a pretty good job with the video editing.

The video was likely inspired by the first version starring an Air Asia steward uploaded a couple months ago:

His boss Tony Fernandes took the opportunity and supported it through his social media accounts:

There are a couple more budget airlines in South East Asia so maybe we’ll see another version from Scoot, Tiger Air or Thai Smile… who knows?

Good for the crew to have some fun and the company to support these videos which also gives them complimentary exposure on social media once the clips went viral.

It would otherwise cost the company quite a bit of money to run a completely professional advertisement campaign like that even though I wonder if the NOK Air clip was done completely without expert involvement as it appears quite professional. I’m sure the fact that the NOK version featured a couple of pretty flight attendants also helped them to get well over a million. Not complaining at all…