Crazy American Airlines Passenger And Her Dog On The Loose During Taxi, Booted Off The Plane!

An American Airlines passengers got into an argument with flight attendants prior to take off while she let let her dog run throughout the cabin and she refused to move her seat to the takeoff position. 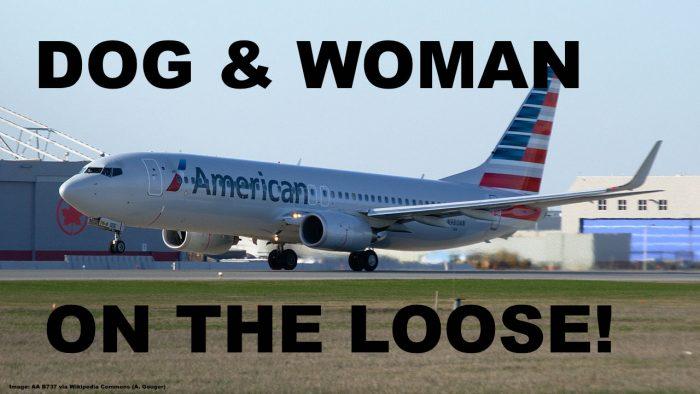 The woman then started to yell at the flight attendants which resulted in the plane returning to the terminal where she was booted off the aircraft.

Sometimes you can’t figure out what’s wrong with some people and in this case it probably comes at no surprise that an animal (likely an Emotional Support Animal – needed here?) was involved in escalating the situation, paired with the behavior of the passenger.

There was a report on ABC Chicago this morning (see here) highlighting what transpired there.

A disruptive passenger was removed from a flight from Atlanta to Chicago after she was caught on video yelling at a flight attendant while letting her dog run through the cabin.

Passengers on the plane at Hartsfield-Jackson Atlanta International Airport said the woman got angry when she was asked to place her seat in the upright position before take-off. She later threatened the flight attendant who was speaking to her, witnesses said.

The plane returned to the gate instead of taking off so security could get involved.

Video captured by passenger Michael Nash and posted to Facebook shows airport police and federal agents escorting the woman off the plane. Witnesses said they also questioned several passengers before they were allowed to take off. …

Here is a Youtube video where you can hear people screaming at the woman to ‘sit down’ and ‘you get us all killed’:

To sum the incident up in one word: Crazy!

Based on another report by the Chicago Sun Times (access here) the woman was actually rebooked onto another American Airlines flight after this incident.

With all the attention being given on security screening and taking water bottles away from people one can’t help but wonder if such mentally disturbed people aren’t a much greater security risk than someone with a can of soda. The reaction of the other passengers speaks volumes not just about an immediate threat but the concerns they having when witnessing such a scene.

American should have cancelled her ticket and ideally the passenger would find herself on the No Fly List to prevent further such incidents from happening. To accommodate her on another flight after she brought this whole thing on herself is overly generous.