Qatar Airways CEO, sometimes hot headed but always entertaining and outspoken, Akbar Al Baker made some not so nice comments about US based airlines and crews in an event held at the InterContinental hotel in Dublin that got recorded and uploaded to YouTube.

These comments are somewhat surprising because Qatar Airways is in the process of acquiring 4.75% stake in American Airlines (maximum it can purchase without the AA board’s approval) and would like to have it raised to 10%.

Akbar commented that the average age of HIS cabin crew is 26 years. If passengers choose to fly on American airlines from Ireland, they will be served by grannies.

At this point, I believe that he is doing a disservice to the airline and to the country that he represents. I do like that fact that he is a straight shooter and speaks out his mind, but he doesn’t seem realize when he crosses the line.

There are practically no employee protection in the Gulf Countries and Qatar Airways especially don’t treat their cabin crew very well (lot of restrictions what they can do). This is the reason why you find very few cabin crew members from western countries flying for the airline. The crews come mainly from Eastern Europe and Southeast Asia.

In western countries, the goal is to get people to work longer due to pension contributions (none in the Gulf) and longer life expectancy. I have no issues with experienced crew members as long as they do their job. 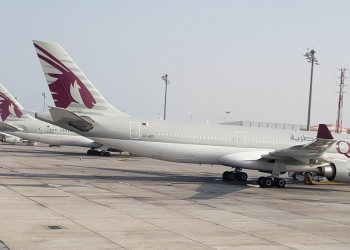 Qatar Airways has launched its Valentine's offer for 2023, up to 25% off the second ticket. The offer is valid...