New ‘Enhanced Security Measures’ for U.S. flights from origins worldwide are now in effect and airlines as well as airports are advising passengers to check in for their flight at least 2 hours prior to departure. 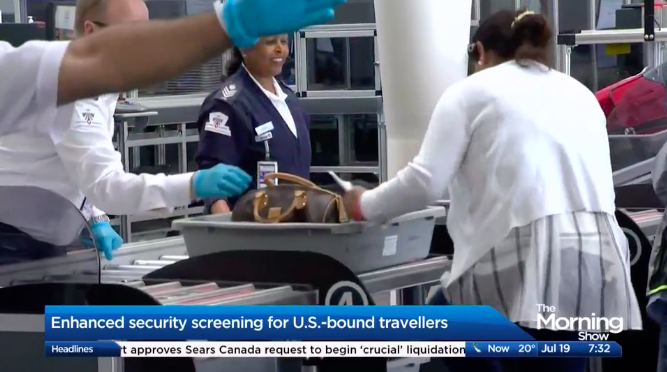 The advance check-in time is more likely being spent in a security check lineup where electronics are being specially screened so one could imagine the less devices one carries the faster it will be.

The U.S. Department of Homeland Security (DHS) officials have announced that a blanket laptop ban for all flights to the U.S. is off the table but that stricter security screening measures would be adopted instead.

This has been announced roughly 3 weeks ago (we wrote about it here) and the measure are now being implemented.

Flying to the United States may take a while longer as of today due to enhanced security measures affecting flights to the U.S.

Both Air Canada and WestJet are advising passengers to arrive at airports at least two hours prior to scheduled departures to allow for additional screening.

Air Canada says in an advisory that heightened security introduced by the U.S. Dept. of Homeland Security beginning today requires enhanced screening of personal electronic devices such as tablets and laptops.

In addition, all personal electronic devices larger than a smartphone will need to be easily accessible and have all cases and covers removed.

In Canada, flights to the U.S. usually depart through a special transborder facility with U.S. Immigration Preclearance so it’s easier for the airports to separate those passengers from the bulk of international departures to other countries.

Overseas carriers such as Lufthansa have advised their passengers that their security procedure at Duesseldorf, Frankfurt and Munich airport will take additional time as the U.S. requirements apply to all passengers departing from their terminals no matter where their final destination is going to be, even if they don’t fly to the U.S. at all.

All Intercontinental Lufthansa flights from these airports have therefore received updated check-in deadlines which for Premium Economy and Economy Class passengers is now 1 hour prior to departure and a generous 40 minutes for Business- and First Class guests (I would never risk showing up 40 min prior to departure at Frankfurt Airport but at least theoretically it’s possible per their policy). 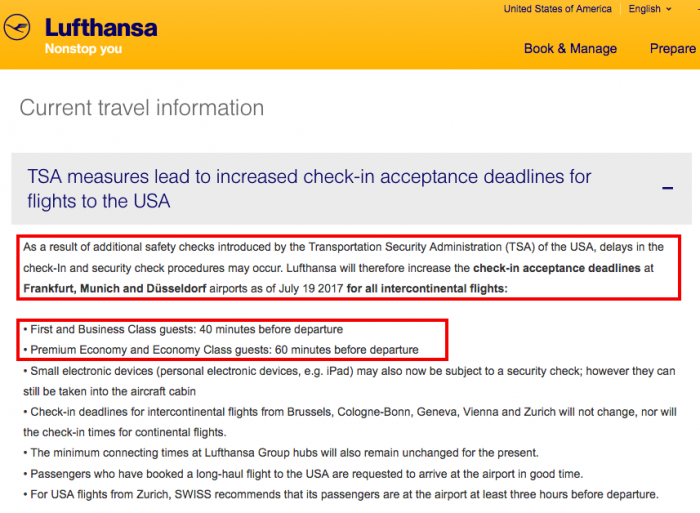 According to the referenced article above the following restrictions apply to the carry-on screening now:

Be sure to have all personal electronics charged as new measures allow screening of devices larger than a smartphone to be subject to further inspection.

– Ensure that protective cases and coverings can be easily removed or are removed from all electronic devices. The Canadian Air Transport Security Authority (CATSA) warns that any device that cannot be powered on or removed from cases will not be permitted to pass through the screening checkpoint.

– If you or your carry-on trigger an alarm, or happened to be selected at random, you may have to undergo further screening which could involve: Partial or full pat down of your person and carry-on; full-body scan and swabbing for explosive trace.

Travelers and airlines alike feared during the past months that the government would expand the restrictions to all flights going to the U.S. which would undoubtedly have lead to a slump in bookings, especially those of business travelers and people who simply aren’t comfortable of checking their electronics in.

As I mentioned in my previous article and the Lufthansa announcement unfortunately proved that this became true, passengers can now expect more security theater again at airports around the world and not only for U.S. bound flights but all departures since most airports have no way to separate a specific area of their terminals exclusively for U.S. departures.

This new solution seems to be a compromise to satisfy both ends of the involved parties to a degree that makes it possible to continue flights without imposing stricter limits.

I for one do not believe that more stringent checkpoint procedure are effective in whatever way, shape or form when it comes to deter serious threats by professional criminals and especially terrorists. On top of it all it’s laughable that the U.S. demanded these enhanced procedures to be carried out from overseas departure point while their own TSA still (per their latest self administered check) misses 95% of all prohibited items at security checkpoints.