A little over a month ago, I had the chance to take my 2nd longhaul flight on Finnair out of Helsinki (HEL) in business class. [Apologies for the delay in writing this up but I’ve been quite busy working on a big project for my “day job” for the last month or so!]

Finnair is the often-overlooked oneworld transatlantic carrier when it comes to travel between North America and Europe due to the somewhat remote geographic location of Helsinki (which is the 2nd northernmost world capital city after Reykjavik, Iceland).

However, with the recent expansion of Finnair’s service to Asia over the last few years, it has become one of the most convenient carriers for one-stop travel between North America and Europe to Asia, and the geographic location of Helsinki in this case works to its advantage.  For example, traveling westbound from New York to Beijing through LAX is almost 700 more miles than traveling eastbound via Helsinki. 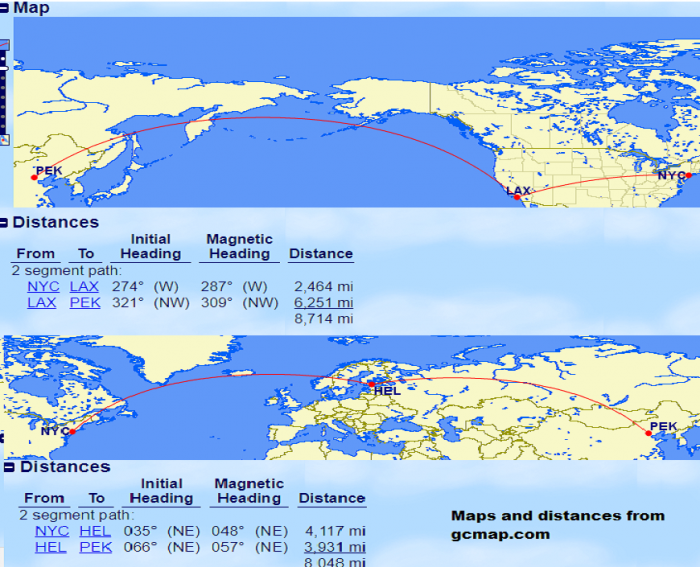 For me, I needed to book a return trip from Europe and found a “cheap” (under $1500) business class roundtrip fare originating in Switzerland which would net me about twice the equivalent qualifying dollars (EQDs) I needed toward my status qualification with American Airlines than what I paid for the ticket, meaning I could net out paying less than the $12,000 I normally would have to spend to requalify for Executive Platinum/oneworld Emerald status in 2018 than if I flew exclusively on AA-marketed flights. EQD earnings on partner airlines are based on a percentage of the distance flown instead of the cost of the ticket, and the percentages for premium fares are significantly higher than for economy fares. So cheap premium cabin tickets for longer flights is one of the “sweet spots” of the new AA frequent flyer program.

I had scheduled my itinerary so I could overnight in Helsinki on this trip (mostly because I’d already been to Switzerland and wasn’t really keen on spending more time there) and wanted to actually spend more than the 3-4 hours or so I spent in Finland the first time I was there.  So my flight from Geneva landed in Helsinki around 11pm, and I stayed at an airport hotel and my flight to New York left at 2:10pm the next day. When I got to Helsinki, I was amazed by how light it was outside still. The picture below was taken when we parked at the gate a few minutes before 11pm and you could still see some sunlight on the horizon even at the midpoint time between the official sunset and sunrise times (around 1:15 AM). 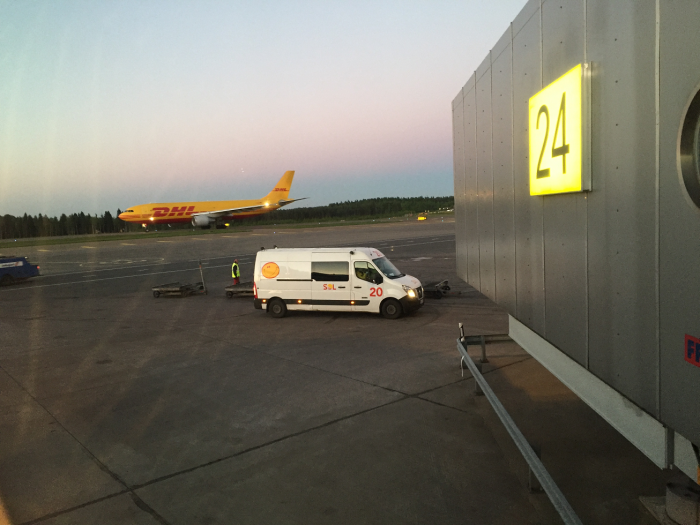 I returned to the airport the next day a little after 12 Noon, and proceeded to the Finnair check-in desk to print out my boarding pass (I always try to print out boarding passes for paid flights on airlines other than the one I’m earning miles on just in case they don’t post properly).

The airport was relatively empty at this time of day, and after I got my boarding pass, I proceeded upstairs to the “Premium” security area: 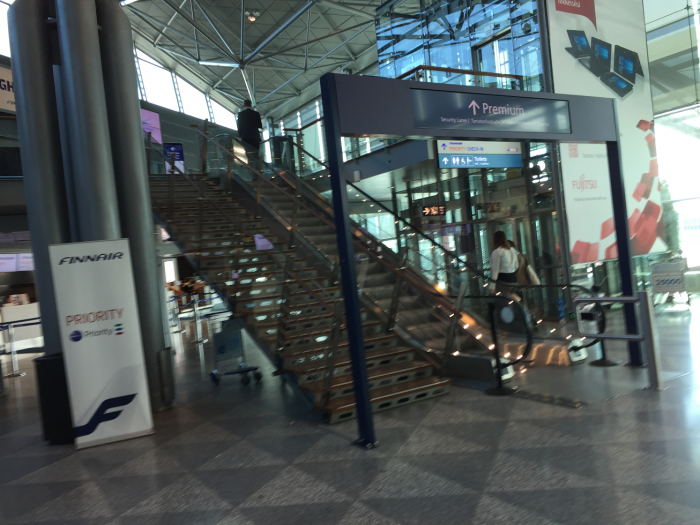 I was through security in about 30 seconds total, then proceeded to the Finnair lounge.  Like many European airports, you’re required to walk through the duty free shop to get to the lounge/gate area.

After passing through the duty free shop, it was a short walk to the Finnair Premium Lounge (Finnair has two lounges, a regular business class lounge for business and oneworld Sapphire passengers, and a Premium Lounge for oneworld Emerald flyers).  The Premium lounge is located to the left of the check-in counter: 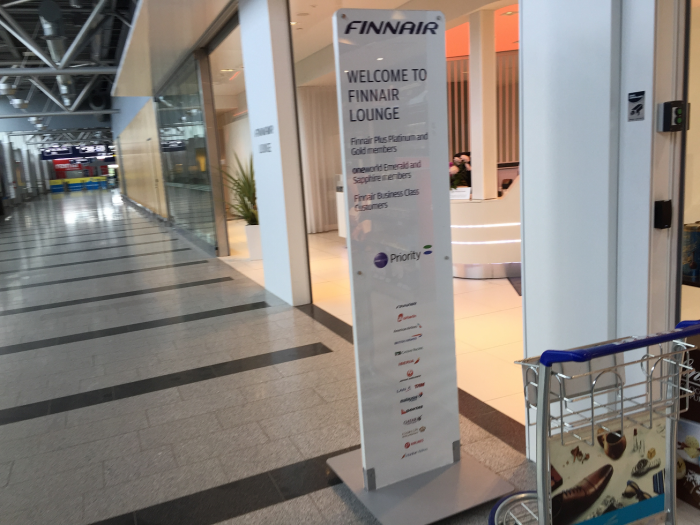 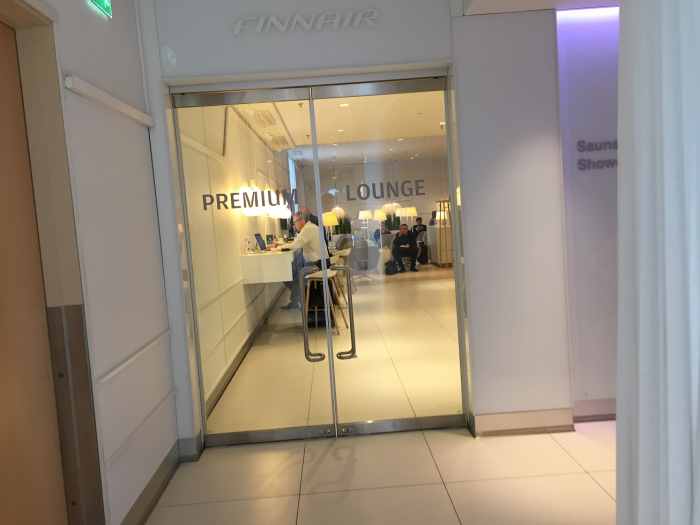 Once in the lounge, I made my way to the main seating area in the back. The style was very contemporary and everything fit well into the space available. In addition to the lamps you can see in the picture, the lounge also has some ambient lighting which can be changed to create a feeling of natural sunlight and to create an atmosphere to correlate with different times of the day (probably a good thing in a location where the sun hardly sets in summer and barely rises in winter).

The food in the lounge was definitely very Scandinavian, with lots of colorful fruits and berries, smoked meats including reindeer, salmon, herring, and other options, mostly cold items but a few hot entrees as well (chicken, roasted potatoes, etc.). Everything I tried tasted flavorful and fresh and the presentation was very structured as well. 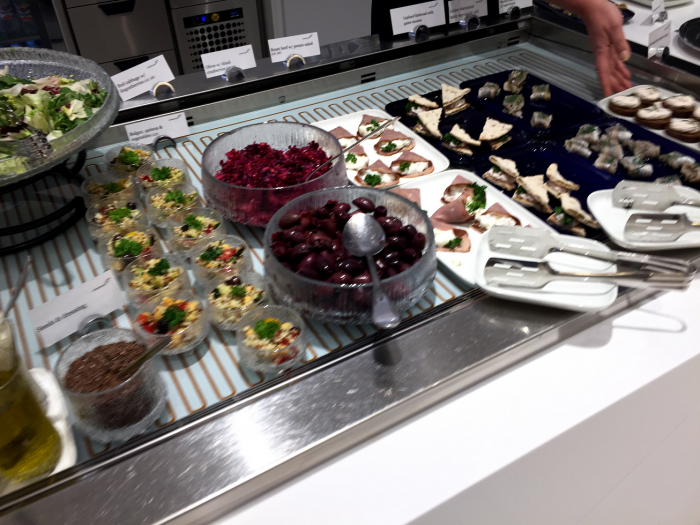 As for beverages, there was a self-service area at the left side of the buffet for champagne and wine. Other drinks could be ordered at the bar. They also had a list of regular and premium cocktails listed as well. I chose the Napue Gin and Tonic, which was served in Finnair’s traditional Ultima Thule glassware by Iittala which has been used since Finnair’s first transatlantic flight from Helsinki to New York in 1969. The design is supposed to resemble melting ice in Finland’s northernmost region of Lapland. 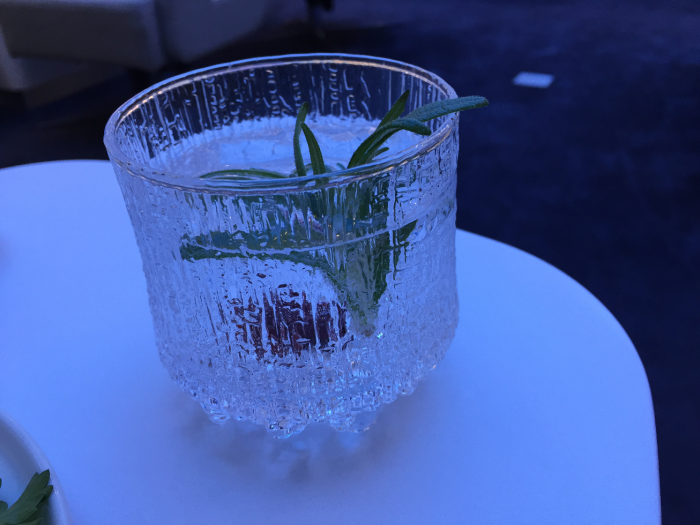 After a light snack and a couple of drinks in the lounge, I headed to the gate for boarding.  The flight to New York was operated by an Airbus A330-300.  Boarding was divided between Business and Economy and business passengers were able to enter through a separate entrance which cut down on the amount of traffic coming through (at least the front portion of) the business class section while passengers settled in and stored their baggage. Business is set up in a staggered 2-2-1 and 1-2-1 configuration, so for solo travelers, the best seats would be the single seats on the left side of the aircraft as they sit in the same amount of space that the alternating rows of two seats take up leaving extra room for storage.  There is a Premium Economy section (Economy Comfort) which is set up in the same configuration as regular economy (2-4-2) but comes with 3-5 extra inches of pitch and an upgraded meal and drink service. I chose seat 4A for this flight.

Unlike the previous flight I had taken on Finnair (HEL-ORD about a year before), this plane seemed to have quite a bit more miles and wear and tear on it, which was evident when you looked at the surfaces surrounding the seats. However, the seats themselves were very comfortable and the bedding provided was more than adequate. 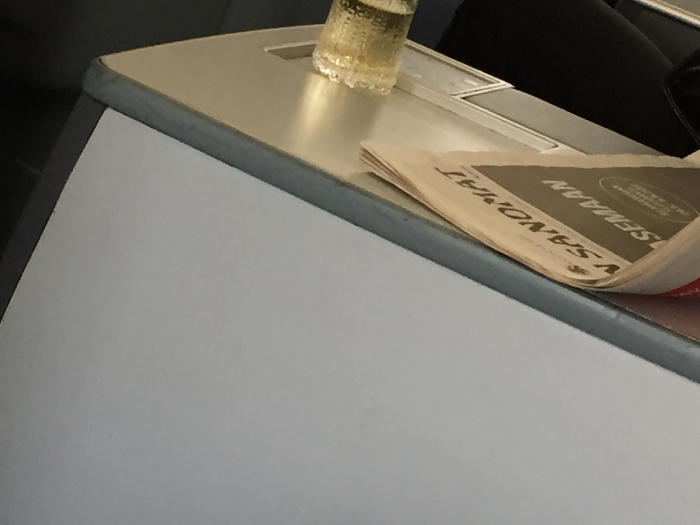 There were 2 meal services on this flight which departed Helsinki at 2:10pm local time (+7 hours from New York, +1 hour from Central Europe) and was scheduled to arrive in New York at 3:50pm New York (Eastern) time. The first was a full lunch service, and a snack was served a little more than an hour before landing.  To start off I tried Finnair’s signature drink, the Blue Sky, which is made from Lapponia Blueberry Liqueur and Nicolas Feuilatte Brut Grande Reserve Champagne, and includes real blueberries floating on the top as well. This was accompanied by a small amuse-bouche type starter.

This was followed by a salad and appetizer, which was made up of salmon and whitefish with cucumbers and a spicy horseradish type sauce; this was very tasty with just the right amount of kick. 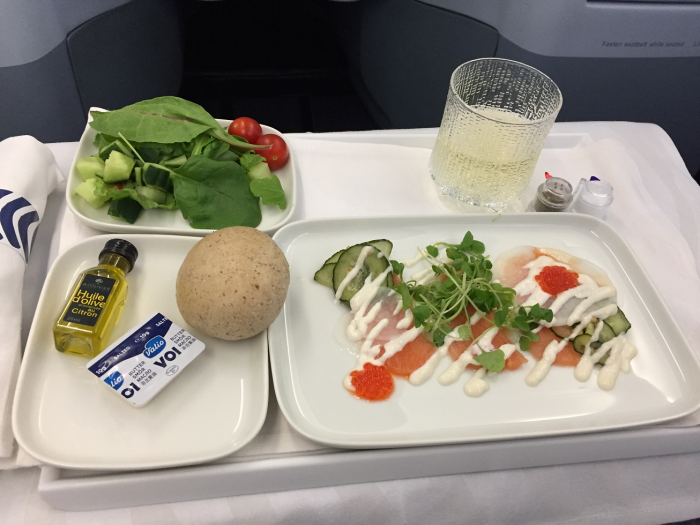 I forgot to take a picture of the menu so I don’t know what the other dinner options were, but I went with the least daring option and chose a meat lasagna, which was good, but nothing out of the ordinary. 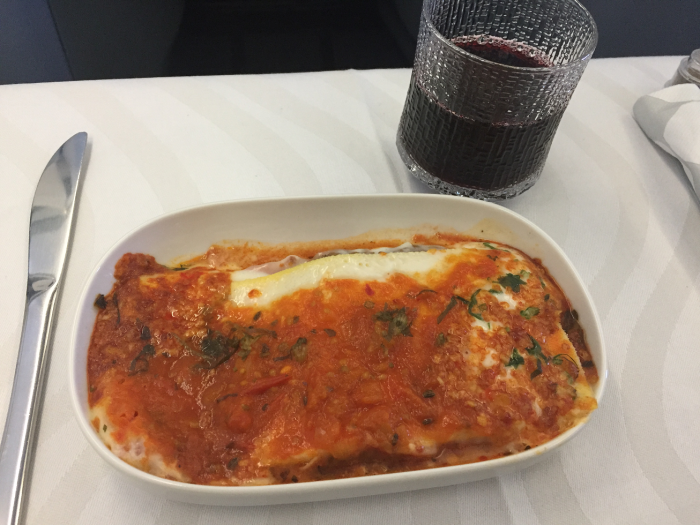 The main course was followed by cheese and Finnish vanilla ice cream.

The snack served prior to arrival (no choice for this service) consisted of a shrimp salad served with cut fruit on the side. 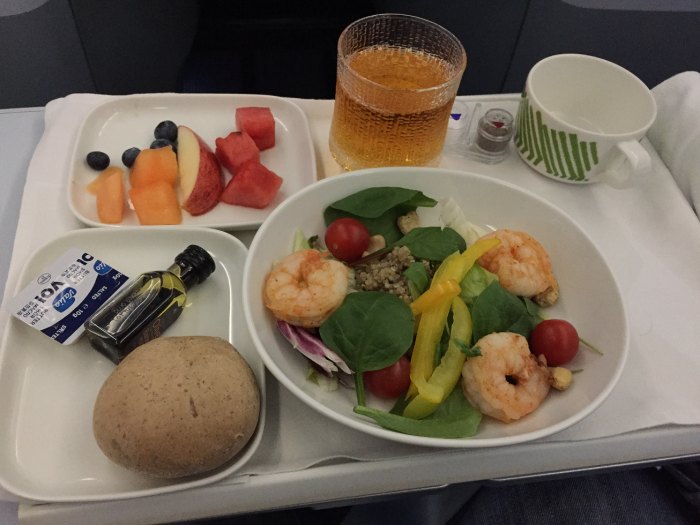 Last but not least, the amenity kits on Finnair are very basic, and probably one of the least filled of any amenity kits I’ve seen for longhaul routes.  Only an eye mask, dental kit, earplugs, moisturizer and lip balm was included, but the card inside said other items were available on request from the cabin crew: slippers/socks, shaving kits, mouthwash, hairbrushes, and makeup remover wipes. 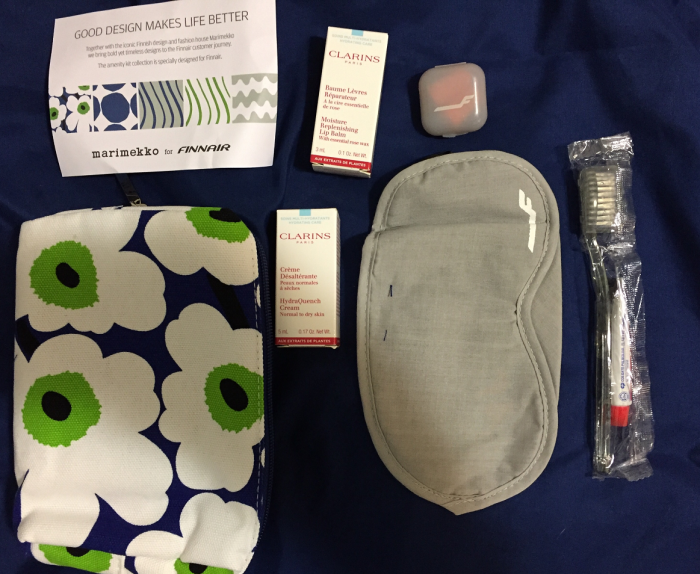 I’ve flown in transatlantic business class on about a dozen or so airlines in the past 5 years, and the Finnair flights I’ve taken were probably two of the best ones of the bunch, and probably the clear winner out of all the major oneworld carriers (the others being American, British Airways, and Iberia).

The geography of Helsinki doesn’t lend well to connecting from southern Europe to North America (unless you need to go out of your way to fly extra miles to earn status like me!) but it’s a solid product and sensible choice for travel either to Scandinavia or between North America or Europe and Asia. I hope to try the Finnair A350 at some point to see how it compares to the somewhat dated A330s.

Airfare of the Day [Business Class] FINNAIR Los Angeles to Bangkok from $2,629