A families journey with Jet Blue has turned awry after an incident where their toddler kicked another passengers seat which saw them being kicked off the plane after a discussion with the cabin crew. 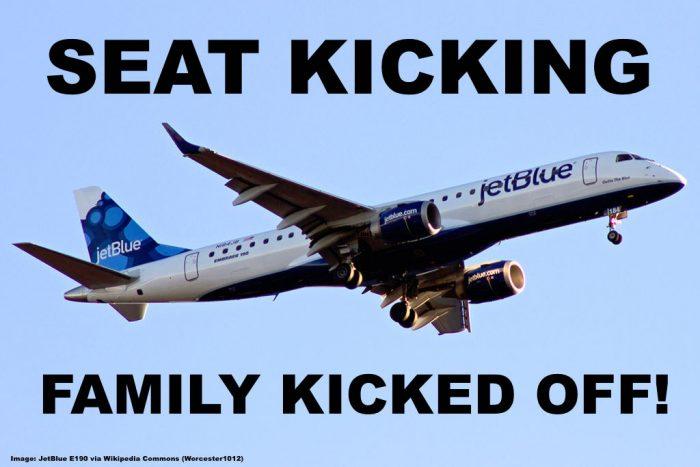 The family of five including the 1-year-old daughter boarded the flight and once seated the toddler started to kick the seat in front which lead to the passenger being irritated by it.

What then followed was an argument between the two adults, the cabin crew and another passenger who got involved leading to the point where it was decided that the passengers will be ejected from the aircraft.

A woman claims that she, her husband and three children were kicked off a JetBlue flight from Fort Lauderdale to New York on July 2 without any explanation.

The family’s attorney, David Templer, said that his clients, Tamir Raanan and Mandy Ifrah, who live in Brooklyn, were heading home after attending a wedding when their 1-year-old daughter, Eden, began kicking a passenger’s seat.

That’s when a flight attendant came over to Ifrah’s family and asked them to get off the plane, the family said in a media release.

“The plane, at that point, just turns back around, goes back to the gate and security from JetBlue gets onto the flight and tells me and my family and I to grab our things and get off the plane,” Ifrah said in an interview with Local 10 News.

A passenger made a video which was later uploaded to Youtube:

There is another interaction captured that took place at the gate after all passengers had to leave the aircraft to resolve the matter:

As can be seen from the videos the woman was already hysterical, blurring over and over again “I have three kids” when asked by the Jet Blue agent to get outside to discuss the matter. If this was the same attitude she had when the initial incident ticked off the passenger who got his seat kicked by their child then I’m not the least bit surprised about what transpired after.

JetBlue said that the adults in the family were making threats, and it was their actions that caused them to be taken off the plane.

“After a verbal altercation that included physical threats and profanities against a nearby customer, the aircraft door was reopened and our airports team politely asked the customers to step off to discuss the situation,” JetBlue said in a statement. “The customers refused repeated requests and our crew members deplaned the entire aircraft. Law enforcement escorted them out of the gate area and we provided a refund.”

JetBlue said the family was “not removed due to the actions of their children.”

“We are investigating whether the customers’ behavior warrants restrictions on JetBlue travel, and we thank our crew members for their professional handling of this unfortunate incident,” the statement said.

The Passengers have another version of what happened.

“Ifrah said JetBlue told the family that they would be booked on a flight the next day, but they would need to find overnight accommodations,” a media release sent on behalf of the family said. “However, JetBlue did not remove their luggage from the plane, leaving them without clothes and baby supplies.”

The family claims when they arrived the next morning for their flight, a JetBlue representative told them that they were banned from all future flights while the incident is under investigation.

In addition, the family said that their luggage was not in New York when they arrived home and that it took a week before their bags were returned.

As for JetBlue’s account of what happened, Ifrah said it’s false.

“That’s not true at all,” Ifrah said. “My baby must have been kicking the chair. I mean, she’s, you know, at that time, she needs a bottle. She’s tired. She’s cranky.”

The videos are relatively clear that at the very least the verbal behavior of the adults was not appropriate. I wish there would have been a video of how the whole thing developed at first. I can’t give much weight to the passengers account of the story if there is no video evidence of them being out of line.

If the parent isn’t able to prevent a one year old toddler from kicking a seat in front then maybe the solution for this is to stay at home or to make sure you get a bulkhead seat. I bet the infant was ticketed as a lap child at that age and it’s absolutely possible to physically restrain a one year old from kicking in such a situation.

It takes more than what in the referenced article has been innocently described in order to get kicked off a plane and being prohibited from the carrier pending the outcome of the investigation.

If the father thinks that other passengers have to put up with having their seat kicked because his child “needs a bottle, is tired and cranky” then he is definitely mistaken. If it’s one innocent kick and he immediately restraints the child then I’m sure nobody is bothered by that to the point of escalating it to the crew. Something tells me here it was more than this and the parents had an attitude about it, resulting in their removal from the flight.