Virgin Atlantic is once again making unfavorable headlines with Chinese consumers after removing an unaccompanied 11 year old boy from a flight after discovering they exceeded the maximum amount of children without a guardian (UM’s). 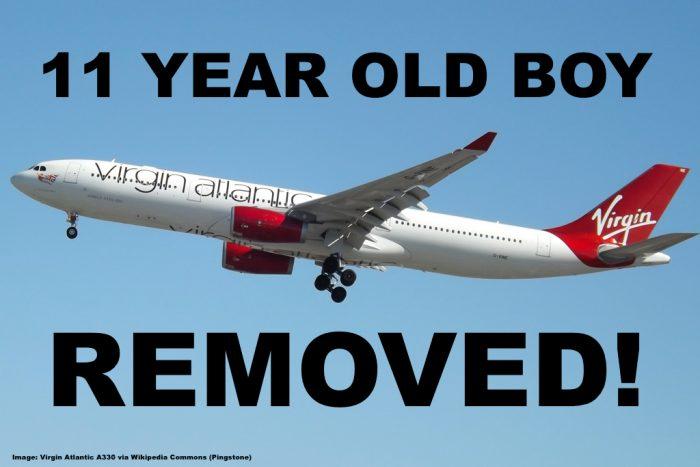 In a very foolish and unprofessional manner the Virgin Atlantic staff got the boy out of the plane after discovering their own mistake of accepting too many UM bookings.

The boy was obviously sad and I’m sure this was a shocking experience for him. Completely disguting behavior from Virgin Atlantic. Such a flight is a great adventure for a child that age and shouldn’t be an ever lasting bad memory.

“Did I do anything wrong? Why did they ask me to get off the plane?” This is the question asked by an 11-year-old Chinese boy who should have been in a summer camp in London by now — if he had not been forcibly removed by crew members on a Shanghai-London Virgin Atlantic flight on July 9.

After an incident last year in which a Chinese female passenger was ignored by cabin crew after being orally attacked by a Caucasian passenger on a flight, Virgin Atlantic is under the spotlight in China again, for “kicking out” an unaccompanied boy after boarding.

The airline said the action was taken because there were “too many unaccompanied minors” on the flight for the cabin crew to take care of. Eight unaccompanied minors was the maximum, according to Virgin, and the 11-year-old boy was the ninth and last to book. …

Is that the fault of the passenger? If Virgin Atlantic is incapable of properly managing their reservation systems and only notices such an error after passengers are seated they should properly react to the situation and suck it up. What is the difference if there is one child more to watch and care for or is the crew incapable of handling that?

Mrs. Liu, mother of the 11-year-old boy, told the Beijing Youth News that she repeatedly checked with Virgin Atlantic beforehand to make sure the boy could board the flight as an “unaccompanied minor.”

“My son was obviously scared,” said Mrs. Liu. “He cried for long hours and woke up with nightmares.”

Airport staff promised her a free return ticket or a 400 euro shopping card as compensation when Mrs. Liu returned to the airport to pick up her son. However, Mrs. Liu denied any follow-up actions afterwards. …

The passenger (or his guardians) are entitled to a full 600 EUR CASH compensation per EC261/2004 regulation for involuntary denied boarding as Virgin Atlantic is a EU carrier flying to the EU in this case. They ovbiously not only completely messed up the entire situation but also attempt to low ball the family with their offer of compensation.

On Tuesday night, Virgin Atlantic China apologized on social media platform Weibo officially, saying it was inappropriate to have informed the passenger after boarding.

However, on the morning of July 21, the apology post had been removed. The latest post was published on July 13 about British intelligent performers, although the comments were all critical of the airline’s actions.

It sounds like Richard Branson has to come out of the woodwork once again to publicly apologize for the actions of his employees. He previously had to step in after the crew tolerated a racial slur against a Shanghai woman departing on Virgin Atlantic from Pudong Airport where another passenger called her a “f**** Chinese Pig” and other verbal abuses. The crew back then didn’t remove the offending passenger and didn’t safeguard the woman properly for the remainder of the flight.

Unprofessional and disgusting handling from Virgin Atlantic in this case. No matter how this came together there are multiple instances where an airline should be able to detect an overbooking with UM’s and take proper action.

Once the passengers (and minors at that) are seated Virgin should have simply owned up to their mistake and accommodated the children instead of traumatizing the boy. I’m sure most of us remember their first flight as a child and how disappointing it would have been if this happened to us.

Airlines really screw up everything these days. Total incompetence plus adding insult to injury with the low ball compensation offer, violating the EC261 regulation.

Virgin Atlantic Flying Club previously launched a new sale of Virgin Points with up to a 70% bonus that is...

Virgin Atlantic Flying Club launched a new sale of Virgin Points, now separate currency among all Virgin-affiliated companies, with up...