When I was walking in Seminyak (Bali) yesterday, I saw a sign announcing the Sarasvati location that is (or was supposed to be) part of Starwood’s Luxury Collection.

I hadn’t seen this property mentioned on Starwood’s website as of late when doing searches along with some properties in Ubud that never seem to get past the announcement phase. 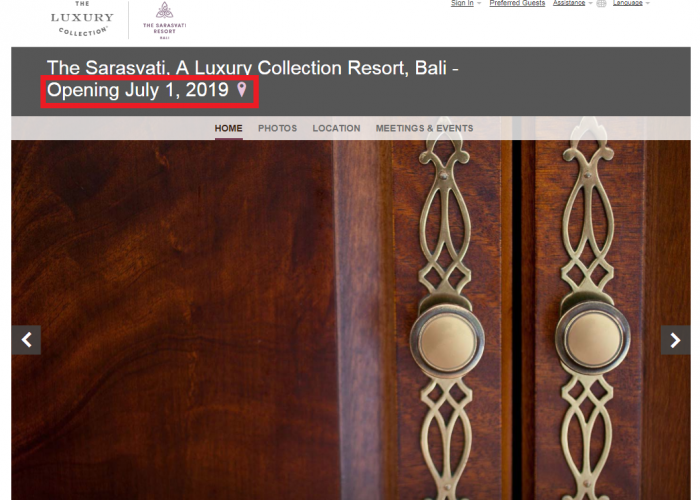 The website seem to think that the property is coming up nicely and ready for July 1, 2019, opening.

Seems that the construction has been abandoned years ago based on the vegetation on the ground. It doesn’t appear that anything would be happening on the site as of yesterday.

Four Points by Sheraton Bali, Kuta joins Starwood’s already dynamic and robust portfolio in Indonesia. The company currently operates 14 properties nationwide under its Sheraton, Westin, Le Méridien, St. Regis, W Hotels and The Luxury Collection brand flags. In the next four years, Starwood will continue to ramp up its growth in Indonesia, with plans to open 12 additional hotels across the country. Four Points by Sheraton Bali, Kuta marks Starwood’s seventh property in Bali, with another two, The Westin Ubud and The Saraswati, a Luxury Collection Resort, Bali, slated for opening by 2016.

They must have announced this project sometime in 2013 or 2014 because the mention in 2015 is on related press release about Four Points property that did actually open last year. The Westin Ubud has completely disappeared from the Starwood’s website.

It is not uncommon for hotel projects to be very late and sometimes never materialize due to business and economic conditions (developer out of money or having other issues).

Lets hope that this project does indeed materialize because the location in Seminyak is good and the real estate is wasted with unfinished construction at the moment. It is sad to see these unfinished abandoned projects.

There should be another hotel under the same name coming up in Ubud in the coming years. I hope that it doesn’t have the same fate as the Westin project in the very same area that was pushed back several times before vanishing altogether.